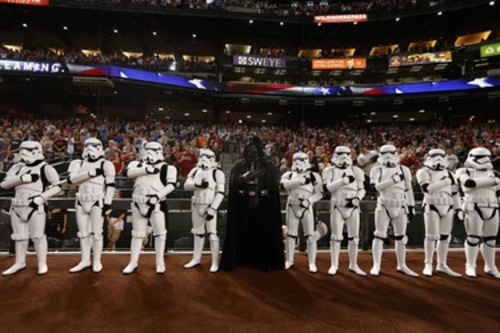 Days left until The Force Awakens awakens us: 124. Until then, here is just one more crumb to chew -- Why would anyone in their right mind join the Empire after its fall post-Return of the Jedi?

Abrams then paints the First Order, the new regime that have replaced the old Empire, as basically wackjobs who think the iron grip of the Emperor was pretty OK.

"[T]he interesting thing for me, is the history of these characters is these films, is the history that we know. So they're aware of what's come before. And there are, I would argue, those who feel like what the Empire was doing was righteous and had something not gone wrong, as we all know it did, they probably would have succeeded. And it might be worth trying again."

The definition of insanity is doing something over and over again and expecting different results. Just saying, First Order. Just saying.

Why Would Anyone Join the Empire in 'The Force Awakens'?
A Complete Ranking Of 'Star Wars' Characters
1 / 20
20. Mon Mothma
A leading figure in the Rebel Alliance, Mon Mothma briefs the rebel forces before the Battle of Endor. Remember: Many Bothans died to bring us these rankings. <em>-CG</em>