On the morning of April 8th the Federal Court in New York City will hear the oral argument in a Federal suits against the Women's Studies Program at Columbia University. 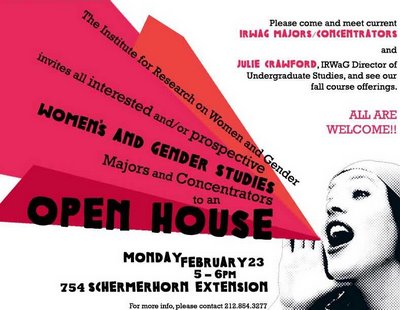 The lawsuit claims that students, male and female, as well as the nation, are being harmed by the misapplication of monies under Title IX. which states that: "No person in the United States shall, on the basis of sex, be excluded from participation in, be denied the benefits of, or be subjected to discrimination under any education program or activity receiving Federal financial assistance..." (Title Nine is most commonly evoked to ensure equal opportunities for girls and women in high school and college athletics but is obviously being used here to challenge the use of funds for women's education) There is a demonstration being planned to support this lawsuit and the preceding day there will be a special seminar and a webinar at Wagner College in support of this issue.

At first glance this lawsuit seems to be ridiculous. We all know that programs such as this one have been part of social change which has brought well deserved equality to women from the early suffrage movement to where we have seen a viable woman candidate for President of the United States. Certainly in education we have seen the number of women undergraduates in the United States outnumber men.

The number of women in post graduate programs continues to increase, something that I have
certainly seen in my own profession. I have also personally observed this as my wife, daughter and daughter-in-laws have all received professional graduate degrees (two them at Columbia). I know that full equality has not yet been achieved as illustrated by the smaller proportion of women in senior academic posts throughout the nation. All the more reason to continue these outstanding Women's Studies Programs.

So Who is Objecting and Why ?

Wouldn't you know it, it is a group of men. One of their strongest advocates is a psychiatrist Dr. Edward Stephens who believes that ..."students both male and female, (their) parents and their children, and our nation itself, are all being harmed by the misapplication of monies under Title IX."

The argument of this group, of mostly men, appears to focus on what they have identified as a failure to recognize particular areas where males (both young and old) have been treated unfairly by our social and political system. Particularly, in regard to education, they believe Title IX has been used to gain the resources of the Federal government for gender equality projects for women only. Whereas, in fact, gender equality should apply equally to men in education.

Another spokesperson for unfair treatment to men is Dr. Gordon Finley a psychology professor from Florida. He feels that the Obama administration has bypassed boys and men. As an example he notes that the Lilly Ledbetter Fair Pay Act was passed to eliminate the purported gender pay gap, whereas the most recent study by the Department of Labor indicated there was not such a gender pay gap. He stated that in the Obama's Health Care Plan there will be ten Major Offices of Women's Health and zero Offices of Men's Health. He goes on to note that epidemiological health data shows that boys and men are far more in need of special attention as there are higher death rates in men in nine out of the ten of the leading causes of death. There is a greater suicide rate in men and men have a lower longevity.

In areas in addition to health and education , Finley has documented that the President had proposed a 22% increase in funding for female victims of domestic violence on top of the large amount already spent in this area. He refers to research that shows that men and women initiate domestic violence at approximately equal rates and men represent at least 40% of the physically harmed victims. In addition, the federal government declines to fund equal protection and support for battered husbands and battered men.

We Are a Country of Checks and Balances

I don't claim to be knowledgeable in all the statistics that apply to this issue.
I appreciate what the women's movement and particularly what groups within our academic universities have done to influence our understanding of these issues, public opinion and ultimate changes in public policy. University Women's Studies came into being to fill a vacuum in the need to educate students about inequities that have existed. Similarly men's groups have brought attention to disparities in this country as exemplified by the movement to fund research and treatment programs for AIDS which was spearheaded by groups consisting mostly of men.

I don't believe that whatever happens in that Federal Courtroom in New York on April 8th should diminish or undermine the importance of the Women's Study Group at Columbia and at other universities. But perhaps it will bring attention to a deficiency in the needed support of programs for boys and men. We love and value all our children, parents, spouses and friends regardless of gender. Our system of government allows legal and social protest in order to bring about change whenever we detect unfairness to people.

This may be one of those times.