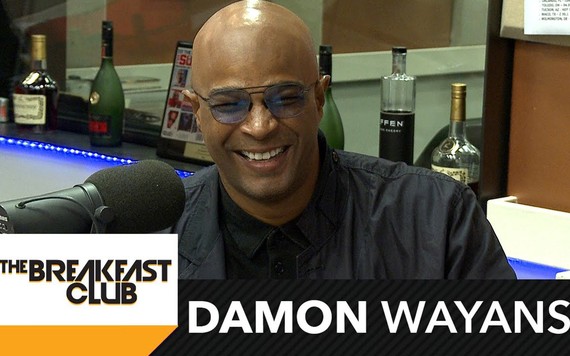 You know what no one was talking about last week? The Bill Cosby scandal.

You know what people are talking about again, thanks to Damon Wayans' bizarre, sexist and completely ineffective attempt at discrediting some of Cosby's accusers? The Bill Cosby scandal.

The fall of "America's dad" is a relatively evergreen story; it's created trauma, confusion, debate, teachable moments. And it's certainly a topic we should continue to explore: how the culture of Hollywood and society-at-large could allow something like this to happen, the unreasonable ways in which we canonize celebrity and our knee-jerk inclination not to believe accusations of rape, despite statistics that indicate that most accusations are, in fact, true.

Yet, until Wayans sat down with The Breakfast Club, it had gotten pretty quiet on the Cosby front -- much like Wayans own career as of late. A gifted comic from an immensely talented family, we haven't heard much from the former sitcom star in recent years. That the 55-year-old would see fit to go viral by referring to some of the elder comedian's accusers as "unrapeable" and bitches" boggles the mind for many reasons, perhaps the biggest one being Cosby's admission during a deposition that he has purchased drugs in the past in order to "have sex" with women, which aligns with most accounts from accusers.

But what I find most curious about Wayans horrid take on the situation is that Bill Cosby probably wouldn't spit on him or any of his famous kin, even if they were on fire. Cosby has made it very clear for decades that he hates raunchy humor and profanity, both of which have been a cornerstone of the Wayans brand since In Living Color. When asked about the state of sitcoms in 2009, Cosby credited Kelsey Grammer as "about the only one I see in the sitcoms that is still trying to keep the intellect and the writing." At that point, Grammer had 3 post-Frasier projects that had failed spectacularly, but Wayans, like fellow swear word-loving comedians Chris Rock and Bernie Mac, had experienced moderate success with family-friendly Black sitcoms that had earned Cosby Show comparisons. All shows remain in syndication and ostensibly could fill programming gaps left by the decision of numerous networks to stop airing Cosby's own legendary show.

Cosby famously refused to accept the Mark Twain Prize for American Humor for years, because of a show that (in honoring Richard Pryor) featured bawdy humor. Also, when Lisa Bonet became pregnant while appearing as Denise Huxtable on A Different World, it was Cosby who allegedly shot down Debbie Allen's idea of allowing the character to become a young mother.

What do you think he might have to say about Damon Wayans, who appeared on In Living Color as the incarcerated philosopher Oswald Bates and the homeless Anton Jackson? And who depicted his own son's experiences as a teen parent on My Wife and Kids?

Yeah, it's hard to imagine Cosby would have many kind words for any Wayans brothers, sisters or cousins. That's kind of his thing, outside of hyperbolic moralizing and allegedly doing horrific things to women -- he hasn't publicly shown much support for Black comedians or sitcoms over the years.

So what would inspire Damon Wayans to fall on this sword in a moment in history in which one could easily say "I'd prefer not comment?" Why refer to women "unrapeable bitches," when it's impossible not to imagine that this would be met with backlash at best and a loss of opportunities at worst?

Perhaps this is a sad attempt of trying to curry favor from a man who so clearly turned his back on younger Black comics (at a moment during which he has few public champions and may be more willing to embrace them.) Or maybe Wayans just honestly believes the horrible things he said. Either way, if there is any celebrity out there who has a Cosby defense on the tip of his or her tongue, if I can't appeal to your humanity and get you to consider the likelihood that Cosby has harmed many women over the years, then at least stop and think about the hit your finances may take if you become known better known as a rape apologist than for your work.

Jamilah Lemieux is EBONY.com's Senior Editor. Views expressed here are her own.