Just in time for the all-important May sweeps period, a local television anchor somewhere is bound to open a newscast with a question specifically designed to simultaneously titillate and scare the crap out of you. "Does a pedophile live on your block?" the menacing voice will intone. "Are your children safe?"

The answer, invariably, is "probably" and "probably not." If you tune in, you'll confront a terrifying graphic that the station's self-glorifying "investigative reporter" has cooked up showing a map crowded with dots. Each one, you'll be told, represents a registered sex offender just waiting to snatch and rape your kids.

Here's the problem: Those sex offender registries that are sensationalistic catnip to news producers are a technological and inaccurate mess that nobody in the media or public should trust. Law enforcement officials, sex-crimes researchers and politicians all know this, and several admitted as much to me for an actual piece of investigative reporting that took nearly a year to finish and went live last week at TakePart.com.

"I kept asking how much money we were spending to make these mistakes," said former California state Sen. Tom Ammiano, who was term-limited out of office last year after years of failing to advance reforms. "I hated being an accomplice to these inaccuracies. But nobody in politics wants to be seen as being soft on sex offenders."

Turns out, what we all think of as "the sex offender registry" is actually hundreds of individual databases -- every state, most cities and large counties and many individual police departments all have their own -- that almost never speak to one another. Jurisdictions routinely declare offenders as "non-compliant" without checking if they are properly registered elsewhere, incarcerated somewhere or dead. It's stunningly easy to spot listings with conflicting physical descriptions for the same people -- different heights, eye colors and tattoos are commonplace -- and with incorrect charges or mugshots. Doing so has become a full-time avocation for one childhood sexual abuse survivor, Tim Fisher of Las Vegas, who contacts police with fixes for inaccuracies he's able to find largely through assiduous Googling. Yet his one-case-at-a-time efforts are modest balms to a wreck of a "system" with more than 800,000 entries.

What's more dismaying is the indifference shown by the Sex Offender Sentencing, Monitoring, Apprehending, Registering, and Tracking (SMART) office at the U.S. Department of Justice, which oversees the National Sex Offender Public Website. Despite their name, the SMART office declaimed responsibility for ensuring the accuracy of the information found through the NSOPW. The site, says a SMART executive who refused to be named, is just "a pointer system to all of the jurisdictions' public websites. ... It's not a database. It's not a registry. It's simply a search engine that allows you to search on all the different public websites with one search."

It's impossible from the outside to know just how screwed up the registries are because almost nobody publishes any assessments. One exception is Vermont, where the Legislature has prohibited the listing of addresses on its sex offender registry until, per language of the law, a "positive audit" of their database's accuracy. Audits conducted in 2011 and 2014 both came up dreadfully short; reviewers found "critical errors" in more than 10 percent of the entries.

Perhaps the easiest way to explain this is to show it. Mike Tyson is the nation's most famous convicted rapist. He went to prison in Indiana. And yet, this: 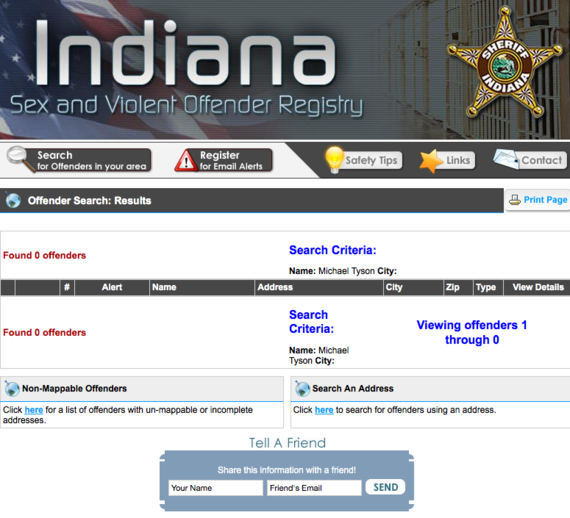 These mistakes create a myriad of real-world problems. Sex abuse victims who visit these sites, sometimes decades after the crime, can be re-traumatized to learn their attacker is "non-compliant" -- Is he on the run? Is he coming for me? -- or to run into multiple, confusing listings. Offenders who try to remain current can and have been arrested for non-compliance. Innocent people who live at addresses where sex offenders are mistakenly said to live or actually once did live have been targets of epithets and vigilante violence by the unnerved neighbors and others. And, of course, the extent of mistakes make these registries effectively useless -- or, worse, misleading -- to parents who think knowledge of nearby rapists will protect their families.

Fisher, who for my piece allowed me to follow him as he went to confront the man convicted in 1984 of molesting him, believes the registries could be worthwhile. Attorney Patrick Morrissey, who has filed several lawsuits after Chicago police turned away hundreds of sex offenders trying to register because the police didn't have enough clerks to process them, thinks there's too many ways for the information to go bad for this to exist without a dramatic overhaul. "It's almost a system created to re-incarcerate people," he said.

Until that overhaul -- which SMART officials seemed entirely uninterested in pursuing -- what's on these registries ought to be taken with great skepticism. Yet the folks most responsible for publicizing their existence and their content, the local TV newsmedia, have largely found caution and fact-checking too inconvenient. They lazily hide behind the fact that the registries and their nifty, scary maps come gift-wrapped from police sources and, thus, it can be used without question.

The standards should be higher. There are many other, better ways to help parents protect their children from stranger danger. Scaring the crap out of them with faulty information may be good TV business and great politics, but it's lousy both as journalism and public policy.