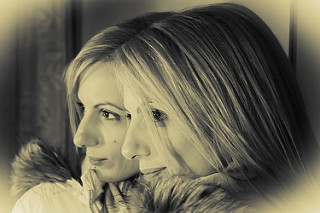 Long-time friends Amy, Bailey, and Casey are having their weekly lunch together when Amy says "I don't think I'm very beautiful."

Have you ever seen something like this? Regardless, before moving on, try to guess what will happen next. What kind of future would you predict?

I've often seen such a scene. My experience would lead me to predict...

"Of course you're beautiful!" they reassure her. Granted, people sometimes say that just to be nice, but I'll be talking about those times when they are sincere.

How can Bailey and Casey see Amy as beautiful when Amy doesn't? Some great insight into beauty, perhaps?

Not at all! Consider what typically happens next.

"I only wish I was as beautiful as you, Amy," Bailey reassures her.

The usual continuation of the scene reveals that Bailey is just as self-conscious as Amy is, and Casey's probably the same. All people have this natural tendency, to judge their own appearance more harshly than they do others'.

If you were present, I'd ask you to guess what causes us to judge ourselves this way. Indeed, I have so asked from time to time, and found most people blame the same thing.

Think about it; what does everybody blame when people are self-conscious about their beauty?

The media! The blasted media and the narrow standard of beauty it imposes.
There are two effects; the media is responsible for only one, and not the one we're talking about.

We were talking about a separate effect, where people tend to judge themselves one way and everyone else another. Is it proper to blame the media for this also?

Picture what would happen if the media were to blame.

First, everyone assimilates the media's standard of beauty. They judge beauty by that standard. That's the theory. So far so good.

What does this cause? They look themselves over in the mirror. They see that they don't fit the standard. Eventually they sigh, and give up. "I'm not beautiful," they think.

But what happens when they look at other people?

Bailey looks at Amy. Amy doesn't (as hardly anybody does) fit the standard of beauty. So...Bailey concludes that Amy isn't beautiful?

That's not what happens! Amy looks fine to Bailey, and vice versa! The media effect doesn't look like this one. We might get our standard of beauty from the media, but the question remains, why do we hold ourselves to it more than we do everyone else?

We need something that more fully explains why Amy judges herself one way and everyone else another, something mapping the territory of reality.

A combination of two things.

1. Amy's beauty is very important to her.
2. She knows her looks better than others do.

Amy's beauty affects her own life. Other people's beauty doesn't affect her life nearly as much.

Consider how Amy looks at other people. She sees their features and figure, whatever good and bad parts stand out, a balanced assessment of their beauty. She has no special reason to pay extra attention to their good or bad parts, no special reason to judge them any particular way at all. At the end of the day, it just doesn't much matter to her how other people look.

Contrast that to how much her appearance matters to her. How we look affects how people perceive us, how we perceive ourselves, how we feel walking down the street. Indeed, researchers have found that the more beautiful we are, the more we get paid, and the more we are perceived as honest and intelligent.

We hate losing even more than we love winning. Loss aversion is when we value the same thing more or less based on if you're going to gain it or if you risk losing it.

Well, studies show about 61% of people in this situation choose to gamble on keeping everything over a sure loss.

People tend to like keeping the $600 more in this deal, only 43% tend to gamble.

Do you see the trick?

Amy carefully checks on all her flaws each time she looks in the mirror. The balanced beauty assessment that Amy graciously grants others is lost when she views herself. She sees herself as less beautiful than everyone else sees her.

Plus, whatever has your attention seems more important than what you're not paying attention to. It's called attentional bias. It's a natural fact that if you spend most of the time carefully examining your flaws, and only very little time appreciating your good points, the flaws will tend to weigh heaviest in your mind.

Now, the second reason Amy judges her own beauty under a harsher gaze.

Amy doesn't just have more cause to look at her flaws, she has more ability to do so.
Who knows you like you? If you paid someone to examine flaw after flaw in you, they wouldn't know where to look! They'd find one, and then hunt for the next one while all the beautiful parts of you kept getting in the way. There's that balanced assessment we have when we judge each others beauty; there's a limit to how judgmental we can be even if we're trying!

Indeed, it takes years, a lifetime, even, to build up the blind spots to beauty, and the checklist of flaws Amy knows by heart. She can jump from one flaw to the next and to the next with an impressive speed and efficiency that would be fantastic if it wasn't all aimed at tearing down the beauty before her.

Your intimate knowledge of your beauty could just as easily let you appreciate your subtle beauties as your subtle flaws, but thanks to loss aversion, your attention is dialed up to to ten and stuck on ruthless judgment.

And so it is. Amy's loss aversion focuses her attention on flaws. This attentional bias makes her misjudge her beauty for the worse, the handiwork of her emotional self. Then her unique intimacy with her appearance lets her unforgiving judgments strike more overwhelmingly and more piercingly than could her worst enemy. Indeed, in this, she is her own worst enemy.

Since others don't have the ability to criticize us like we can, and they don't have any reason to pay special attention to our faults, their attention towards us is more balanced. They see the clearest good and bad things

How can Amy achieve a more natural, balanced view of her beauty? It's a question which has troubled me at times, as even the most beautiful people I know are so often so down about their looks. How can it be? I've often been in that scene offering my assurances, and know well the feeling when my assurances are rejected, and my view of another's beauty is knocked away and replaced with a gloomier picture. A sense of listless hopelessness advances as I search for a way to show them what I see. How can I say it any better than I already have? How can I make them see...?

If we can avoid the attentional bias on flaws, then we can make up for our loss aversion. We'll always see ourselves more deeply than most, but we can focus on the good and bad. For every subtle flaw we endure a subtle loveliness we can turn to.

Next time examining her form and features in the mirror, Amy intentionally switches her
attention to the appreciation of what she likes about herself. She spends as much time on her good points as her bad. She is beginning to see herself with the balance others naturally see her with.

All people can do the same. A balanced attention will counter our natural loss aversion, and let us see ourselves as others already do.

As you practice seeing with new eyes, let the perspective of others remind you what you're looking for. Allow yourself to accept their perspective of you as valid, and probably more balanced than your own. Your goal to have a balanced perspective may take time, but take comfort in each of the little improvements along the way.

Questions to consider
• What would happen if only the effects of the media were in play without the effects of loss aversion? Or vice versa?
• How can you remember to balance your attention when you look in the mirror?
• What other mistakes might our loss aversion lead us to?
• How else might you achieve a more balanced perspective of yourself?
• Whom do you know that might benefit from understanding these ideas?

Bio: Dr. Gleb Tsipursky runs a nonprofit that helps you reach your goals using science to build an altruistic and flourishing world, Intentional Insights, authored Find Your Purpose Using Science among other books, and regular contributes to prominent venues; and is a tenure-track professor at Ohio State. Consider signing up to the Intentional Insights newsletter; volunteering; donating; buying merchandise; and/or support him personally on Patreon. Get in touch with him at gleb@intentionalinsights.org.