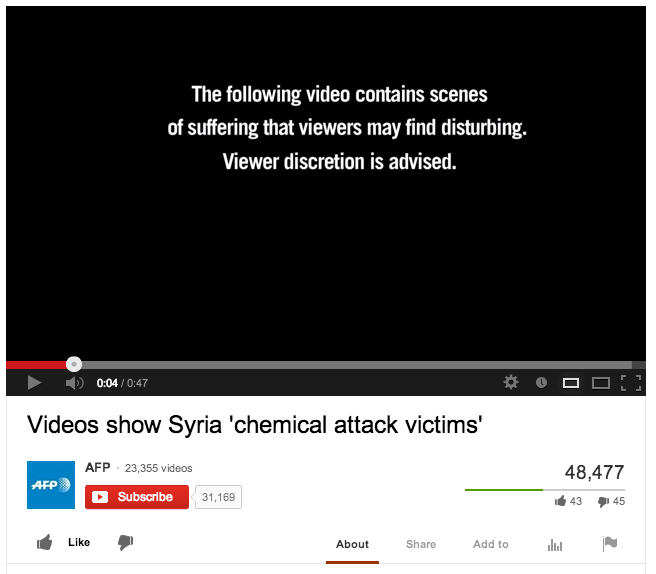 A global catastrophe has risen to the world's consciousness because of photo documents of it.

But are the images too horrible to look at? Are we already turning away?

While the war in Syria has received an on-going hum of news coverage since the start of the conflict against President Bashar al-Assad's regime in March 2011, Syria hasn't often been at the top of the news.

That's an oversight especially troubling considering that the number of registered child refugees fleeing Syria's violence has topped the 1 million mark, according to the UN, and more than 100,000 people have been killed in the conflict so far. That amounts to a war that has wiped out the equivalent of a city the size of Boulder, Colorado and sent roughly the same number of children as the population of Dallas, Texas fleeing from their homes.

But now there are photos and videos -- from journalists, freelancers and citizens alike -- pouring out of the suburbs of Damascus showing hundreds of alabaster bodies of children and adults who appear to have been killed by chemical attacks and showing scores more who are twitching and shuddering in what appear to be desperate measures to breathe.

Why have media published them? After all, it is a daily occurrence for newsrooms to make decisions not to show images of the world's realities, in part because they know that many, perhaps most members of their audiences do not want to see photos of violence. Indeed there are cautionary tales from almost every newsroom about outraged readers and viewers stopping their subscriptions or announcing the end of their broadcast or online loyalty to a news outlet because they found a certain published photo offensive.

So why have media been showing the photos from Syria?

First, because the photos and videos are sensational, in the most serious use of that term: the images show infants, children and adults in the suburbs of Damascus killed and injured by what appears to be a gas attack. There is real danger to democracy when journalists withhold news that has implications for our security, even when that news is disturbing, uncomfortable or overwhelming. It is especially on such occasions that there is a desperate need for information and transparency.

Second, media have published the images because, as outlets like The Atlantic Wire noted, they "are the only evidence we have of the devastation." With no formal UN or other international confirmation yet of whether chemical weapons really were used and no certainty yet about who may have deployed them, the photos appear to be -- even in our pixel-manipulating age -- the best evidence so far that a war crime has been committed. As one reader commented about a video of a stricken young girl that appeared in The Atlantic Wire:

We'd like to believe that it was a fake video... so that the horror depicted could be unreal. I fear this is a delusion. There are over 130 videos of the same event on YouTube this evening, some showing preschool children with pinpoint pupils, convulsing, twitching, foaming at the mouth like poisoned insects, before dying in the arms of their doctors and parents. There's no plausible way to fake such footage involving children so young.

But why should you subject yourself to these horrifying still and video images?

Because this event is happening in our time and our world. If political leaders anywhere believe that the use of chemical weapons is a viable option to subdue opposition, it should be unthinkable that the rest of us be in ignorance of that.

Reuters reported that if the Syrian deaths are confirmed to be by gas, it would be "by far the worst reported use of chemical arms in the two-year-old civil war." The deaths would make the Syrians the victims of the most massive known use of chemical weapons since Iraqi leader Saddam Hussein dropped chemical weapons on the town of Halabja on March 16, 1988, an attack that killed an estimated 3,200 Kurds. And that attack? It was the most massive single gas attack since the World War I battle of Ypres, Belgium on April 22, 1915 when the German use of chlorine gas killed 5,000 French-Algerian troops and injured another 10,000, many of whom were disabled for the remainder of their lives. Wrote one correspondent about that attack:

Hundreds, after a dreadful fight for air, became unconscious and died where they lay -- a death of hideous torture with the frothing bubbles gurgling in their throats and the foul liquid welling up in their lungs. With blackened faces and twisted limbs, one by one they drowned -- only that which drowned them came from inside and not from out.

Photos exist of the victims of both those earlier attacks -- and on both those prior occasions when the images finally emerged, they not only served to confirm the use of poison gas but served to rally the world and make legal cases against the perpetrators of such attacks. Ten years after the use of gas in World War I, for example, when the photos of the gas victims were starting to emerge, 29 nations signed the Geneva Protocol outlawing the use of poison gases in war. (Sadly, it was another 50 years before the US Senate ratified the agreement at the end of the Vietnam War in 1975.)

When the best available evidence for a major news event is visual, and when that visual evidence is not itself an agent of fear-mongering (such as videos made by terrorist groups) journalists have the responsibility to publish that visual evidence and we the adult audience have the responsibility of looking at it -- forewarned of the horrors to be seen perhaps, but not coddled into a comfortable obliviousness.

Today the news is moving beyond the photos from Syria. Other events and issues clamor for our attention, including stories and questions about possible humanitarian abuses on all sides of the Syrian conflict.

But let us fight against compassion fatigue for the victims outside Damascus, even if the evidence is hard to look at, the situation is complex, and it appears that there are no political actors with absolutely clean hands.

Let us be witnesses to what is happening, and let us remember, so that when at some future date more confirmation comes that a crime against humanity has been committed, not only the perpetrator can be brought to justice, but we the people know enough to hold every political leader accountable to humanitarian standards.