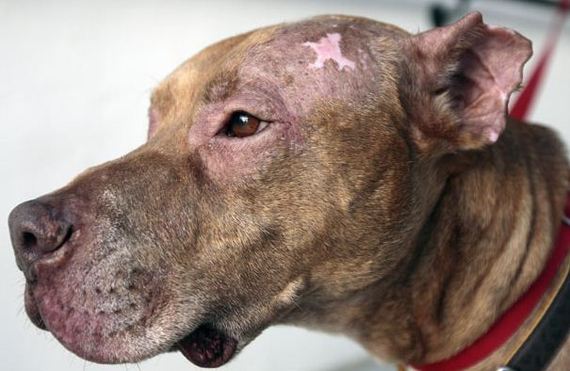 Once upon a time, Louis Vuitton the Pit Bull was named "Cain". He was given away to the Daniels family on June 4th, 2007 and his life drastically changed three months later.

On the morning of September 7, 2007, in a fit of rage at his mother, Juan Daniels tied Louis to a fence and began beating him with a stick. The stick soon broke so he picked up a shovel and began hitting him with the blade allover. Louis had cuts to the top of his head and nose from the side of the blade.

Daniels then doused Louis with lighter fluid and lit him on fire. The fluid ran down the dog's back and puddled on the ground beneath him where it became a pool of flames. Louis was tied so he had no way to escape the flames.

His back left leg was completely engulfed and the pain was so intense he tried to bite his leg off. The pads of his feet and toenails were all burned off as well as his ears. His nose, eyes and forehead were badly burned, not to mention his entire underside where the flames were the most intense.

Fortunately, Daniels' 13-year-old sister was in the backyard and witnessed the horrific scene. She ran into the house and called 911. The Police and Fire Departments responded to the call and a Humane Officer from the Montgomery Humane Society, Matthew Cooper, was contacted by the 911 operator. He arrived soon after because he happened to be three minutes from the scene.

Following the smell of charred flesh, he went to the backyard; the flames were out and Louis remained chained to the fence with his little body still smoking.

Officer Cooper took him and rushed to the nearby Golden Animal Hospital. Sitting in the back of the truck, every time Officer Cooper turned to look, Louis would wag his tail. When he was led in the backdoor of the hospital, the first thing Dr. Holladay Simmons and the staff noticed was that even in excruciating pain, his tail was wagging. 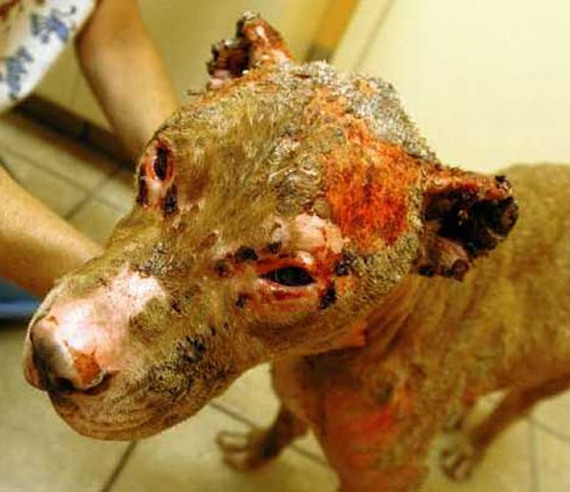 Louis Vuitton at the veterinary clinic where he was treated after being sprayed with lighter fluid, set on fire and beaten in September 2007.

With full-thickness burns over 70 percent of his little body, Dr. Holladay was prepared to euthanize him to relieve him from the pain. She was in tears, composing herself to do what needed to be done. Louis looked into her eyes with hope and determination, and a tail that never stopped wagging.

The hunt for Juan Daniels was on. The 20-year-old was on the run and law enforcement officials from all over the State of Alabama were searching for him.

The reason Daniels was angry? His mother wouldn't let him use the family car.

Within days, U.S. Marshals located him hiding out in Tuscaloosa. He was arrested and brought back to the Montgomery County Jail. It would be 16 months before he decided to plead guilty to Animal Cruelty.

On January 30, 2009, Juan Daniels was sentenced to 9-1/2 years in the Alabama Department of Corrections. It was the first case to be sentenced under Alabama's Gucci's Law which carries a maximum of ten years for Animal Cruelty. 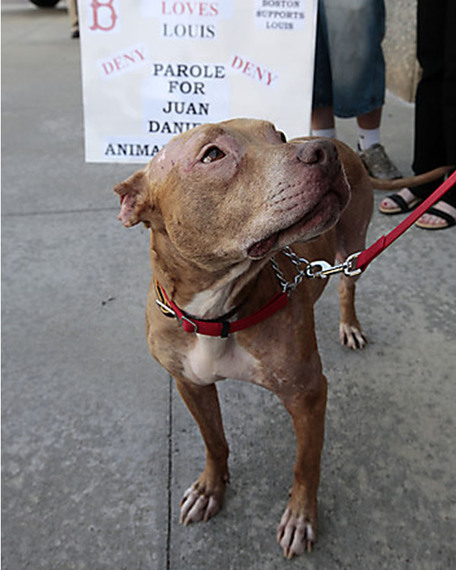 Unfortunately, Daniels served only four years before being released in November 2013. Louis' family and supporters were appalled by the early release but there wasn't much they could do.

On February 12, 2015, Daniels drove a 2004 GMC Yukon into an apartment building in Montgomery, AL. Daniels was fighting with a man and intentionally drove the SUV into the apartment in an attempt to hit the man. Instead, he hit 6-year-old Aiden Howard. Sadly, Aiden died from his injuries 10 days later. 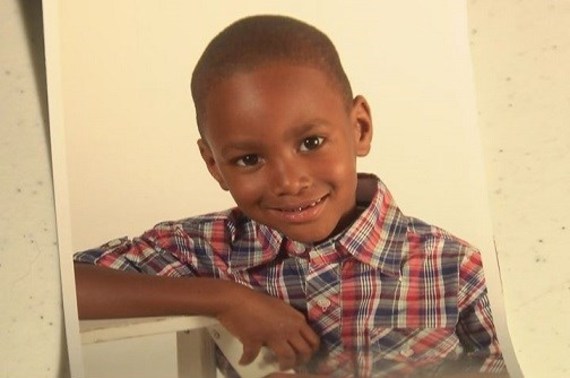 Again, Daniels fled. This time the manhunt was for an armed and dangerous murderer. He was finally captured by U.S. Marshals on March 5 in a suburb of Atlanta. He will be charged with capital murder.

Everyone questioned why he was released early despite being denied parole in 2010 due to a string of disciplinary problems and "egregious" behavior in prison.

Studies have shown that those who abuse animals rarely stop there; they will escalate. It is an aggressive and antisocial behavior, a signature pathology of the most serious violent offenders and a reliable predictor of violence against people. Juan Daniels is proof. 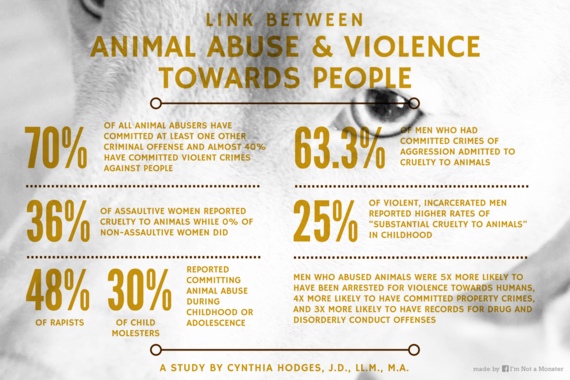 Unfortunately, he's not the only one. The frequency and ferocity of abuse is not letting up across the country:

California: July 4, 2013 -- Indy, a 3-year-old dog was found with third-degree burns to his chest, paws and rear legs. Carlos Efrain Duarte, 41, strapped fireworks to Indy and lighting them before leaving the badly-burned dog in an alley to die. He was charged with one count of animal cruelty as the only clear evidence was of security video footage of Duarte unloading Indy from the bed of his truck. Duarte pled no contest on one count of felony cruelty to an animal and was sentenced to two years in state prison. He was taken into custody on September 30, 2014, but because of overpopulation, served ONLY 3 DAYS.

Georgia: May 21, 2015 -- A young female pit bull mix was found dead, hanging on a chain off of a bridge on Kelly Lake Road in Dekalb County, GA. She was discovered by a mother walking her son from a nearby elementary school. Animal cruelty detectives believe it was intentionally thrown over the side of the bridge. A local organization, Stubby's Heroes, spearheaded the campaign to find the killer(s) by raising $10,000 and awareness through news media. Despite the reward, nobody has come forward. Advocates believe the community is afraid of retaliation from the killer(s).

South Carolina: May 27, 2015 -- Caitlyn, a 15-month-old dog found with her muzzle taped shut in North Charleston, SC. Police arrested William Leonard Dodson and charged him with ill treatment of animals and torture. At the time of his arrest, Dodson was on probation for a weapons conviction and out of jail on bail on a more recent drug and gun charge. According to court records, the convicted violent felon purchased Caitlyn two days earlier and taped her muzzle because she barked too much. He told the previous owner about it and laughed.

Then there are those committed by young offenders. There is the case of the bleached pups by an 8-year-old in Fond Du Lac, WI, because the puppies were biting the boy's foot; or "Honor" was caught on video being tossed and body-slammed by laughing teens in St. Louis, or "Miracle" who was thrown off the bridge by an 18-year old just outside of Boswell, KY... all of these happened just in the first quarter of 2014.

A kid hurting an animal is not a "phase" and it's no laughing matter. 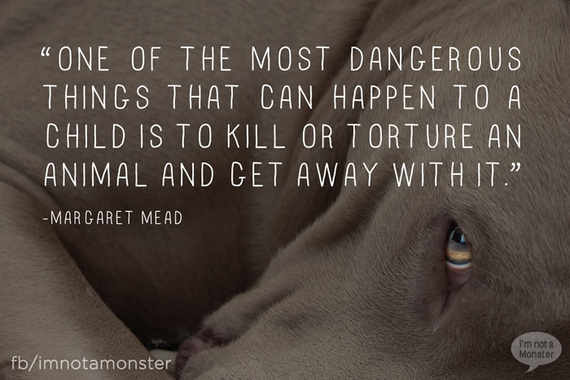 All the cases above are just a small percentage that are getting nationwide attention because there are advocates and animal lovers who rallied behind these victims. Countless other victims aren't so lucky because they were abused behind walls, in remote locations, or because those who knew did not speak up.

You may notice that all the victims above are pit bulls. Although pit bulls are not the only dogs being hurt, according to The Humane Society of United States, they are the most common victims of animal cruelty. And this unfortunate trend is rising at an alarming rate.

One thing for sure: this is not a pit bull problem. Even if you don't like pit bulls, you should care because this is a community problem; because the next thing these violent criminals hurt could be your loved ones. Just like Aiden Howard, who was sitting on the couch watching cartoons when Juan Daniels took his life.

The next victim could be you.