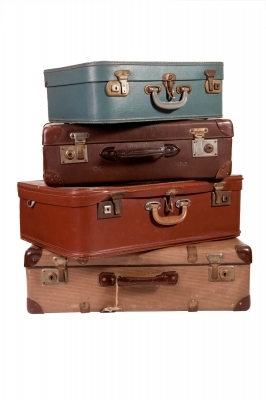 When you find out a guy has been married before, do you hit the brakes? Worry that he may have too much... baggage? I tell you what: You should be far more afraid of the dudes with zero baggage. I personally have never trusted someone who travels a little too light.

You want a real grown-up man? Date a divorced guy. They know two things: What it's like to love and what it's like to lose. Two very critical lessons. And if he has kids? Great. Even better. He has learned that there is something more important than him. He knows what it is to be humbled by love, and to put other people first.

(On the run? Listen to this story read to you.)

One of the most serious boyfriends of my adult life was divorced, or divorcing (he'd been separated a year). I hadn't dated anyone in that situation prior, and I found it refreshing to date a grown man with commitments and obligations.

When you date a much younger man (which I have many times), you realize what's missing — they're all hope, no miles. But when I started dating this divorced man in his late 30s, I thought he was sexy and sturdy in ways that younger men simply weren't. He knew what it was to make decisions, and have them blow up in his face. He learned how, despite your best efforts, things sometimes fall apart in your hands and break your heart. His biggest disappointment wasn't, say, that he didn't get into his first-choice school.

I'm not saying that divorced men are better than single men — but I'm saying that if you write off a dude because he loved someone before, you're being shortsighted. Perhaps very. This weird idea that we have to be someone's first love, that he or she can't have had any life before us, is naive and crazy and, I'll say it, selfish. Someone's ex, or exes, their kids, all of it is not just baggage they carry around — it's called life. And I want a man with a little on him. Don't you?

In the end, this man and I were not a match; we ended up wanting different things. When he was fresh off his divorce he warned that he wasn't about to get back in that situation again. I was like, No problem. Yet as it turns out, he was the one who eventually wanted that coupled, married life back — and I couldn't blame him. I knew he needed that, but I also knew it wasn't me.

But it had zero to do with the fact that he had been married before. Not one iota.

I say this because looking for partners or lovers or any rich and rewarding connection is NOT like picking out a shirt. You're not looking for the one that looks like it hasn't ever been touched. In fact, quite the opposite.

And by the way, you don't have to have been married to have baggage. There's not one person you could meet right now who hasn't been hurt before. Who hasn't been let down, left to cry his or her eyes out. Or had to make the tough decision to leave. These decisions are what give us character. It's how we learn anything worth knowing.

As someone who hasn't been married or been in a decades-long relationship, I worry about the opposite judgment — that someone will think I'm not capable of sustainable love or long-term connection. And people have as much as told me that. One woman who didn't even know me said, "Oh, you're single — you mean divorced?" No, I mean single. "What? What's wrong? What happened to you?" I know that nothing's wrong with me — but you can see by her knee-jerk reaction that she, and many like her, aren't so sure.

(As an aside, I do think there's something more than a little messed up when it's more acceptable in our culture to essentially make a very big promise and break it, than to decide not to take it on.)

If we're going to look at the upside of divorce, it's that thousands of men and women are released back into the dating pool every day — many of them with a far more open-minded and enthusiastic approach to meeting new people than some of the hardened singles you encounter. It's true. You want to feel like hot stuff? Date a man who's fresh out of a sex-free 10-year marriage. Trust me on this one.

So don't get scared off by baggage. Embrace it. I'd be far more leery of the person who's got nothing — no carry-on luggage, no past, no prior commitments, no lessons learned, just a toothbrush, a change of clothes, arms swinging free. Not only is this a near impossible find, but I'm not so sure you'd want him if you found him.