It took you two hours to get the kids to sleep.

There were glasses of water fetched, imaginary flies pretend swatted, three stories read and everyone was tucked in -- begrudgingly. But not for long. Because then there was the crying and screaming (you) and the ultimatums (them). The bribes. Empty threats were made and finally, they collapsed -- all their ploys exhausted, to rest up for another day of killing you slowly.

It's kind of a suck job, this whole "being a mom" business, but this is your suck job and you may as well not complain. So you were just looking forward to an hour or two of wallowing in quiet self-pity and ice cream, perhaps curled up with a book or even an episode of The Bachelor.

You thud down the stairs in your too small pajama pants, your t-shirt has spatters of paint and reads "5K Fun Run 2006." You can't recall how you acquired this shirt but you sure as hell know you have never ran a 5k and if you had, it would not ever be classified, in your opinion, as something a person should do for fun.

As you traipse around the corner to the kitchen you think you hear the faint sound of the stereo playing in the family room. You grab the Ben and Jerry's from the freezer, slam the door shut with your rear end and grab a spoon. You are sitting cross legged, contemplatively at the kitchen table, fitness magazine (fuck you, irony) spread out in front of you when you realize that there is music playing.

And that it is definitely coming from the family room, where, it seems, someone has turned off the overhead lights.

You can barely make out the flicker of candlelight from the shadows around the corner and you wondering if you should go and investigate (a seance?) when you hear the soft strains of melodic sex oozing from the record player.

Your spoon stops in mid air.

You consider a retreat back upstairs, a fake sleep at the table. You wish for narcolepsy, amnesia. Anything.

But it is too late. He is already sauntering around the corner, wearing only his jeans and white undershirt.

He is holding two wine glasses.

He has spotted you and he is smiling.

You want to turn around and see if perhaps there is someone behind you to which he is actually speaking. But then he winks. At you.

And he speaks again, reaching out for your hand and peering at you in what you imagine he imagines to be seductive allure.

He gestures with his hands up and down his middle-aged, dad-sized frame.

It's a struggle that must go back to the dawn of time.

Perhaps even back to those prehistoric cave dwelling couples in the Stone Age. She gathered the berries and hauled water and nursed Neanderthal Junior all day long. Neanderthal Man was busy hunting bison with blunt sticks.

He should have been exhausted. She was exhausted. But as soon as the baby was sleeping in his stone bassinet, here came her husband -- hunching and smoldering, grunting the modern equivalent of "let's get it on."

All she wanted was to sit quietly, maybe bone up on some of the cave wall hieroglyphics. But her Neanderthal husband had a different plan. He wanted to bone her.

What's a Neanderthal wife to do?

What's any wife to do?

What will YOU do?

I know this is novel, but brace yourself.

Why not go for it?

Before you even begin (put your hand down) I know you have a million reasons why not. I'll list a few here:

But let's agree to let the Why Not's rest for awhile.

You can always say no.

You are practiced in saying no.

No means no and should always be respected.

Yes, yes. Always yes to all of the above.

But let's just take it down a notch there and explore what might happen, if this time (brace yourself) you said yes.

1) You would burn calories.

According to Men's Health, the average man burns 100 calories and the average woman burns 69 (hee hee) calories during the typical roll in the hay. Okay, so maybe you aren't burning as much as if, say, you were sprinting a (not at all fun) Fun Run, but still far more than you would burn shoveling in the Ben and Jerry's.

2) You would be happier.

Making whoopee makes you giddy, psychologically. WebMD cites a study that surveyed the sexual activity and happiness of 16,000 men and women and found that sex "enters so strongly (and) positively in happiness equations" that they estimate increasing intercourse from once a month to once a week is equivalent to the amount of happiness generated by getting an additional $50,000 in income for the average American." You might not be trading in the minivan for the car of your dreams this year, but you can still take the Mustang out for a ride if you know what I mean.

3) You would be healthier.

Listen, girl. You're a mess. You have no time for anything healthy -- sure, you wolf down your daughter's Flintstones vitamins and you floss the week before you go to the dentist. But a little "gland to gland combat" is just about as good as any other move toward a healthier you.

It has been proven to boost your libido, make you sleep more soundly, reduce your risk of heart attack and strengthen your pelvic floor muscles.

Unless your pelvic floor muscles are already super. Which, in that case, disqualifies you from even reading this blog post. I almost called this post "Need kegels, will travel."

4) You will feel more connected.

There's probably a lot of science to back this one up, but let's keep this more simple. Every woman I know says that while she might have a million reasons she didn't have the energy to start having sex, she's usually glad she did it anyway. Because afterward, you just... like each other. Of course you always love each other. Even when you say no. Even when he isn't interested (isn't he always interested?).

Even when you are too tired. And even when you haven't had sex since before the baby, unless you count that one time at his parents house when you told him you would do it if you didn't have to take off any articles of clothing and didn't have to move at all.

That guy, he's pretty okay, isn't he? He doesn't care that your pelvic floor is as weak as a busted up hammock. He thinks you're beautiful. And he wants to do the horizontal hokey pokey RIGHT NOW.

And he wants only you.

Sometimes you just can't muster the energy and sometimes you will say no. And that's okay. Take the guilt and throw it out with the empty Ben and Jerry's pint. But take the long list of Why Not's and toss those out too. The whole thing needs to be redetermined and reconsidered.

If you wait for that small interval in which you have had enough sleep and feel enough energy and have enough time and you really really really want to... well, that time might never come.

So I'm here to say this: sometimes it's okay to fake it until you make it.

(Except don't fake IT. Make him work for that shit.)

You take the wine glasses from his hand and tell him that if he promises to never, ever wink again you will give it a go. And he wants to dance with you.

And the bedroom leads to bow-chick-bow-bow.

And once you are in your bed -- your legs layered in post coital bliss, you are still tired but you are glad.

He touches his nose to your nose and smiles so closely you remind yourself to tell him tomorrow to trim his nostril hair.

But boy, is he handsome. And he looks at you so happily.

You are glad you ignored the Why Not's this time.

You are just about to drift off into sleep when the bedroom door is flung open. The tell tale sound of child sized footstep approach the bed and you brace yourself for what comes next.

"Mama. I'm FIRSTY," says your son as he pokes you in the neck.

You don't even move or open your eyes as you speak.

"Honey?" You say sweetly to your husband.

And then you drift quietly into a long and restful slumber. 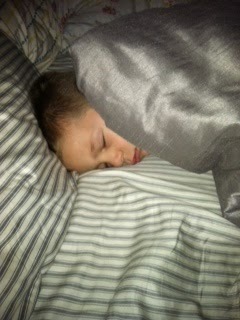