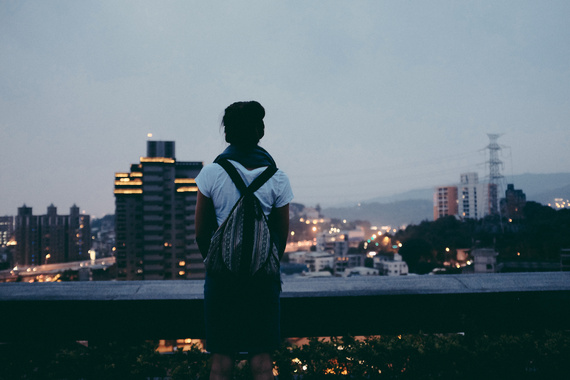 Living in another country is like a dream to some people. They're envious of the idea of someone who's off exploring faraway places instead of living a normal, seemingly less exciting life. When I've spoken with people who haven't lived abroad, they have this notion that it's something reserved for these spontaneous nomad-type people, that there's this unattainable spark about us adventurers living our dreams.

I think that people wrongfully confuse living in another country with touring it. Being a tourist is like highlighting the best things you could be doing in a particular place and enjoying every moment because you've been anticipating this trip for months. You request a few weeks off from your job or quit altogether -- so your obligations include nothing more than trains to catch and hostels to book. You put countdowns in your Facebook status and take photos of your passport as you wait to board the plane. You tick off your bucket list one by one, and you head back home with anecdotes from the museums you went to and the street food you tried.

But being a tourist and living are vastly different, and the value of living abroad is too often overlooked.

I lived in Mexico for six months. Some people I'd told imagined it was all beaches and tequila, hot weather and sombreros, while few others expressed a more violent imagination of what it would be like. But it wasn't either. The perceptions most people had of what it was like to live there were very wrong. Even I didn't know what to expect.

From my comfortable Toronto apartment I moved to Chihuahua, a desert city of a million in the north of Mexico. I moved there to work, so my intention was to live there like I did at home. I paid bills, I did groceries, I made my bed, I took out the garbage. I went to the gym and to parties, I watched Netflix and cooked dinner. I traveled to various cities, too, so I was even a tourist while living there.

But people don't think about any of this when you tell them you lived in another country. They have only these superficial ideas of palm trees and cheap beer, or street gangs and ramshackle houses -- a view that they're unable to look past. It's a sort of ignorance that's understandable, but it's one that they've chosen not to correct.

Let me tell you -- it's worth correcting.

Actually living in another country reminds you how incredible life is. Though you get used to a new routine and enjoy a new comfort, something about it gives you an appreciation for everything -- things that you wouldn't usually notice or pay attention to.

You're reminded that time is fleeting, that your experiences are what you make of them, and that you're such a tiny piece in this big beautiful world. Your new normal reminds you how special your home is and your friends are. You realize that the world isn't as different as you expected; that everyone uses Facebook and watches Netflix and listens to Drake.

Living in another country introduces you to challenges you've never experienced before. You're forced to face problems head on -- and to come up with solutions quickly and easily. You become resourceful and pragmatic. You're constantly learning.

Living in another country teaches you to appreciate a new culture -- and not just in passing, where you see only the best of that culture. You get to experience both sides -- the things that you admire and the things that make you wish it were more like "back at home". It makes you understand more about your own culture and what exactly it is about your culture that makes it part of who you are.

I've always traveled. I've planned trips to see the world's wonders and I've thumbed my way through Lonely Planet guides to get around. I've gone places where English isn't spoken and where I'm looked at like an alien; I've eaten food I've never heard of and smelled smells I never imagined could exist. I've been a tourist in many places, even acted "like a local". But none of it compares to what it's like living somewhere that isn't home.

It may not be as glamorous as you imagined, and you might wonder why move somewhere exotic just to end up in that feeling of "normal". But really immersing yourself in another country could be what gives you that spark you envy so much in others.

It's the living that creates that spark. Try it.

Alanna is the co-founder of www.flipdapp.co and editor of the publication Human Output.