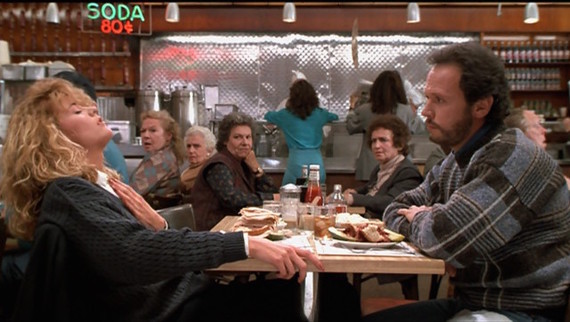 The Problem with Faking
While these are good intentions, no good can come of them. Faking begins a vicious cycle of deceit and miscommunication: your partner thinks they gave you an orgasm with their patented moves, so they keep using those patented moves, thus you feel obliged to keep "responding" to them, until after a year of faking you finally break down and reveal your ruse out of pure exhaustion and boredom, at which point they break up with you because you've humiliated them with your damn lies!

The Reality that Faking Belies
Why insist that sex be so goal oriented? Isn't the journey as important as the destination? Climaxing is no more a prerequisite for great sex than wearing nice lingerie is. And damn it, it's not easy for many women to get to their very own Xanadu. There's no simple formula like there is for most dudes: insert, thrust, repeat. Female genitals are sensitive, and fickle, and picky. And there's no shame in that. You've simply got to work with your partners -- using honest communication, gentle instruction and enthusiastic suggestion -- to teach them its moods. Pretending we live in a simpler world, genitally speaking, will only make things more complicated in bed.

The One Exception to the No Faking Rule
That said, there is one instance when faking is acceptable: on a one-night stand, when you will not see this person again and thus, there is no learning curve. In such a situation, giving yourself the freedom to act orgasmic may make you feel more orgasmic. (Hey, if forcing yourself to smile can make you feel happier...)

This Ain't Just a Lady Thang
Finally, while this is a predominantly female phenomenon, don't think that men can't fake. Oh yes they can... and do! A plethora of factors may contribute to a no-show: stress, depression, intoxication, relationship problems, medication, a thick condom...the list goes on. Add that to the overwhelming pressure of male ejaculatory expectation. Two or three dramatic climactic thrusts, a quick removal of the condom in a darkened room, and you're none the wiser. Put that in your pipe and obsess about the next time you're doing it with a dude.

Have you been a naughty girl?
4 Ways to Admit to Him You've Been Faking