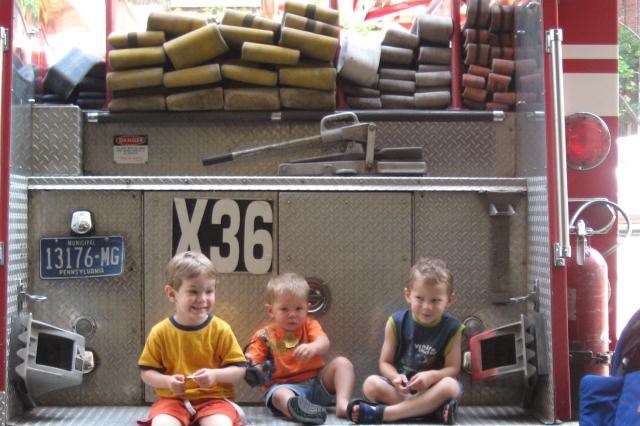 My kids will tell you that my husband and I care more about our dogs than we do about our boys.

This is patently false. Their argument, however, is that we take the dogs to the doctor when they're sick, but the boys... well, not so much. This has more than a grain of truth. You see, we're both (as the boys would say) people-doctors.

We take them to our family doctor for their well child check-ups religiously. When illness strikes, as it must fairly often in a home with four boys born within six years of each other, we do evaluate the situation. If there is a probability that antibiotics will be needed (only three times so far) or any uncertainty about the nature of the problem, then off to Dr. Dan we troop. Most often though (as I'm sure your own doctors have told you), it's viral. We rely on rest, fluids, buckwheat honey for cough, the occasional spoonful of ibuprofen and that great healer, time.

This past week, however, the three-year-old came downstairs one morning, sat on the step to play, and started to cough a new, nasty, croupy cough. Then he stopped breathing. His lips turned blue.

"Get the phone," I said calmly but strongly to my nine-year-old. Then my youngest son turned white and fell unconscious. "Call 911 and tell them your three-year old brother stopped breathing." I laid the little one gently but quickly on the ground and had just put my lips to his when he started breathing again. His color returned.

He opened his eyes in time to see the pretty lights of the fire truck pulled up out front. This perked him up, until he realized the firefighters (God bless them, every one) were coming in to our house. The ambulance wasn't far behind, and neither was my husband who was returning from working an overnight shift in the ER.

Despite what the boys may think, we take ourselves out of the doctoring role when anything serious comes up. We listened to the judgment of our excellent city paramedics and took our little guy to the hospital in an ambulance (which turns out to be not nearly as much fun as he thought). We spent a night in our Children's Hospital, during which the three-year-old played happily and we gradually stopped shaking.

Why take you on this roller coaster with us? For this one single message: practice!

Practice calling 911 with your kids. Run a fire drill. Talk to them about doing exactly what you say in an emergency and not asking questions until after. Plan and think and consider the terrifying, because it could make a life-or-death difference. We got lucky, and so hope to pass that luck along to your family.

As we sat in the ER and I told my husband the story, he said, "I'm so glad I practiced calling 911 with the boys." Wow, me too.