We've visited over 30 countries so far on our two-year around-the-world journey, but one place strikes the heart as the most romantic: Bali. Before we arrived we envisioned the Bali of glossy magazines and travel memoirs like Eat Pray Love; sylvan sandy beaches, lush landscapes and warm water that beckoned in the tropical sun.

But maybe we were imagining a Bali of long ago. We hadn't anticipated the environmental disaster that Bali has become.

The flight from Perth to Bali was full of Australian holiday makers; lured by cut-rate flights to a tropical destination where the booze is cheap and plentiful. Rather than limit the amount of people that can descend on this small island, Bali has expanded Denpasar International Airport to cram even more holiday revelers into the already tight space. 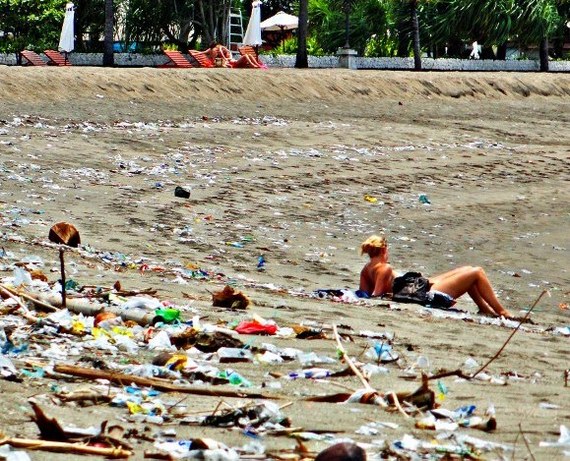 Upon arrival we headed to the famed Kuta Beach for a quick dose of paradise; and that's where the shocking truth of Bali hit us. The beach was littered with so many plastic trash containers that, in some places, they outnumbered the sand. The vibrant detergent, soda and beer containers formed a kaleidoscope of hues that seemed as if they were part of an avant garde art installation. It was not exactly the local color we had come to experience.

Lined by resorts, Kuta Beach is one of the filthiest places we have seen anywhere. We stood there for ten minutes just mesmerized by the amount of trash that could be piled up in a public area. Peering through the rubbish, we saw one lone sunbather stretched out in the sand, determined to soak up some rays despite the mounds of refuse piled up around her. Had she believed the myth of Bali too but was determined to ignore the reality?

The tourism web sites highlight pictures of clean sandy beaches, yet the trash is just below the ridgeline of the sand, invisible in the photos, but quite apparent when one walks a few steps to the beach. The resorts are selling a mirage which the visitor doesn't find out about until it's too late. Kuta Beach fronts the populated parts of Bali but that is no excuse for the piles of trash. 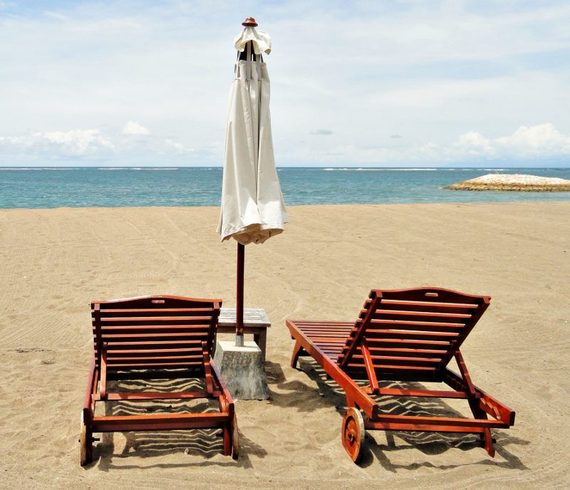 Note: We took the photo of the chairs above right behind the woman lying on the beach among all the trash. You can even see these chairs in the upper left hand corner of that photo. Because of the perspective the trash is hidden, creating the illusion of a sylvan beach.

We visited other beaches on the island and saw the same thing. Where the beach was fronted by a swank resort there was an effort made to keep it clean. But as soon as the resort's property line ended, the adjacent public beach reverted to an open-pit garbage dump. Any hopes of swimming in the sea were dashed by all the trash and god knows what mysterious blobs were floating in the water.

How has it gotten so bad in Bali? The local government conveniently claims the trash washes up from neighboring Java. Even if it did come from there, why is it acceptable to keep garbage on the beach? Shouldn't it be cleaned off? 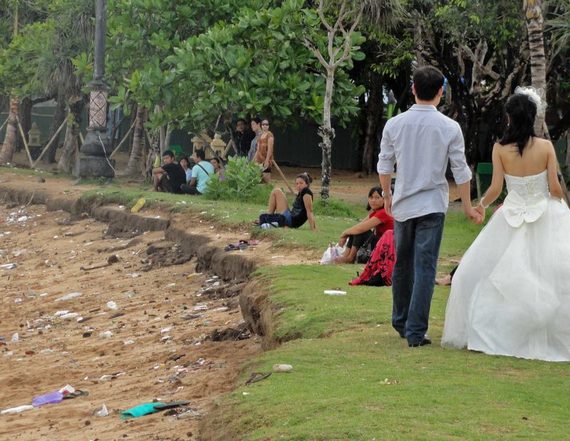 Others told us that the Balinese used to eat their meals off of banana leaves which they would toss aside when they were finished. Since they were biodegradable, it didn't cause a problem, but now they are tossing aside plastic plates which are a problem. During rainy season the plastic washes out to sea and then back on the beach in an endless cycle -- not the type of recycling that Bali needs.

What is Bali doing about this problem? Well they have expanded the airport to handle a greater influx of visitors so they can pile up even more trash that has nowhere to go. One wag on TripAdvisor has referred to Bali as "Eat Pay Leave." Perhaps it's better not to go in the first place. 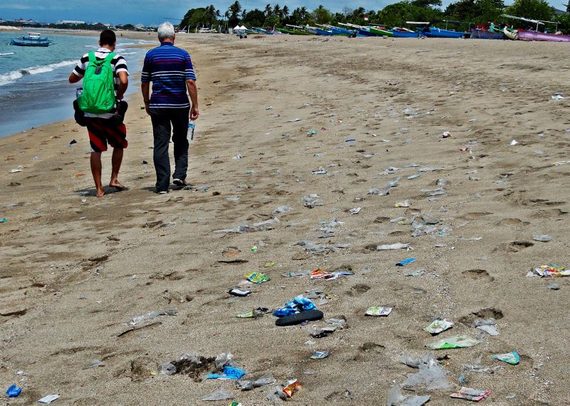 It wasn't fun writing this story, but that happens sometimes when perception and reality collide. The Balinese were the most gracious, friendliest people we met anywhere, but too many visitors are being disappointed by a place that does not live up to its reputation.

In 2011 Larissa and Michael Milne quit their jobs, sold their house and possessions and have been traveling around the world ever since with a Rocky statue. You can follow their journey and pick up valuable travel tips at Changes In Longitude.