"There are no strangers here; Only friends you haven't yet met." 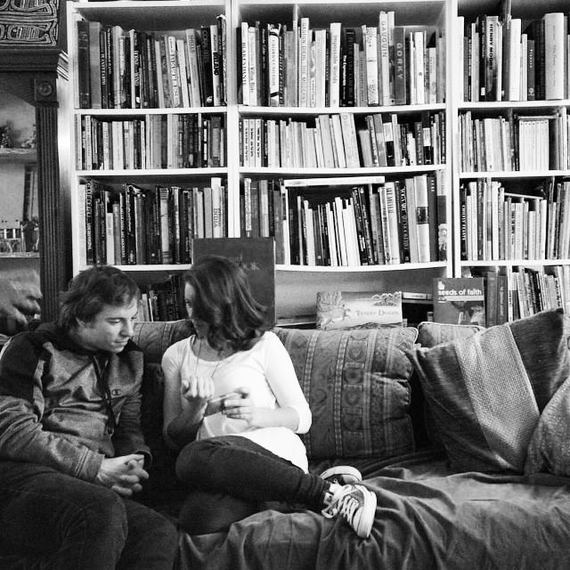 As children we are warned to stay away from strangers. We're taught that strangers are bad and our spongy little brains are filled with warnings and game plans for if and when we ever get approached by one. Overall, I think this is a good idea.

I didn't realize that my fear of strangers had carried over into my adult life until recently.

See, I consider myself primarily an extrovert, a people person. A social, optimistic, open­minded human who also happens to get caught off guard, confused, and maybe a little scared when someone I don't know talks to me in a coffee shop, on the street, or while I'm taking public transportation. What's up with that?

I started questioning all of this the other day while I was waiting for a table at one of my favorite writing spots. I watched as a man, who had spent zero minutes waiting for a table, walked up to a booth and asked the person sitting there if he could join him. The gentleman he approached smiled, said yes, and welcomed this stranger to his table with open arms. I don't know what happened next but I imagine the two men became best friends, sharing stories of love and loss, bonding over their mutual love of espresso, microbreweries, and disdain for people who still use 'LOL.'

As I'm witnessing this friendship sprout in real­time. Still table­-less, and alone I'm thinking to myself, "I could do what that guy did." It's so simple! I wouldn't be alone or without a table. It was an epiphany! It's okay for me to walk up to a stranger and ask if I can sit at their table. I'm not ten years old and this isn't the park or a middle school cafeteria.​ Instead of wasting what could be highly productive time sitting uncomfortably at the counter, trying not to settle in so that I can get to the first booth that opens up, I could just ask someone, a ​stranger, ​if I could sit on the empty side of their booth. Simple as that. While as children it's appropriate to air on the side of caution, I think it may be working against us as adults.

We have the opportunity to foster human connection all of the time but most of us don't take advantage of it. I know that I avoided it for a combination of reasons. One part fear of rejection, another part self-­doubt with a little laziness thrown in there. That all changed though, starting the day I saw those two men sit together.

Every day since I have asked strangers if I could sit with them­ even when other tables have been available. The experience has been overwhelming positive and the benefits are numerous. Not only am I getting a healthy dose of in-­person interaction every day, I'm also boosting my confidence by stepping outside of my comfort zone, and maximizing my productivity by asking for what I want­. In this case a place to work, instead of waiting for it.

Lastly and maybe most importantly, I've noticed a dramatic shift in my attitude. Without realizing it, by opening myself up in one little way, I've adopted a completely different mentality. Previously, I used to take ownership of a table (when I finally got one) by spreading out my work­space and not leaving room for someone to sit with me­ even if they wanted to­.

I now aim to create a warm and welcoming environment so that anyone who is on the fence about sitting with me might feel a little more comfortable and inclined to do so.

Where I used to see a threat I now see an opportunity. The whole time that I thought it was me vs. everyone else, it was really just me vs. myself.