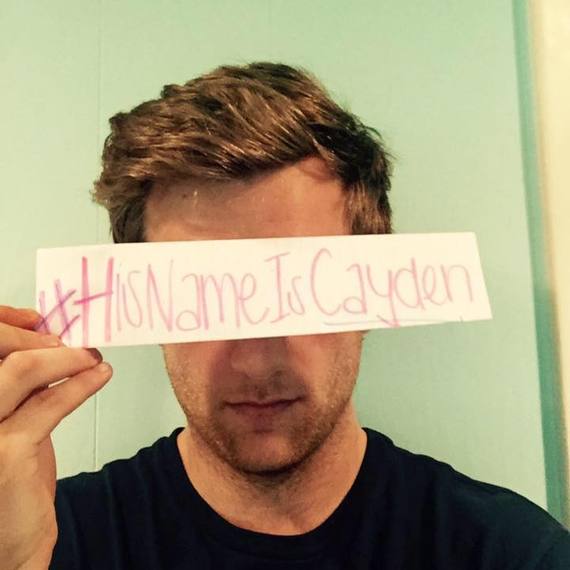 Gerod Roth, aka Geris Hilton, was recently the subject of a media firestorm after a screen shot of his Facebook page went viral. The screen shot was of the comment section on his new profile picture that depicts a young black child standing behind him. 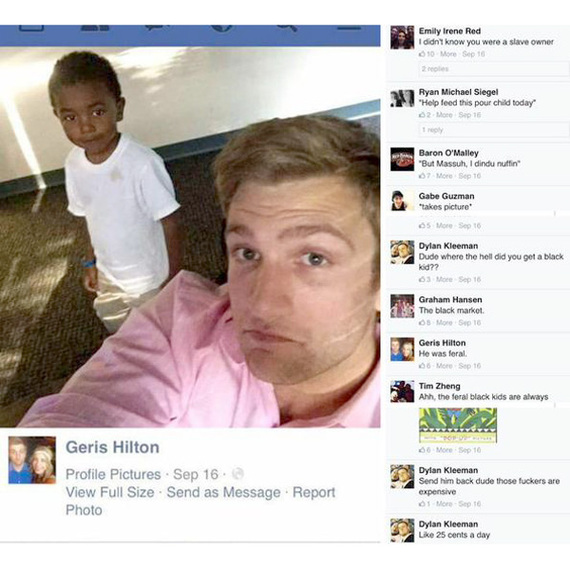 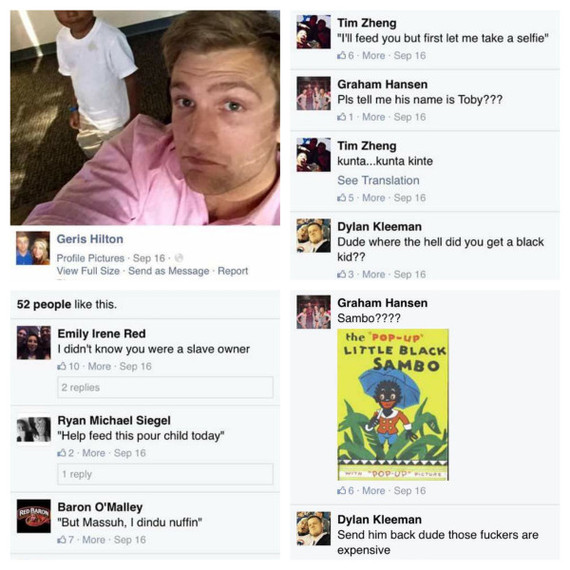 He and his friends left a myriad of insensitive racist comments and ultimately he was relieved of his position at the Polaris Marketing Group. When I heard this news, my instant response was "good riddance". As some of you know, I recently had my own issue with online harassment that ultimately resulted in the person who harassed me online getting fired. While I never wanted my harasser fired, I was glad that he was because it showed that there were repercussions for his actions. Quite frankly, there should be. 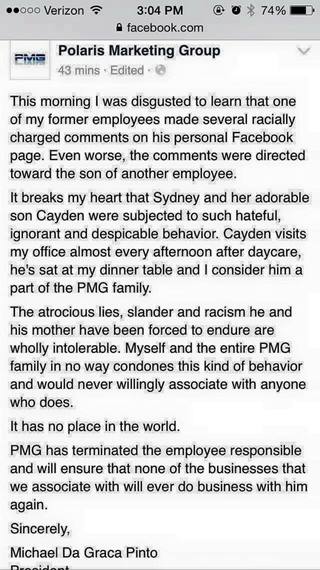 This is the age of information and if you work for a company where you have to interact with the public, you generally sign contracts that tell you what you can and can't put on social media. These companies do not want the actions of their employees to lead to large lawsuits. So on that basis alone, if you violate a contract, it's only reasonable that they relieve you of your duties. This situation, in particular ,struck me because the child is a coworker's son named Cayden. Knowing that, he took this photo, without his mother's consent, uploaded it onto his page and then allowed his friends to say what were pretty distinctly racist comments. This lead to him and some of his friends losing their jobs.

Gerod finally spoke out with Fox 5 News and essentially said that the screen shots were edited and that he never said anything that was racist. He added that he respects and loves Cayden and his mother and would never do anything to attack a child that plays with his own daughter. Now, the interesting thing about this is that there are actually several and several different people on several different devices all have the same screenshots. Yet he wants us to truly believe that he was simply framed for this and that he truly isn't the racist here, his friends are. Here's his apology: 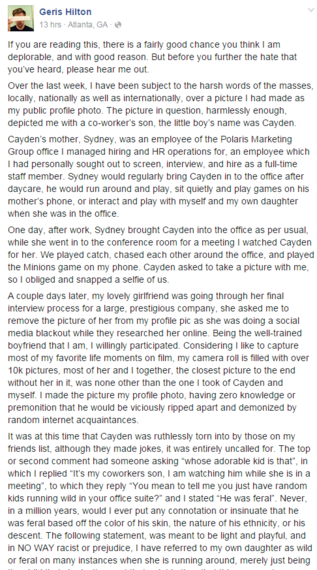 There are several things about this that immensely bother me, but the thing that sticks in my mind is how he utilizes his girlfriend and his daughter, both women of color as a defense against his own, blatant racism. I worry for the environment that child is raised in where she has to hear her white father refer to her as "feral". In other comments, he stated that he often jokes about her "legal status" as well. It may all be fun and games for Gerod, but these are real points of pain for people of color. While his daughter doesn't understand now she will when she gets older. Having several followers who are people of color who were raised by white people, I hear all the time that when you have parents that are white that raise you in that sort of environment, all it does is breed resentment. Furthermore, if you didn't catch the full reference "Sambos" are a blackface caricature that represents Mammy's unkempt and, yes "feral" children. The Sambo places himself in danger because of the Mammy's negligence and is often depicted as "Alligator Meat" in blackface imagery. These things all connect and I refuse to believe that he was simply unaware of that.

Part of me was really willing to take a step back from all of this and say, maybe it really was just his friends. I mean, when you look at the screenshots, he really does only say that line about him being feral. I'm always willing to leave space for the notion that maybe, just maybe the "lefty" media is out of control and found a narrative and ran with it. Maybe Gerod isn't a racist? Maybe it was really his friends who were after all... and that was until my sources sent me the following screen shots. 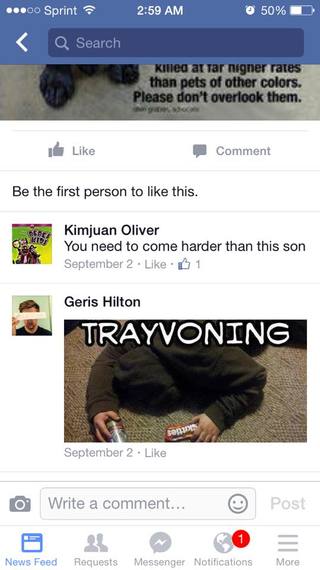 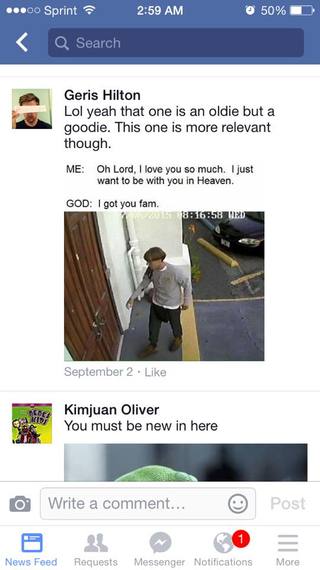 One of the interesting things about having a moderately large platform is that the six degrees of separation opens up so many interesting doors. A follower of mine discovered that they were in the same facebook group as Gerod so they looked up his name to see what he had posted. This is what they were greeted with and wouldn't you know... a racist after all. For those of you who may be confused, the first picture depicts a child holding a bag of skittles and an Iced Tea while wearing a hood, the same things Trayvon Martin was wearing when he was gunned down by George Zimmerman. The second photo is of Dylan Roof entering the AME Church in Charleston, South Carolina where he ended up shooting and killing 9 black people as an attempt to start a race war.

What baffles me about all of this isn't the fact that Gerod is a confirmed racist, but rather that he is so dishonest about it. I wasn't at all surprised when I saw these screenshots. I was certainly starting to give him a smidgen of the benefit of the doubt, but truly, I wasn't surprised. Things like this are honestly all too common. I saw that with my harasser and I see it here. These people operate in what they believe is a type of free-for-all virtual existence where what they say, apparently, shouldn't be taken seriously. Friends report that he is a "racist troll" in his online communities and shouldn't be taken seriously. I think the concept that what you do online should stay online is a cute one that I understand to some degree, but this was a situation where he photographed an innocent child without his mother's consent, posted it online and fed it to people who he knew were racist trolls and on top of that went on to deny it and fabricate lies about how the screen shots were faked. The screenshots I've posted here are very real and, if challenged, can be proven.

I know that there is no logical scenario where Gerod wouldn't try to protect his image and boldly state that he isn't racist just to save face, but I personally would have respected him a lot more if he were completely honest and just said that yeah, he said those things, yes he's guilty of posting the things depicted in these screen shots and yes he is indeed prejudiced against certain people of color. This honestly looks bad for him in so many ways, but if there's one thing I learned from my previous experience is that's these people very rarely are self-aware enough to realize what they're doing and when to stop themselves.

Once again, I think it's so important to recognize that what you do online can impact you offline. Gerod and his friends lost their jobs for what they call "trolling" online. These are people who deal with people of color on a regular basis in professional settings that post racist memes in their spare time. They can claim not to be racist all day long, but the proof is in the pudding. I don't think forgiveness should be given to Gerod Roth until he can fully and honestly acknowledge what he's done wrong and his own hand in racism. Denying it and blatantly lying about it doesn't help. Saying that he's a victim as much as Cayden, doesn't help. #HisNameIsCayden and he didn't deserve this. Gerod, on the other hand, deserves every bit of bad press that's coming to him.

Six Black Politicians You Probably Didn’t Learn About In School