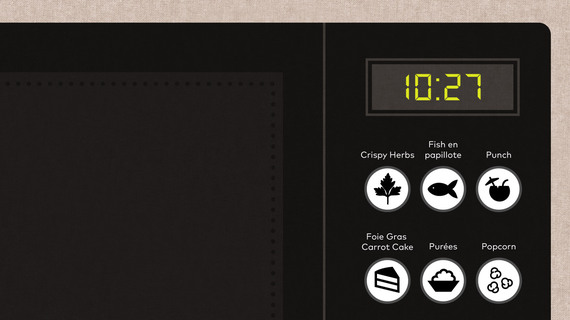 Kanye West Tweeted about his just-released creation The Life of Pablo, saying,: "This is not album of the year. This is album of the life."

And weirdly--stay with me here--the same sort of hype came with a once game-changing, now grudgingly essential kitchen appliance: the microwave.

Formerly known as the Radarange back in the 1960s, the $500 appliance was hailed by its maker (and military defense contractor) Raytheon as "the greatest cooking discovery since fire" in early advertisements.

And surprisingly, some chefs today are in agreement.

"The microwave is the ultimate molecular gastronomy tool. It's underrated," Richard Blais, the chef at Juniper & Ivy in San Diego, bemoans. "It's the food you put in it that's usually subpar, not the poor old microwave."

So which foods does the greatest achievement of Percy Spencer, the original self-taught tech dude and Raytheon's legendary head of power tubes, deserve to send tons of tiny radio waves through? We're glad you asked. Here's how to harness the full potential of your microwave.

① Fry, Fry Again
Skip the vat of hot oil, thermometers and hot oil-related anxiety for this simple way of frying leafy herbs into crackly, crisp submission. Thomas Chen, the chef/owner of Tuome in New York City, brushes a bit of oil onto his herb of choice--maybe a bit of sage for porky maiale al latte--then puts it in the microwave for a few seconds. Bonus: It leaves the shape of the leaves intact, especially thinner, fussier ones like parsley. "Visually, it's more appealing to crisp parsley in the microwave, because it stays flat," Chen says.

② Oleo Atcha, Gurl
Punch for a party in a pinch? Easy, right? Not if you're going the traditional route by swirling a bit of aromatic oleo saccharum, the sugary, citrusy elixir essential to 19th-century cocktails. However, instead of waiting a whole day for the ingredients to meld together, Justin Lavenue whips his up in a mere five minutes at The Roosevelt Room in Austin. "We use a microwave all of the time to make quick oleo saccharums for punches," Lavenue says. "The heat draws out the oils of citrus peels and breaks down the sugar quicker."

③ En Papillote: French for "Just Nuke It"
Yeah, that's a lie, but Tim Meyers, the sous chef at Charlie Bird in New York City, is très, très proud of his fish en papillote hack, aka parchment fish. "I've got no problem admitting I still use mine at home to prepare fish en papillote," Meyers says. "Although the package is being cooked in the oven, you are essentially steaming the fish." The key to pulling this off, though, is constantly checking the fish. "Prepare the fish the same way and pop it in the microwave for a couple minutes at intervals," Meyers explains. "You'll find that the result is an excellent substitute for turning your oven on in August."

④ Let Them Eat Cake
Far better than microwaving raw cookie dough for a rather oily but acceptable snack, the light-as-air sponge cake dreamed up by Ferran Adrià continues to inspire today. At Acadia in Chicago, chef Ryan McCaskey reinvents the molecular gastronomic classic with his foie gras carrot cake. "The spiced cake is shot out of an iSi canister then microwaved for 38 seconds, so you get the lightest, fluffiest cake," McCaskey says. "We then partially dehydrate it for one hour, which gives it a slightly crunchy texture."

⑤ Reheat the Right Stuff
Sure, chefs rely on their microwaves to warm things up. However, exactly what you stick in the microwave is important, according to George Mendes, the chef/owner of Aldea and Lupulo in New York City. "The microwave is especially great for preheating purées, like potatoes or root vegetables, Mendes says. "It beats having to heat the purées in a pot, which almost always begins to stick to the bottom once you turn your eyes or stop continuously mixing with a spoon or spatula."