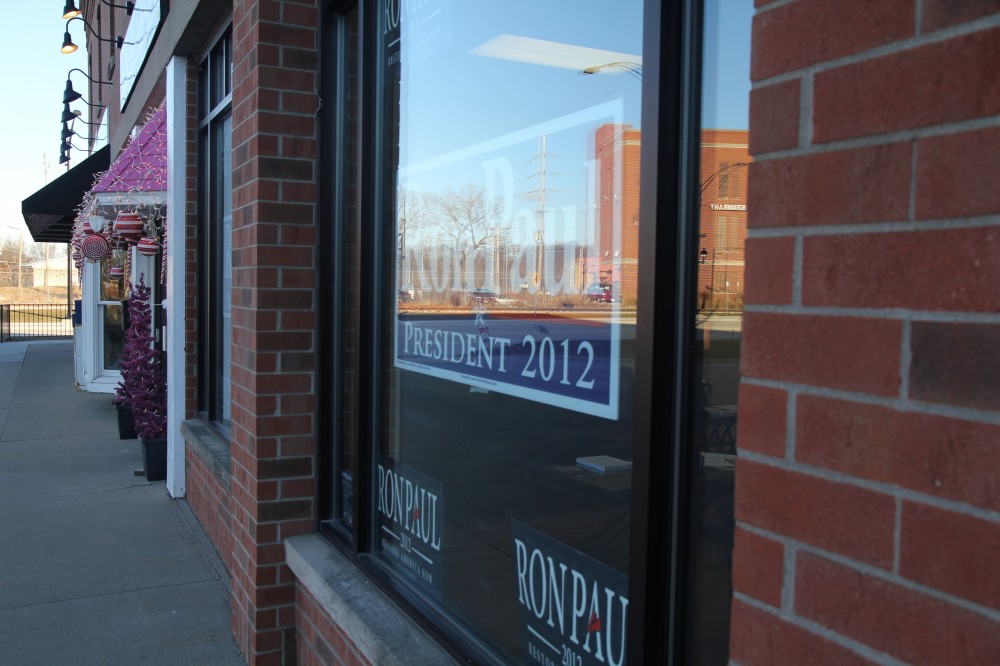 CEDAR RAPIDS, Iowa -- I've lived in Iowa my whole life, and as a senior political science major at Coe College, I understand the importance of being politically active. But the moves made recently by President Obama and Congress, coupled with some of the outrageous statements made by mainstream Republican candidates, have me nervous as the Iowa caucus fast approaches; whom can I vote for? Not a president who believes it is OK to assassinate American citizens overseas, or a president who would repeal all of the progress made to protect the environment and the rights of gays. Third party?  Or just don't vote - a show of no confidence, like the Occupy Movement was doing?  Then I realized there was a third option.

I worried about breaking the news to my friend Reid, a hard core liberal.

"Don't be mad at me," I told him, "but I'm afraid I have to vote Republican this coming election."

"Me too," said Reid. "I'm sure not voting for Obama -- I'm voting Ron Paul."  My jaw dropped. Reid said that although he voted for the Green Party candidate in 2008, he has followed the Texas Congressman for years. He was the only candidate he felt hadn't lied to us and has the voting record to prove it.  "And I'm sorry, I don't want to be declared a terrorist and 'disappear' in the middle of the night," Reid said.

Reid and I had been involved in the Occupy Cedar Rapids movement together, me silently documenting, him actively participating. I knew he was angry about Obama's new budget plan. I just never expected him to lean Republican.

Reid demonstrates what John Della Volpe, the director of polling at Harvard's Institute for Politics, told Turnstyle about our generation. This election season, the so-called 18 - 29 year-old Millennials are up for grabs, and Ron Paul has all the right moves. We might align with liberal ideas on paper, but in Iowa, the earliest state in the nation to caucus for presidential candidates, it's Ron Paul who will get young voters out of the house to caucus in sub-freezing weather.

"There is a chord clearly that Ron Paul is striking with young people," said Volpe. "It's just his incredible authenticity, and a focus on this libertarian, independent streak that young people have always had. And he's also putting an effort behind it."

Professor Dianne Bystrom at Iowa State University witnessed the energy for Ron Paul first-hand. She teaches a Campaign Rhetoric class every four years to coincide with the presidential elections. On December 8, she attended a Ron Paul event on campus with over 1,000 attendees. "It started at 7 o'clock, but people were standing in line at 6, almost like a rock concert," Bystrom said. "It was a pretty raucous crowd because they were packed in. Afterwards students were waiting in line to take pictures with him."

Sarah Banowetz, 29, is astonished by the way Ron Paul has captured the attention of her 20-year-old brother. "He doesn't care about anything, but he's totally all for Ron Paul," said Banowetz. "Whether Ron Paul wins or not, it's been really cool to watch my brother learn about stuff and really take an interest."

So why do Millennials go for Ron Paul? Bystrom said it could be the 76-year-old's grandfatherly age and appearance. But it's also his politics.

My father and I have never agreed when it comes to politics.  According to him, I've been brainwashed by my liberal arts education; and I think he's stuck in the politics of a time long passed.  I mean, I'm the political science student, right? Shouldn't I know what's going on in the world today?

I remember being thrilled in 2008 when I attended the Democratic caucus despite the fact that my parents were attending the Republican one; I found I had a lot of friends in the same situation. Now, in 2012, we may be voting in the same place. I can't help but groan - times are changing.

And change is exactly what people my age are looking for.

Turnstyle spoke with Angel Williams, 25, who went looking for change at a Ron Paul rally. After the event, she no longer had any reservations about voting for him. Meanwhile, she had nothing but reservations for Obama, her 2008 choice. His presidency, "just wasn't what I expected."

Paul represents dramatic change for young people, according to both Volpe and Bystrom. The first thing many young people see is an anti-war candidate. "For many young voters, the war in Iraq has been going on for most of their lifetime," Bystrom said. "While older Republicans are wary of Ron Paul's isolationist policies, they appeal to young voters."

"At first the foreign policy caught me like everyone else," said 18-year-old Ian Hollinger, "But to be honest, when you hear him speak, I don't have any more reservations." Hollinger, a student at Kirkwood Community College in Iowa City, said he also talks a lot about Paul's economic policy when he volunteers for the campaign. "The whole idea that you don't need to spend trillions of dollars to run a government really appeals to me," he said.

But the students at Iowa's 64 colleges and universities are still on winter vacation. Will they show up to caucus for Paul?

Paul might also be underestimated due to the fact that the Iowa Poll by the Des Moines Register, surveyed a pool that was 69 percent men and 31 percent women. According to Bystrom, women attend caucuses in larger proportions than men do--and are big Ron Paul supporters. "He's the only candidate with a big gender gap," said Bystrom.

The question is: do young people and women give Ron Paul the edge he needs to win in Iowa? And if he does win, could the momentum carry over to the rest of the country?

Here in Iowa, we are proud to hold the first caucus -- proud to help decide which candidate has a chance at winning the presidency.  I mean, what else do we have to be proud of except cornfields as far as the eye can see?  Yet even here, my experiences show that this year a lot of young people are indifferent; otherwise, they're supporting Paul.

GOP members have said that if Ron Paul wins the Iowa caucus, and loses the party nomination, the Iowa caucuses may lose their legitimacy -- especially if many who caucused for Ron Paul end up voting Democratic in the general election.

And according to Della Volpe's Harvard poll, Millennials nationwide would still vote for Obama over a Republican candidate. But at least among my friends, change from the status quo is essential, and it's no longer under Obama's banner. If Paul doesn't get the Republican nomination, many of us will either take our vote to another party or not vote at all.

Della Volpe told Turnstyle, "I think it's a tremendous mistake for members of the Democratic party to take young people for granted. There's nothing to believe that young people won't continue to show this independent streak and continue to think and evaluate and question the role of party and the effect that they have on selecting candidates."

After all, we're still up for grabs. I'm realizing Ron Paul is the only candidate I could accept; none of the others represent me.  So what do I do if he doesn't win the nomination?  I feel like many of my friends, and people in my generation, are asking the same question.  Party politics don't matter to us; we want a candidate that will represent us and will act in our interest.  If not Ron Paul, then who?

Robyn Gee contributed reporting and editing to this story.