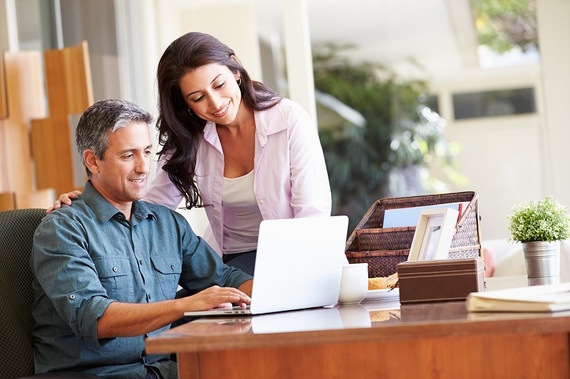 Homeownership often is considered an important part of the American dream. But a home -- the mortgage, in particular -- is also the biggest expense for most households. As a result, homeownership can make another aspect of the American Dream -- a comfortable retirement -- hard to achieve.

High housing costs force about one-third of adults 50 and older to pay more than 30 percent of their income for homes, forcing them to cut back on essentials and retirement savings, according to a report by the Harvard Joint Center for Housing Studies and AARP Foundation. And homeowners with mortgages are more likely to work longer and retire later than those whose mortgages are paid off, according to Boston College's Center for Retirement Research.

In short, your home could be hindering your ability to retire. That's why downsizing to a smaller, less-expensive house well before retirement can make sense. Don't wait until your 50s or 60s -- make the move in your 40s, said Richard Arzaga, a certified financial planner and CEO of Cornerstone Wealth Management in San Ramon, Calif. "If the goal is stronger financial position when you get into your older years and retirement, the sooner you downsize, the better position you'll be in," he said.

Benefits of Downsizing in Your 40s

In your 40s, you might be thinking more about expanding your current house or moving to a bigger one if you still have children living at home. Each kid wants his or her own room, plus you want a big bonus room where they can hang out with their friends and more room so you can entertain guests, right? Downsizing is the last thing on your mind.

When people typically start thinking more seriously in their 50s about what they need to do to be able to retire and start considering downsizing as an option, however, they're really not giving themselves much time to reap the benefits of moving to a less-expensive home or renting, Arzaga said. The reason 40 is better than 50 is you have another 10 years to boost retirement contributions with the savings from downsizing and more time for your investments to grow, he said.

If you downsize from a $250,000 house to a house that costs $150,000, for example, and factor out the costs of selling and moving (10 percent of the selling price), you'll have $75,000 that can be added to savings, according to the Center for Retirement Research's Using Your House for Income in Retirement report. If you make this move in retirement, you can increase your yearly income in retirement by $3,000 if you withdraw 4 percent of the $75,000 annually, according to the CRR's calculations.

If you downsize in your 40s, however, and invest that $75,000 in a portfolio with a mix of stocks and bonds with a 6.5 percent annual rate of return, it could grow to nearly $250,000 over 20 years. Downsizing in your 40s and investing the difference in house prices can significantly boost your retirement savings and the amount you can withdraw in retirement, said Steven Sass, an economist with the CRR and one of the authors of the report.

Calculating How Much You Can Save by Downsizing

If you did the math, Arzaga said, you'd find that the benefit would be even bigger if you downsized before 40 or avoided homeownership and just rented. But many people are just starting families and buying homes in their 30s. And he recognizes that you can't take away the need people have for homeownership. "It goes against the dream of what people feel they should do," he said. That's why it's more realistic to consider downsizing in your 40s than an even earlier age.

Related: What to Do When Your Job Offers an Awful Retirement Plan

If you're looking to improve your financial position and you have too much house, downsizing is a great option, Sass said. This could apply to people who started their family at a young age and whose kids are no longer living at home. It could even apply to people with children still at home who stretched the limits of their budget to buy a large home with a mortgage that's unmanageable or expenses -- such as utilities and maintenance -- that are more than anticipated.

If you have little to no savings and know retirement will be a stretch, downsizing might be essential, Arzaga said.

It also can be a good option for people who are willing to sacrifice some space for a smaller home or rental unit closer to recreational activities they enjoy or their workplace, Sass said. You just want to make sure you move into a house that will suit your needs as you age, such as one that's a single floor or has a master bedroom on the first floor. Because Sass said moving gets harder physically and emotionally as you age, downsizing in your 40s can make the transition a little easier by taking advantage of your younger age to make a move that you know you'll eventually need to make.

Read: How to Retire When Your Partner Can't

Clearly, there are financial benefits to spending less on housing so you can boost retirement savings. But downsizing might not make sense or be necessary for everyone.

If you have the financial resources to own a larger home and save enough for a comfortable retirement, you don't need to rush into downsizing before you retire, Arzaga said. It also can be a bad move to downsize if you have an aging parent who might need to move in with you -- or already is living with you and paying you rent to help offset housing costs, he said. If you have young children in public schools, you also have to take that into consideration if a move to a less-expensive home would force them into a different school.

This article originally appeared on GOBankingRates.com: Why Your 40s Are a Good Time to Downsize Your Home