Women account for just over half of automotive buys and play a big role when the family chooses a car. So, auto industry outsiders wonder why women continue to receive discouraging treatment in many showrooms. In a recent article, marketing expert Maddy Dychtwald shared one woman's encounter with a dealer who paid attention exclusively to her husband as the couple shopped: when challenged, he denied ignoring her until she forced him to admit he had forgotten her name.

Despite gradual but meaningful gains in other industries, women still represent just 5 percent of dealers, an oft-cited reason for what seems like very old-fashioned sexism in the showroom. But dealers who seem to prefer to sell cars to men may be operating less with outmoded, biased emotionality than with modern, profit-seeking rationality. After all, in a rough sales environment, which customer would he rather have? The one who buys on impulse and buys a new car more often? Or the one who ponders her purchase and holds onto her vehicle longer?

Our interviews with buyers and salespeople show that men, though on the whole more knowledgeable about cars--how they work, who makes what model, how a vehicle was rated by Road and Track--tend to be less rational about their car purchases than are women. They are more likely to carry into adulthood an unshakable desire for their childhood "dream car". The difficulty of getting his kids in and out of car seats can be overlooked in the showroom by a man clutching the wheel of the gleaming coupe he started to lust after when his teen brain first envisioned the varied uses of a back seat. 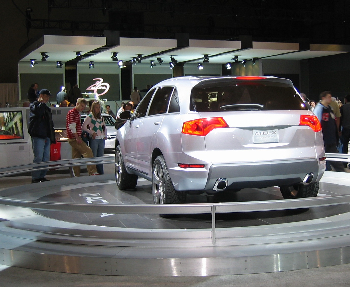 Claire, a product specialist who tours auto shows for one of the Asian automakers, told us that men are remarkably impractical in their purchases, and a recent study by market research firm CNW confirms her view. Men put "styling" on the top of the list of attributes they find critical in a car while women ranked it 11th. Women placed items like "visibility from the driver's seat to both the front and rear" high on their list. (In other words, men cared about what other people would see when they were driving; the women cared about whether or not they could see when they were driving.)

Unlike women, who approach her with a set of questions, men tend to recite data to Claire about her company's cars, flaunting their knowledge instead of testing it or building on it. Women also have a greater focus on cost, using dealer incentives like rebates to reduce overall price. Men generally use them to buy a more expensive car.

So, it makes all the sense in the world that a dealer would rather banter about the power of a V8 engine with a male customer whose eyes are bigger than his wallet than handle a frugal female who might pepper him with queries about safety and reliability. Chances are he makes a quicker sale and a fatter margin pitching the man.

A recent study indicated that as speedily as men fall in love with a vehicle and buy it, they fall out of love once they've brought it home. It takes just four months for the average American male to grow bored with his car and start coveting advertised new models. Women, on the other hand, bask in the pleasure of their new purchases more than three times as long. Although the attention spans of both genders seem darn short, dealers obviously prefer the flea's length of men's.

Prior to the recession, annual new car sales grew to a bloated 17 million as Americans were lured in by new models. But with unemployment and insecurity still high, the industry has to work harder to convince us that we need a new car. And men are more easily convinced.

So, dealer sexism may be more method than madness--a woman entering a showroom with tough questions and a hard budget in hand may exit deflated and ready to send her husband in alone next time. While this kind of misbehavior can backfire on dealers, the automakers are taking a subtler and more palatable tack--working to make women resemble men by turning them into more emotional buyers.

As the auto industry looks to female consumers to help pull itself out of the recession, women should take care not succumb to the emotional and image-based appeals that they have been more immune to than have their fathers, brothers, and husbands. Overspending on cars was an important component of the financial crisis that got us all into this swamp. We should all drive out of it having become more, not less practical.

Catherine Lutz, an anthropologist at the Watson Institute at Brown University, and Anne Lutz Fernandez, a former marketer and banker, are the authors of Carjacked: The Culture of the Automobile and its Effect on our Lives (Palgrave Macmillan).

Carjacked: The Culture of the Automobile and Its Effect on Our Lives
by Catherine Lutz, Anne Lutz Fernandez