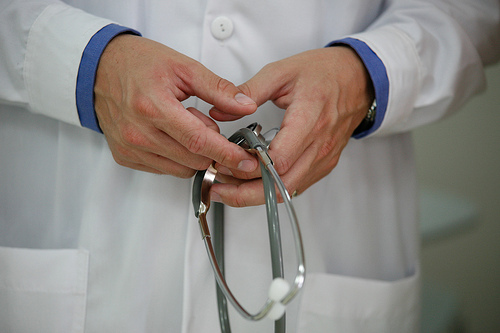 Before we get off on the wrong foot, let's clarify what kind of doctor I'm talking about. That doctor is a primary doctor or low-level specialist, brain surgeons are not included in this discussion.

Now that we've got that straight, you probably want to know why I would make such a seemingly silly statement?

The basic thesis of this hypothesis is that seeing your primary doctor throughout the year is like getting the oil changed in your car.

In other words, it's not, or SHOULD not be a major financial burden to pay for such a service.

A fairly accepted economic principle is that you are worth what people will pay you. That's not to be confused with what you charge them. You might be charging someone for something, but they might be willing to pay you much more for it.

This concept is set on fire, put in a box, tossed down a canyon and run over by steam roller within the healthcare industry.

In fact, when (way back in 1922) doctors and hospitals started to realize people would have a problem paying for their services, at the rates they wanted to charge, the hospitals created the insurance program Blue Cross and the doctors created Blue Shield.

They merged to form Blue Cross and Blue Shield in 1982.

What if there was no such thing as "health insurance"? What do you think doctors or even hospitals for that matter would charge knowing you were the only one who would pay the bill?

I promise it would be less than what they're charging right now. In fact, I can prove it to you -- more on that in a second though.

Of course, you can play the "what's it cost to save a life" card, and it's a card I think has some value, however at the end of the day there are plenty of other people in the lifesaving business that don't get the same pass.

The problem is, because health insurance is so expensive, we want it to cover everything and because it covers everything we want to use it as much as we can.

The truth is health insurance was never intended for what should be small-time, nickel-and-diming. Health insurance is supposed to help pay for the things you would never be able to afford on your own, like brain surgery or an open heart procedure, not to get an antibiotic for a sinus infection.

I want to introduce you to Dr. Robert Lamberts, he doesn't accept any health insurance of any kind, government or private.

Instead, he has priced his services in a way that is affordable and manageable for people to pay, on their own, through a monthly subscription of sorts.

He actually has a pricing page where he breaks down the monthly cost by age. It's so awesome I don't want to take the chance of you not clicking to see it.

*Students who live out of town: $10/Month
There is a $150 Family Maximum to the monthly fee

Before you say it, no I have no affiliation to Dr. Lamberts, he lives 660 miles away from me in Augusta, GA and I've actually never communicated in anyway with him. He might have ignored a tweet from me once.

While we're at it, take a look at the type of care and service he is providing for that insanely low monthly subscription.

Tell me almost every one of those items isn't on your current wish list for your doctor?
If you needed any more proof in this type of system, when have you ever received anything even close to this from your doctor?

By his own admission, in a previous Huffington Post article, Dr. Lamberts said, "My fee covers only my services, not the cost of visits to specialists or many of the tests I may order," the website states. "This means that insurance may still be needed for much of the care I may order."

To be honest, the only thing you should truly be worried about your health insurance handling is that bill that is tens of thousands of dollars.

Again, even the cost of these supposedly expensive tests could follow the same path of Dr. Lamberts' re-imagination.

To get that "good" health insurance, as so many people have called and asked me for, means you are going to pay for it upfront.

You'll do this in the form of higher monthly premiums to cover the added benefits and risk associated with you having the option to use them, regardless if you do or not.

So the question you have to ask yourself is, why guarantee paying a health insurance company extra money if there's a good chance you won't use it?

Would you rather put that money back in you pocket at the end of the year? Even if you had to use it, at least you will have more freedom and control over how it's used.

The Power of Competition

The best part about all this, Dr. Lamberts has raised the bar. If more doctors adopt this approach it will force the less patient-focused doctors to take notice.

The entitled air that has engulfed the medical profession for the last half a century is going to be its ultimate demise. Coming to the realization they are just as much a part of the "healthcare problem" as insurance companies should be a sobering fact.

I've said it before, but you can't lower the cost of health insurance without lowering the cost of what it's trying to insure.

Removing something as crazy as primary doctors visits just might be one of the first steps.