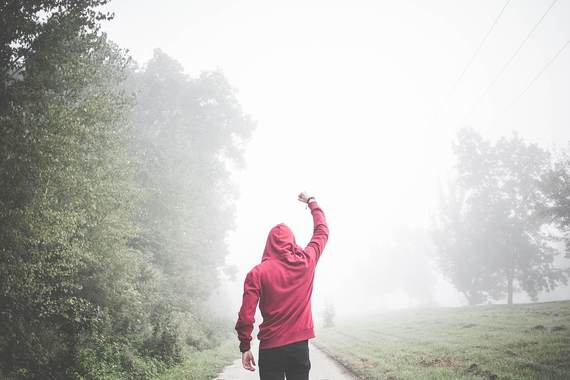 We're all working on something. Or maybe we haven't started, but we've been meaning to get around to it ... one of these days. Regardless of what stage we're at, staying motivated is a challenge. The excitement of a new endeavor wears off; it's all too easy to brush a project aside and pretend it doesn't exist sometimes. Pushing through it means encountering problems. It means struggle. It means potentially falling into (another) existential crisis.

For me, I've never been one of those people who is going all the time. I can pick up projects and work on them intensely and passionately for awhile; then, the motivation sputters and I leave everything in a corner to collect dust.

But it doesn't have to be that way.

I took some time lately to contemplate some of the reasons why these spurts of motivation peter out -- and how to get back on track.

One: You're thinking too big
Of course, it's practical and common sense to outline long-term goals and define your vision in the world out there. It's difficult to begin a project if you can't even fathom the end.

But only mapping out broad, long-term goals means there is a breadth of space for your motivation to dwindle between now and the finish line. If you haven't learned how to play one chord on the guitar yet but are preoccupied with ideas of music auditions, that objective is too distant to apply directly to your current task. Moreover, an overly big-picture goal doesn't provide any sense of direction by which to proceed.

Mark milestones along the way to major accomplishments. Smaller goals are heaps more attainable in the day-to-day, and create a path to track your progress. It may help to create a chart of the aspects that you:

A project becomes much more manageable when it is scaled down into smaller pieces. It has orientation. Seeing definite evidence of your progress as you complete smaller tasks is far more gratifying than taking stabs at a distant goal, knowing you're somewhat closer.

This kind of "self-motivation" may work in the short-term, but it is fundamentally self-destructive and propelled by fear; it's no wonder that anxiety is on the rise in recent years. Doing something because you're afraid of failure or falling behind is not a solid foundation for your ambitions in the long run. Your project becomes a competition between yourself and what you think everyone else is doing.

So if you spend a day, a few days, even a week, not really being productive, don't beat yourself up too much about it. We are only human and can't be expected to work at 100 percent capacity 24/7; we burn out sooner or later. Negative thinking and guilt-tripping will only begin to wear down your motivation, and you may start feeling as if you have to force yourself to work -- and if you aren't enthusiastic about what you're doing, that motivation will dissipate even faster. Be comfortable with yourself knowing you can rest, and still accomplish your goals. Use that off-time to refuel and think things over, or think about nothing project-related at all.

Just don't let it consume you -- set a definite time at which to resume work, and stick to it.

Three: You're tackling something you can't do entirely by yourself
I'm a one-woman band type of person, so I'm prone to doing this. I love handling things by myself because it's a challenge; I also have very specific creative visions when I work, so I'm always a little hesitant to bring someone else in who might not get it. But being too individualistic can result in biting off way more than you can chew. Furthermore, the task at hand may seem too difficult to accomplish at all, when it's actually just too difficult to do alone.

Take a step back and analyze whether this is the case. It is important that you recognize that you are not superhuman. Enlisting the help of other people means a wider skill set with which to work, and multiple perspectives to contribute to your creative cloud. Asking for help could even simply be soliciting advice or a second opinion. It's not weakness or relinquishing your individuality, but an opportunity to expand your project and learn from other people. Not to mention, it also means you and your project partners can motivate and inspire each other along the way.

Four: You're thinking too much
I am absolutely an overthinker and overanalyzer. I oftentimes catch myself dissecting the process and end results of a project without even having begun it.

All the analyzing and planning develop a myriad of expectations, what-could-go-wrongs, and what-ifs. While it's good to be mentally prepared for problems along the way, you can't expect to plan out every possible step. You have to let your ambitions take their own organic path.

What's more, this kind of overthinking inevitably turns negative. You begin mulling over all the possible permutations that could go wrong along the way, and doubting yourself. That tiny voice in your head, the one that tells you that you can't do things, starts to take over. And you may feel doomed by some kind of self-fulfiling prophecy of failure.

All that thinking could be spent doing, and realizing the progress you have made so far. Whenever I catch myself thinking a little too much about a project -- and especially when it begins to spiral downwards into negativity -- I immediately change channels and occupy my mind with something else. Take a break, take a walk, anything. Return with a fresh mind.

Five: You're not in it for yourself
Since #2 also relates to this factor, I'll reiterate myself for good measure: Don't let fear and anxiety be your motivators. Do let passion propel you towards your goals.

Thus, it's important to examine your motives carefully: why you're striving to achieve your goals. For whom you are working. Hopefully, it's ultimately for yourself -- and your self-realization, growth, and achievement.

At the end of the day, we are most driven to accomplish what resonates with us as human beings. Recognition, outward appearances, the satisfaction of others -- those factors may all play a role, but our dreams can't be built on them.

You have to want those goals yourself.

Think about whether your ambitions are 100 percent authentic to you, and whether you want them as ends in themselves. If that's not true, you may have to do a little soul-searching and reevaluate your plans in able to move forward with purpose. If that is true, take this opportunity to (first revel in that, and) remind yourself that if you truly will it, you can do it.

Now, go off and be motivated!

A version of this post originally appeared on Medium, in the publication Human Output.