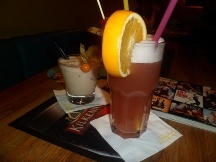 Okay, so the title of this post is a little misleading. I don't even know you, so how could I know if you're overweight -- or if you are, why you are?

But if you're reading this because you're out of ideas and are looking for another one, here goes. Here's how it unfolded for me.

One evening several years ago I gave up alcohol on a whim. I'd never been much of a drinker, and I was sipping at a margarita at a wedding reception when it hit me: "This feels unnecessary." I didn't like the taste of alcohol, and it never made me feel better -- only worse. So I quit.

I haven't missed it.

Several months later I wondered why I ate meat. Every time I ate a steak or even a hamburger I got a headache. So I stopped -- and I haven't missed that, either.

Somewhere along the way I decided instead of having favorite foods, I'd have favorite questions. My favorite question is from Gregg Levoy's book, Callings: "If your life passed before your eyes, would it hold your interest?" I realized one evening, trying to stop at twelve of my daughter's French fries, I bored myself. Having the same 20 pounds to lose for most of my adult life was just boring.

My second favorite question of all time is, "What would happen if...?"

The thing that always bothered me about previous attempts to just eat a certain way and be done with it was this. They always involved some combination of eating the "right" things, and rewarding myself with the "yummy" things. The right things were yummy, too -- but never, in my opinion, as yummy as the chips and cheese and cookies.

It was a constant tug of war between what I should eat and what I wanted to eat.

It didn't make sense, either. Why, when I felt so much better on the healthful fare, was my reward to binge on things that made me feel bad? You wouldn't tell a smoker who finally quit, "Hey, good job! Now, go ahead and enjoy a pack at the bar every Friday evening." And you wouldn't encourage a recovering alcoholic to join that person and pound a few down.

You quit smoking or drinking, you quit. That's what quitting is.

Why is junk food exempt? I knew how addicting a lot of what I'd been eating was. A donut only left me wanting more. A bowl of spinach exacted no such price.

It made me wonder if food that isn't good for me kept calling because I kept answering.

What if I stopped? What if I gave myself a chance to break what was, at best, a habit?

I wouldn't have to do it forever.

What would happen if, for a year, I took in only good?

We make promises to kids, and keep them. We forsake all others, in some ways, when we get married. But a lot of us treat promises to ourselves as a running joke. It's no wonder, as a friend told me once, when New Year's Day rolls around that little voice inside laughs at our so-called resolve: "Yeah, right." I wonder about the psychological toll that takes. I wonder how many of the rest of our best-laid plans are derailed because we don't trust ourselves to do right by ourselves.

What if, in one area of my life, I practiced having integrity -- period?

I didn't know if I was giving up junk food forever, and I thought the most interesting part of this experiment would begin on day one of year two. Had I really had, for example, my last cookie -- ever? I didn't know. I didn't know if I wanted that to be true. Maybe there was something about my old way of living, at least in smaller doses, that really did make life worth living.

I felt called to call off junk food for a year, and see what happened.

Here's what I can report. At the one-month point I was still planning the party I'd have eleven months later. I saw a buffet table piled high with donuts and cookies. Two months in I decided I was never going back to my old ways, that's how much better I felt and how relatively easy this new way of life was.

It's been almost five years now, and I can say with confidence: "This is who I am, now."

Every diet book I've perused suggests you reward yourself for being "good" by letting down and having whatever you want for one meal -- or even one day -- a week. For someone like me, and maybe like you, that's the undoing. I'm an "all or nothing" gal, and I could never get on top of what now seems an addiction to certain foods.

Are you overweight? Do you tell people you've tried everything? Have you tried this?