YOU STILL WANT TO BE MARRIED. It's been a year since that awful woman (me) with the three divorces wrote that incredibly (pick one: stupid, sexist, totally, completely UNTRUE) piece in The Huffington Post trying to make you feel bad because you were still single at 30- or 40-whatever. What gives her (me) the right to go around telling women what is wrong with them? People are always just trying to make women feel bad, that's all. Misogynists.

There's only one problem though. You're still single. And you still don't want to be. And ever since your sister/mom/co-worker/frenemy sent you that incredibly (pick one: dumb, mean, totally, completely FALSE) thing last year, it has crossed your mind (maaaybe once) that there might have been just the teensiest bit of truth to it. Maybe you are sort of bitchy. Maybe you don't want to date short men. Maybe the casual sex you've been trying to have never does stay as casual as you wish it would.

Well, fear not. As if the first six reasons weren't enough -- (and how could you forget those: 1) You're a Bitch, 2) You're Shallow 3) You're a Slut, 4) You're a Liar, 5) You're Selfish, and 6) You're Not Good Enough) -- here I am with four ALL NEW REASONS why you're still not married. And after you're done cussing me out, you'll see that all I'm really talking about here is how to be a better person. Because being a better person is how to get the relationship you want.

So, picking up right where we left off:

7. You're a Mess. You overdrink. You overeat. You overspend. You under-earn. Whatever it is, there's (at least) one big thing in your life -- an attitude, a behavior, a vice -- that you absolutely, for sure, under-no-circumstances want to let go of. And the bad news is, that is the ONE THING you absolutely, for-sure, under-no-circumstances WILL NOT be able to keep. At least not if you want to move forward. The sneaky part is that this thing holding you back feels like it is making your life more bearable! It's also telling you that you're fine! So how do you know if something is a problem? Easy. YOU'RE KEEPING IT A SECRET. If there's something you can't (or don't want) to tell your mom, your best friend, or the guy you're dating -- you can be sure it's getting in the way of having your best relationship.

8. You're Crazy. Crazy is where you LOVE INTENSITY. You want life to bring the exclamation points!!!!!!! Normal people, and relationships? Big, noisy YAWN. You think of yourself more like Angelina Jolie when she was with Billy Bob. Crazy is where you use your cell phone like an automatic weapon. You meet, have sex, fight and break up -- all by text message. Another sign you've got the crazies is if you are constantly telling long, involved stories in the break room about what happened this past weekend. You think your listeners are wowed and they are, but to them it's like watching an episode of "Fear Factor." Who doesn't want to watch another person eat bugs? In fact, a sure-fire way to know you're crazy is if more than one person has told you you'd be great on a reality show -- and you agree with them.

9. You're a Dude. It's not that you love the Cardinals, have short hair, or or make more money than most guys. It's that, when it comes to relationships, you want to hunt them down and kill them. You call guys, you text guys, you ask guys out. You have sex like it's a temp job, hoping that if you rock a guy's world, you'll get hired full-time. And it's not working for you, because right now, you are in a long-term, committed relationship with EXACTLY NONE of those dudes. Am I saying you should join a quilting circle? Wear ruffles all the time? Um, no. But you might want to see what it's like to let the game come to you. Because there's one requirement above all others a guy needs to possess to be your man: he has to REALLY WANT to be in a relationship with you. (Duh!) Fortunately, there's a foolproof way to find out just how much of a crap a guy gives: he will 1) ask for your contact information, and 2) HE WILL USE IT RIGHT AWAY. (Do not try to tell yourself he waited two weeks to call text you because he probably had to visit his grandmother in Milwaukee! Guys bring their phones to Milwaukee.) Prequalifying a man like this will prevent the mortgage meltdown that is your love life. Because at the end of the day, you don't need to know if a guy wants to donate his sperm to you. (The answer will probably be Oh, hell yes.) You want to know if he's willing to send your egg to college. And if a guy doesn't feel like taking you on a date, THE ANSWER IS NO.

10. You're Godless. Remember how I said that marriage is a spiritual path? Well, we're there. The point where I suggest something totally radical and punk-rock as a way of transforming whatever it is you have going on (or don't have going on) in the area of relationships. And here it is: I want you to get a god. Wait, come back! It's not necessarily what you think. What do I mean by god? Well, I don't mean a bearded dude in the sky who is going to give you a Mercedes and a husband if you're good and punish you if you're bad. That would be Santa Claus. I mean I want you to cultivate a sense of SPIRIT in your life, a relationship with the intangible, the unseen -- the power behind the oceans, gravity, chocolate and the Beatles. You know, the thing you experience in life where the hair stands up on your arms? The Big Something. You could just call it Love. Whatever you name it -- it's the game changer. Because when you mix the idea of spirit into your relationships, it no longer matters how many men are, techincally, out there. No more demographics, no more short guys and tall guys or chicks with cankles or ten extra pounds. There are no more lists of things you think you have to have in a mate. There are only two people on a spiritual assignment: TO LOVE EACH OTHER.

Alright, there you have it. Or, some of it. Because actually, I have way more to say about this subject. So much that I've written a whole book, called "Why You're Not Married... Yet." Not because I want to say mean stuff to you about your "flaws". I don't even think of it like that! When I say you're this and you're that, I'm not saying there's something wrong with you. Not really. I'm saying you're human. Which automatically means there's something wrong with you. (Ha!) Because to be human IS to be flawed. And to be married is to face an amazing challenge -- deal with those flaws in yourself, so you can (paradoxically) accept them in another person. So you can, you know, have your best relationship.

Yes, I have "failed" at marriage -- a lot. (Actually, I like to think of failure as "pre-success".) But who better than a three-time divorcee to lead a discussion about the stupid stuff women do in relationships? At least you know I won't go all sanctimonious on you. Because dude, whatever it is, I HAVE DONE IT. I've just decided to love myself anyway.

And as it turns out -- that's exactly what needed to happen all along.

I'm just trying to have a slumber party where we drink margaritas (actually, no more margaritas for me -- I was a mess, and I had to deal with it) and laugh and be honest with ourselves about the stupid stuff we are doing and talk about how we could do it better. Because it's not like anyone is ever truly finished being a bitch (or a mess, or crazy, or selfish). Nope, it's a practice. And in the process, we get to become better people -- and as a result of that, have better relationships. Okay, our best relationship.

Shoot. If I were giving away cars, it'd be just like Oprah. Except with swear words.

Take the quiz below to find out whether or not you need to read "Why You're Not Married... Yet." Answer as honestly as you can. If you're not sure, tell yourself you're ﬁne and skip to the next question. Then scroll to the bottom of this post to see what your score means.

Add Up Your Score:

One point for each "True" answer, plus any extra points as indicated. Don't cheat.

1-9 POINTS: YOU SORT OF NEED THIS BOOK

But you'll be pretty sure you already know everything in it. So read it really quick, then do your single best friend, sister, frenemy, or co-worker a favor and buy another copy for her. Tell her you totally think it's BS, but it was just so stupid you had to give it to her. Suggest that when she's done reading it you guys can get together and laugh about how wrong it was. Cross your ﬁngers that she'll end up learning something anyway.

In the medical world, there's ﬁne ﬁne, and then there's ﬁne-but-you're-going-to-have-to take-care-of-that-thing ﬁne. You're the latter. It's not that you'll never ﬁnd a happy relationship if you don't ﬁgure out what's going on with you; it's just that you'll ﬁnd it so much quicker if you do. And like a fungus, the longer you wait, the worse it gets. You just need to know exactly which type(s) of fungus you're dealing with. And by the time you're done reading this book, you will.

20-29 POINTS: YOU TOTALLY NEED THIS BOOK

Your love life is like New Year's Eve at the end of a really eaty, smoky, drinky year. You are exhausted. No one's denying you had some fun out there, but you are relieved the year is over so you can ﬁnally make some resolutions and get busy breaking them. For you, this book is like January 1 -- a chance to start over, and this time do it right. And if you're worried about falling off the wagon, don't. Because what you will learn in this book is that you are the wagon.

Quiz excerpted from "Why You're Not Married...Yet" by Tracy McMillan. Copyright 2012 by Tracy McMillan. Excerpted by permission of Ballantine Books, a division of Random House, Inc. All rights reserved. No part of this excerpt may be reproduced or reprinted without permission in writing from the publisher.

HuffPost Weddings will be chatting live with Tracy McMillan on May 31 at 3pm EST/12pm PST. Join us here and bring your questions.

Why You're Not Married . . . Yet: The Straight Talk You Need to Get the Relationship You Deserve
by Tracy Mcmillan

Tracy Mcmillan'sI Love You and I'm Leaving You Anyway: A Memoir [Hardcover](2010)
by T., (Author) Mcmillan 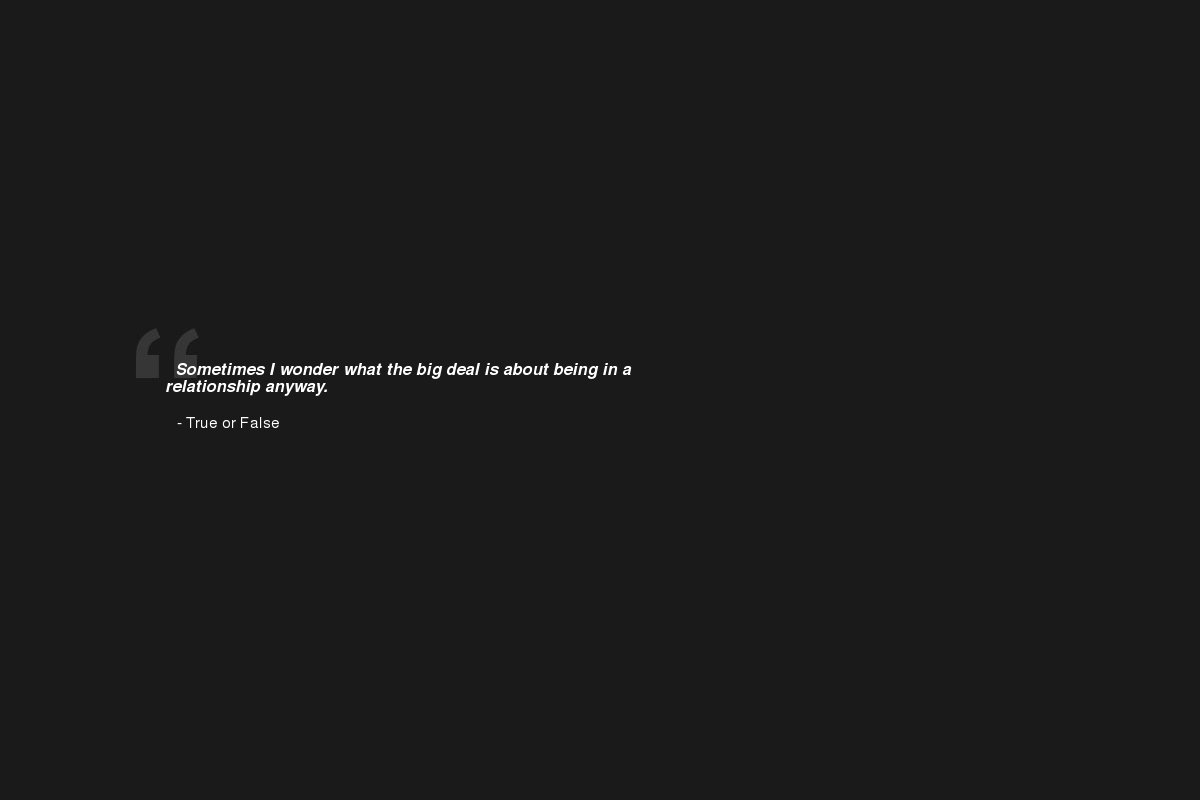