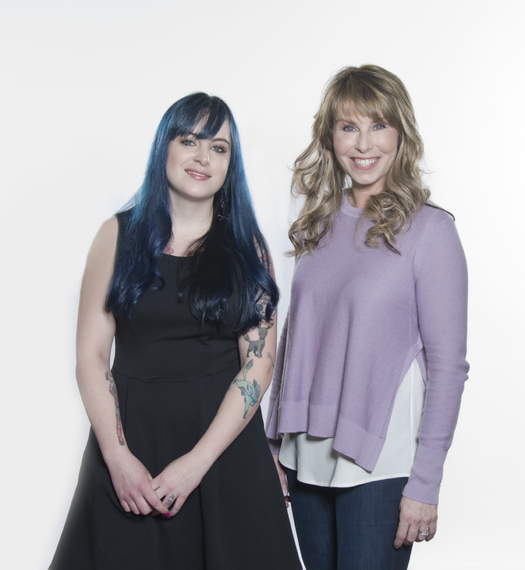 Hard work, a penchant for building big if you are going to build anything, and a tiny bit of luck....that's what it takes to build massive business empire according to mother-daughter duo, Tracey Noonan and Danielle "Dani" Vilagie, the entrepreneurs who have built the colossally successful Wicked Good Cupcakes out of Boston. They are the number one sellers of cupcake jars in the United States.

In 2010, daughter Dani moved out of the family home. Her mom, Tracey, wanted to make sure they kept on seeing one another regularly so she signed them up for a cake decorating class. A year later, the two launched a business making cupcakes, eventually launching a storefront in Cohasset, a small community South of Boston. In 2012 Tracey filled out an application online to compete on the ABC television show, Shark Tank. They were asked to produce a video about their product and then called to Los Angeles to present their mason-jar style Wicked Good Cupcakes. The show aired in 2013. Mr. Wonderful, Kevin O'Leary, saw talent and invested in the company. Almost overnight, this tiny cupcake bakery from the South Shore of Massachusetts went from grossing $300K a year, to almost the same amount each week. I sat down with the Wicked Good Cupcake family, including Dani and Tracey, and husband/dad Scott to find out what it takes to have Wicked Good success in business. Here are six lessons to building a Wicked Good business.

Get Input - Scott says that one of the most important pieces of advice he would impart upon any entrepreneur is to get input from everyone. Every customer, employee, vendor, business partner, and outsider should be able to offer their opinion on your product or service because sometimes they will see something you totally missed. Prior to launching a new dessert, Tracey, Dani, and Scott will ask for advice from everyone to ensure that nothing has been missed. As well, the team surveys each customer to ask about their experience in buying from Wicked Good Cupcakes in order to make sure the process is as good or better than the customer expected. All feedback goes direct to The Noonan's, not to an employee within the company. They feel that every individual's input is so valuable that it must go straight to the top of the organization.

Leverage Experts - I asked the team what it is like to work with Kevin O'Leary aka Mr. Wonderful from Shark Tank. They all agreed that working with O'Leary has created a massive boost in their business, perhaps even more so than being on the show. Kevin is accessible to the team 24/7 for input, advice, and ideas. As well, Kevin has provided the business with experts of all shapes and sizes. They have access to the best attorneys, accountants, and branding experts because of Kevin. Furthermore, the media loves Kevin and so his backing their company has given them much more than the capital needed to expand, it has given them exposure around the world, making it very easy to keep growing. Today, two years after having appeared on Shark Tank, the business continues to grow at a pace of 40 percent per year. Tracey, Dani, and Scott are so appreciative of the expert advice they've received through Kevin and his contacts that they return the favor by having an open door policy to entrepreneurs that Kevin sends their way for advice.

Fear Is Your Edge - Tracey says that her competitive advantage in building a massive empire is fear. Wicked Good Cupcakes is the number one seller of glass jar cupcakes in the world. Even on a bad day they sell more than 1000 cupcakes During the holidays they sell more like 6000 cupcakes a day. That's a lot of cupcakes. Yet, Tracey says that what drives her to work harder, to innovate new products, to perfect their systems constantly, is fear. What if nobody buys a cupcake tomorrow? Tracey feels a sense of responsibility to their employees, vendors, mentors, customers, and to the family, to make sure that Wicked Good Cupcakes remains strong and growing. She says fear is her edge in business. Scott says that Tracey has always been the type of person in business who will swim far enough off shore so that she's not sure if she will make it back. She always does, of course. She's unstoppable, explained Scott. The adrenaline of doing something big is what keeps her going.

Innovate, Innovate, Innovate - Tracey and Dani are constantly innovating their products. They are testing new flavors, new desserts, and new ideas to create an even better customer experience. For example, one area of their business that has really taken off is their customizable gifting options where wedding planners or corporate gifting departments can customize the labels on their jars. Tracey and Danielle say that innovation is an everyday part of their business. It requires that they listen to feedback. As well, it requires that they constantly monitor the upcoming trends in food, packaging, and colors because it all ties into what they must do next in their business. Tracey and Dani feel that many businesses relish in their success too long, whereas Wicked Good Cupcakes uses their success as a scorecard which tells them they are heading in the right direction, but should not slow down.

Handling Mistakes - The team at Wicked Good Cupcakes admits that building an empire has its challenges. Mistakes do happen. Occasionally a customer gets upset. Being Wicked Good in business, they say, requires you to realize that mistakes will happen along the way, and how you handle those mistakes is what will define your business. When mistakes happen they are quick to address it, fix it, make the customer happy, and then move on without obsessing over it.

Surround Yourself With Great People - Dani says that being an entrepreneur is hard, hard work. Years went by when she and her mom came to work every day and burned the midnight oil for little or no financial return. She said that most entrepreneurs are not going to have huge success right away so the key to keeping your chin up is to surround yourself with positive people who keep you excited about coming to work. Dani says that when seeking out employees for their business, the number one quality she looks for is attitude. Each employee at Wicked Good Cupcakes is responsible for keeping the rest of the team motivated, upbeat, and excited for the future.

Wicked Good Cupcakes is a massive cupcake empire built by Wicked Good entrepreneurs. They have created a revolution in a vertical with a lot of competition. Their strategy is simple; ask for input, leverage experts, let fear motivate you, innovate, embrace mistakes, and hire the right people. Success for them is happening every day, one bite at a time.