WikiLeaks has proven that the American government is running on an arcane set of principles led by people with their frame of reference in the past, with neither the infrastructure nor the people running it or serving it having adapted to the times in which we live. This last century thinking is the most dangerous threat to America today. For the revelatory scoop, the U.S. government may try to prosecute Wikileaks founder Julian Assange for espionage. 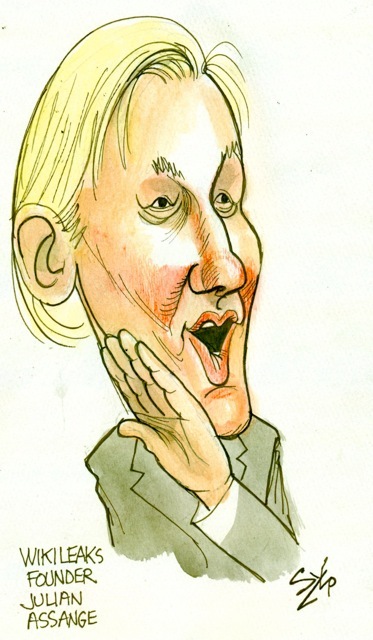 This is the state of the U.S. government at a time in history when Mark Zuckerberg created the notion of Facebook from his dorm room at Harvard, which made him a billionaire. It's Zuckerberg who is tagged with saying that it's "okay to break things" as long as your plan is "to make them better." The book Hackers: Heroes of the Computer Revolution was published in 1984! Fast forward to the cusp of 2011 and we have 20th-century minds running the government who are still shocked that Zuckerberg's hacker culture has turned itself on the U.S. government.

The unprepared idiocy boggles the mind.

It's exploded the heads of the Old Fogy guard inside the behemoth American bureaucracy.

Watching Morning Joe yesterday, I could only chuckle at Mike Barnicle and Joe Scarborough as they expressed their shock and dismay at some, as they saw it, lowly private in the Army, to paraphrase their characterization of the Army intelligence analyst and hacker, allegedly getting his hands on so much secret diplomatic material. Where have these guys been, the moon?

But in the modern military, which relies on information as much as bullets and bunkers, it's more easy than one might think to gain access to classified material and to disseminate it, according to interviews with numerous officials.

[Bradley] Manning's job was to make sure that other intelligence analysts in his group had access to everything that they were entitled to see. [...] Using keyword searches and a knowledge of routing nomenclature, any intelligence analyst -- even if he's sitting in a shack in Iraq -- can access pretty much any piece of data classified at the level of access he has.

[...] The important thing to know is that diplomatic cables are no longer transmitted over wires to clattering teletype machines. They're sent via e-mail over secured networks, and they are also stored on servers until they're erased. Cables and incident reports from the field are stored on servers in the form of PST files -- PS stands for "personal storage" -- e-mail archives that Microsoft's Outlook program uses to compress and store data.

So how did Manning allegedly manage to get access to the diplomatic cables? They're transmitted via e-mail in PDF form on a State Department network called ClassNet, but they're stored in PST form on servers and are searchable...

I first started writing in new media back in 1996, long before blogs were born, so this hacking event is not only unsurprising, but predictable.

Richard Clarke, cyber guru to former Pres. Bill Clinton, has been warning about a cyber attack against the U.S. since the '90s. "Good hackers can get through any password," he warned on NPR. Former Pres. George W. Bush and Dr. Condi Rice couldn't be bothered to listen to him about al Qaeda back in 2001. Rice demoted Clarke and his position to outside Cabinet level where Bill Clinton positioned him, because the Bush administration didn't think counterterrorism was much to worry about. Cyberterrorism barely crossed their radar. The Pentagon can't do everything.

"The Pentagon is all over this," he says. "The Pentagon has created a four-star general command called Cyber Command, which is a military organization with thousands of people in it to go to war using these [cyber]weapons. And also, Cyber Command's job is to defend the Pentagon. Now, who's defending us? Who's defending those pipelines and the railroads and the banks? The Obama administration's answer is pretty much, 'You're on your own,' that Cyber Command will defend our military, Homeland Security will someday have the capability to defend the rest of the civilian government -- it doesn't today -- but everybody else will have to do their own defense. That is a formula that will not work in the face of sophisticated threats."

Today we find, almost 10 years later, Pres. Obama was handed an archaic system from Mr. Bush, with neither president of either party bringing the technology of the United States government up to speed so that an intelligence analyst hacker couldn't break into secure files, download them, then walk away with the world diplomatic version of Peyton Place.

As for Sect. Clinton and the State Department, in the few documents released, WikiLeaks has made red many faces of the diplomatic branch of our government, which still believes "secrets" in the technological age means that what you say or write won't likely come back to haunt you on some web page on the Internet. Sect. Clinton is coming up across the cable chatter, while she travels abroad no doubt with the hopes that the connection between her name and this diplomatic pants dropping event will die down before she comes home. Clinton can also be thankful it's the holiday season or this thing could flare up into a real crisis for her and her legacy at State.

I'm not ginned up about what's been released, but what it reveals about how unprepared we still are after 9/11 for the realities of the dangers in our world is frightening. Nobody seems to get it. We are nowhere near ready to counter cyberterrorism, which is a very real threat and has been for the last decade.

Former governor Sarah Palin tore off a Facebook rant revealing she doesn't get the cyber world either. She sounds exactly like Barnicle and Scarborough, oblivious to the talents of hackers, including the youthful skulduggery that often is a characteristic of the inquisitive and the hyper intelligent on a mission. That said, it's very hard to argue with one particular thing she wrote:

The White House has now issued orders to federal departments and agencies asking them to take immediate steps to ensure that no more leaks like this happen again. It's of course important that we do all we can to prevent similar massive document leaks in the future. But why did the White House not publish these orders after the first leak back in July? What explains this strange lack of urgency on their part? [emphasis mine]

The part in bold is dead on. Palin's foreign policy adviser, Randall Scheunemann, knows how to couch this stuff all too well. Democrats simply got lucky it's Sarah Palin posing the question in a Facebook rant where she buries her lede under breathless Nixonian bloviating that includes calling Assange an "anti-American operative with blood on his hands."

Republican Rep. Pete King wants WikiLeaks to be charged as a terrorist organization. Now, I think that's daft, but he might actually have a case if our government actually took cyber security seriously, as Clarke tried to get done during his tenure with Clinton and into George W. Bush's first year. But our entire government is way behind in anything remotely resembling 21st-century cyber security.

Pres. Obama was supposed to represent both new politics and a new 21st-century era. So, you've really got to ask why in the hell U.S. technological and cyber security wasn't a top priority and why we're not leading on this issue, making it a top priority as part of the responsibility of being the largest super power in the world.

As the dust settles, the embarrassment will settle in at the State Department as well. Sect. Clinton has had a miserable mess dumped in her lap via WikiLeaks, which she handled with grace yesterday, but it doesn't diminish the obvious lack of understanding at State about the technical world in which we live, with the security breach allowed serious. You've also got to wonder when the diplomats are going to get that this isn't 1950 anymore.

Well over ten years after Richard Clarke made his warnings, a cyber attack has occurred and the Democratic administration of Pres. Barack Obama has been embarrassed to the bone, because it didn't come from China or some other nosy country looking for our secrets, it came from within.

Listening to everyone squealing about the horrors of what WikiLeaks perpetrated, including Jamie Rubin and many other experts today, their defensive protestations and the accusations leveled at WikiLeaks had a cornered animal quality. Rubin saying WikiLeaks "stole" the material then posted them on the web seemed to excuse and even ignore the lax security protocol that allowed State to be burgled.

There is also something oddly out of tone about people representing a democratic republic taking the position that the American public needs to be shielded from knowing that diplomats can be petty, too. But also that U.S. foreign policy aids thugs in defrauding their own people, while maintaining 20th-century foreign policy that no longer serves anyone.

Bob Woodward got something right last night when he talked on CNN about the sheer volume of the document load and what might await, but also the necessity and daunting task of combing through what is still unknown, which is the responsibility of Wikileaks. The Pentagon Papers this latest leak is not, because there is something vastly random and unknowable about all that's contained within, no road map foreseeable.

Last July the Washington Post published a stunning article on the hidden world of secrets that has grown out of control, reporting about "1,271 government organizations and 1,931 private companies" involved in our secret national security complex, now with more than two million people by some estimates involved, and "in Washington and the surrounding area, 33 building complexes for top-secret intelligence work are under construction or have been built since September 2001. Together they occupy the equivalent of almost three Pentagons or 22 U.S. Capitol buildings -- about 17 million square feet of space."

There were many warnings about the eventuality of secrets being spilled, but also that a cyber attack was inevitable. Pres. Obama isn't the only one to blame, that's for sure. He's just the latest leader to ignore them.