As a footnote to my recent piece in The Huffington Post regarding WikiLeaks -- and I am grateful for elucidating reader comments to it -- may I suggest that a dirty little secret at the State Department -- at least when I had the privilege of being part of this organization until 2003 -- is that no one there reads cables (telegrams from overseas US embassies, just disclosed by WikiLeaks) with the care and attention they deserve. Indeed, the only readers of these dispatches from the field -- and a countless number of them reach Foggy Bottom every day -- often turn out to be the persons writing them.

Back at DC headquarters, an overworked staff doesn't have time to examine, let alone digest, lengthy and even not-so-lengthy missives from abroad, as their working day is consumed by answering phone calls from everyone under the sun, reacting to emails, and coordinating activities within a confused bureaucracy (they also have to each lunch; classified materials are not allowed in the cafeteria). 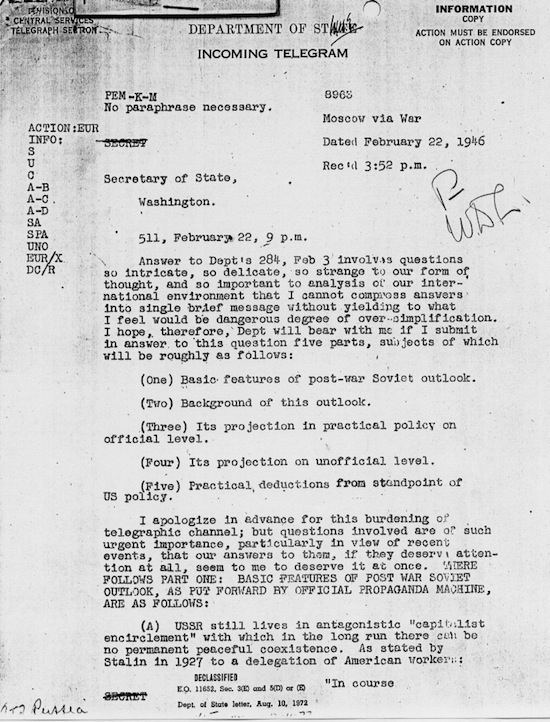 With Twitter, Facebook, and other attention-grabbing social media, "cables" are doubtless going, even more than before, the way the mainstream media is going: straight into the IOW, my acronym for the information-overload wastebasket.

Even hardworking State Department country "desk officers" simply are physically and mentally unable, in this age of instant communications and constant interruptions, to examine thoroughly all the written stuff that comes in from their fellow diplomats posted overseas.

I urge these desk officers, as a former desk officer myself (for France, Spain and Portugal, in the early 80s at the United States Information Agency, in charge of US public diplomacy during the Cold War, and consolidated into the State Department in 1999) to correct me if I'm wrong.

But now, quite suddenly, thanks to WikiLeaks, this arguably anachronistic method of communication, cables -- valuable documents, not only about what is occurring throughout the world, but also as historical records -- are, despite their lack of "coolness," actually being read and discussed worldwide! (Even, I venture to say, on the Seventh Floor of the State Department, where its leadership sits).

So the authors of these often memorable but neglected missives -- while they (their authors) are doubtless concerned about their work being revealed to America's mortal enemies and potentially offended friends -- must have a certain sense of (well-hidden?) satisfaction that their carefully written communications have at last found an audience.

I recall, if my memory serves me right, George Kennan noting, in his published writings, how enthused he was that his eventually famous Long Telegram actually caught the attention of Washington, which had not been the case, he notes, with his previous messages.

Perhaps this great but reclusive diplomat/intellectual -- who was, at heart, a littérateur aspiring (as a person well acquainted with him once pointed out to me) to match the prose of the novelist F. Scott Fitzgerald, another Princetonian -- would have been delighted that a Complete Collection of his Cables, hitherto classified, and largely unread, even (especially?) by his colleagues, was at last there for all the world to admire -- through WikiLeaks, an organization he would not, I'm quite sure, have approved of.