Wikipedia, the world's largest online encyclopedia, ranks near the top of the Internet's most-visited websites. According to web data-tracking company Alexia, Wikipedia currently sits fifth from the top of the 500 most popular sites in the world; at the time of this writing, only Yahoo, YouTube, Facebook and Google enjoyed more traffic. But despite its global reach, Wikipedia's users tend to favor certain languages above others.

Mark Graham, a research fellow at the Oxford Internet Institute, led a team of researchers who broke down Wikipedia's geotagged articles by language and examined the global scope of the encyclopedia. They plotted these data onto maps of the world to show the spread of languages within the encyclopedia.

Perhaps unsurprisingly, the most geotagged entries had been written for Wikipedia's English-language edition. Geotagging data collected by Graham's team shows that the United States and Europe are the two most popular regions written about in English.

Indeed, an overview of English Wikipedia reveals it to be Wikipedia's largest edition, with over 3,795,081 articles. According to Graham, the English edition also has over 700,000 geotagged articles, the most of any of Wikipedia's 282 language editions.

And where do these contributors primarily reside? Wikipedia's most recent analysis of the origin of page edits found that a whopping 44 percent of English-language edits are made by people inside the United States, 16.3 percent are from the United Kingdom and 6.6 percent are from Canada.

The Guardian points out that Graham has noted some interesting oddities in his examination of these maps. Says Graham,

If you look closely at the Arabic or Persian maps you might see some interesting patterns (for instance look closely at the patterns in the US). You see a similar sort of unexpected spatial distribution of articles in the map of Swahili Wikipedia [...] (i.e. why are there so many articles in Turkey?). The answer is simply a few dedicated editors creating stub articles about relatively structured topics such as cities in Turkey (in the Swahili Wikipedia) or every county in the US state of Georgia (in the Arabic Wikipedia).

Wikipedia founder Jimmy Wales recently sat down with The Huffington Post's Bianca Bosker and discussed the project's goals and challenges. He also mentioned the disparity that exists between the site English-language version and its non-English counterparts and spoke of narrowing that gap by encouraging Wikipedia's growth around the world.

“Wikipedia’s vision statement is to provide a free encyclopedia for every single person on the planet in their own language, so it’s core to our mission that we focus a lot on the developing world where Wikipedia is behind where it could be,” Wales told The Huffington Post. “We already have a free encyclopedia in English, and we want to improve it, but really, I’m more and more focused on growth in the developing world.”

Take a look at the slideshow (below) to see some of the languages that Graham and his team mapped. You can view more of Mark Graham's work at his website, Zero Geography. You can also follow him on Twitter (@geoplace).

For more fun with Wikipedia's geotagged articles, check out a visual history of the world, as told by Wikipedia. 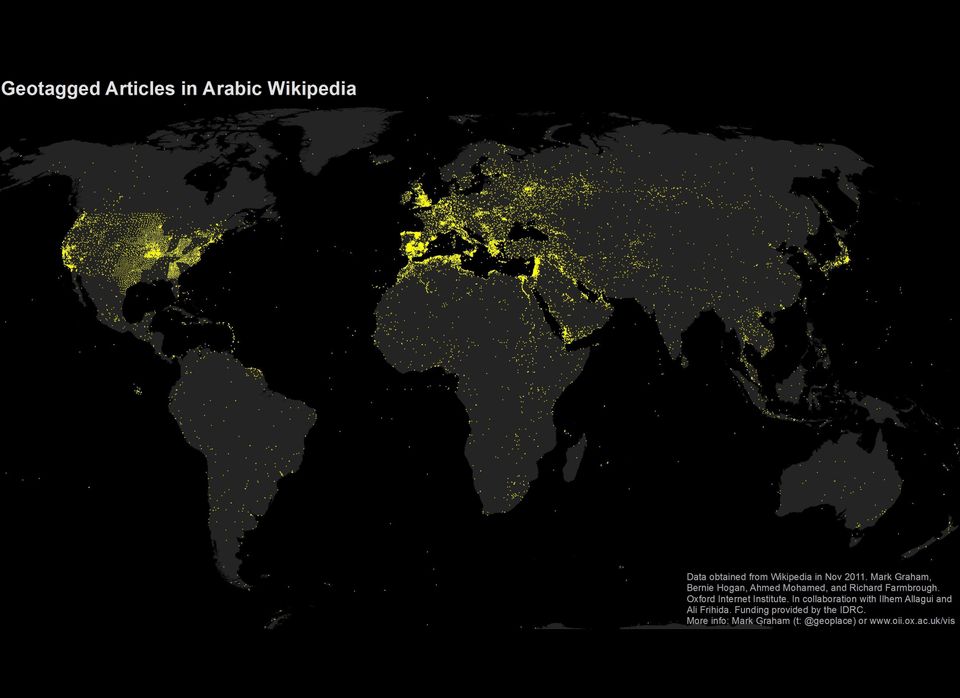