The New Orleans Jazz & Heritage Festival 2015 ended its first day with a bang. And a series of lightning flashes. Then torrential rain, but not before headliners from Wilco to Keith Urban to Jimmy Cliff worked in as much music as they could before the weather shut down their respective stages.

My first stop-in-your-tracks moment was the Kambuka African Dance & Drum Collective thanks to the kind of serendipity that Jazz Fest specializes in providing. You don't know what's just around the corner, but it's always worth making the turn. 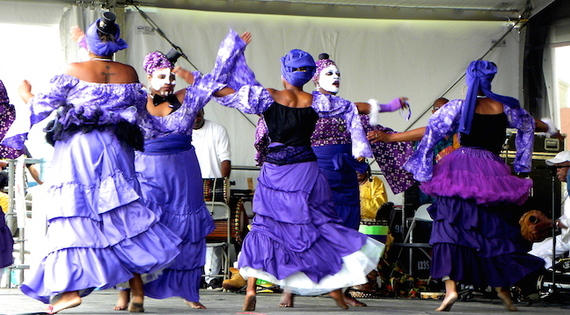 "I will rise again, through rain and flood and wind," Sean Johnson & the Wild Lotus Band sang just before the heavy weather arrived. "The clouds will pass, the sun will shine and I will see again." The band has a loyal following that ends the set with a sea of waving hands in an annual moment of Zen.

Transitioning from trance to dance, we caught Royal Teeth, newly signed to Elektra Records. Guitarist / vocalist Gary Larsen says that after their third year performing at fest, "Each year gets better for us. There's always a familiar connection we have with the crowd at Jazz Fest because they are our friends and our neighbors. The crowd is there for the dancing and the energy you can only find at a New Orleans festival, so we try to bring out all the stops each year. They welcome us with open arms. It's an honor to be able to play such a great festival at home and feel the love from our city." Exuding positivity during their set, Larson told the crowd: "You look beautiful, New Orleans!" Since I had eaten a beignet covered in powdered sugar while wearing black, I resembled a speckled trout but appreciated the sentiment. 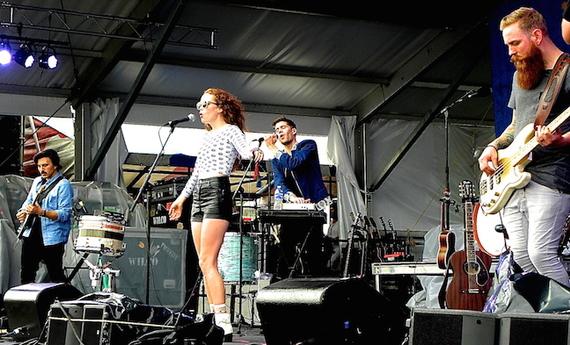 Next, we headed to the WWOZ Jazz Tent in case of rain and because New Orleans native son Nicholas Payton nearly blew the tent-top off with his Nicholas Payton Trio featuring Vicente Archer on bass and Bill Stewart on drums. Payton's new album is titled Numbers, and #5 was a triumph. Payton refers to his genre as Black American Music (#BAM) rather than jazz. Since the state of jazz ends up hotly debated before, during and after Jazz Fest every year, what it is called may as well be part of that conversation. 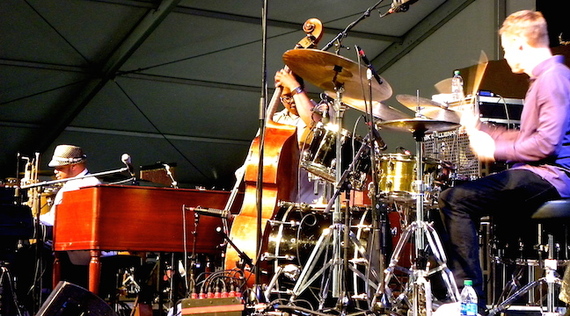 David Fricke, marking 30 years at Rolling Stone Magazine, is one of many writers whose festival interviews have given audiences a look behind the scenes over the years. After one of Wilco's previous Jazz Fest appearances, he interviewed bassist John Stirratt and asked what new albums were inspiring him. Stirratt mentioned legendary songwriter Bobby Charles' new release. When my husband told Dr. John about the shout out, he called Bobby to pass along the compliment. Their phone conversations were always long and legendary. At one point Dr. John clarified to Bobby: "Wilco ... No, NOT a washing machine!! ..." Once that was cleared up, Bobby was happy to know he was remembered and we got to tell Stirratt that Bobby Charles thought his band was an appliance. Bobby died later that year, so it was meaningful that he had the chance to hear the praise from a fellow Louisiana native.

Wilco remains as popular at Jazz Fest as they are in their hometown of Chicago, and after today the band has four Fest appearances under their belt. Jeff Tweedy told the crowd: "I don't know how many times we've played here but this feels like the best." He then gave a shout to an audience member whose sign read: "It could be worse" and said: "That's our motto. Did you know that? On our guitar pics it says: "It could be worse. We wanted to send a message that hopeful, but not TOO hopeful."

The band then launched into "Secrets of the Sea" while the crowd watched the clouds gather. It felt just hopeful enough.