Wolves are not only caught in the crossfire between rural ranchers and more urban wildlife advocates; this most misunderstood and maligned animal is also trapped along a cultural fault line between the Old and the New West. In this new century, the West has modeled a new and much more tolerant way of living with wolves. In 2011, the famous wandering wolf, OR-7 (Journey), dispersed from his Imnaha Pack in Oregon to trek 1,200 miles. He was the first wolf sighted in California in almost a century. 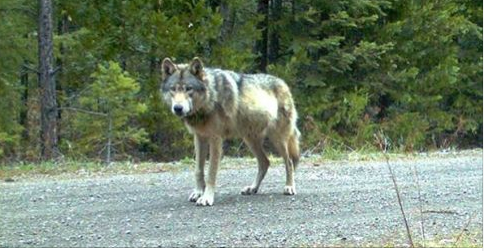 OR-7 was graciously greeted and welcomed in California whose bounty hunters had wiped out the last wolf in 1924. This lone wolf and his epic search for a mate was like following a "folk hero." His story is told in a wildly popular, award-winning movie, Or-7 The Journey. OR-7 wasn't a lone wolf for long. "It was a real long shot that a female wolf found him," said John Stephenson of the U.S. Fish and Wildlife Service.

But find him, she did. California Fish and Wildlife cameras unexpectedly revealed Or-7 traveling with a slender, darker female--and it was breeding season. It was a mystery where OR-7's mate came from, but conservationists embraced her presence. By the summer of 2015, OR-7 had fathered two families of pups to form the Rogue River wolves, now ranging south of Crater Lake National Park in Oregon's Southern Cascades. 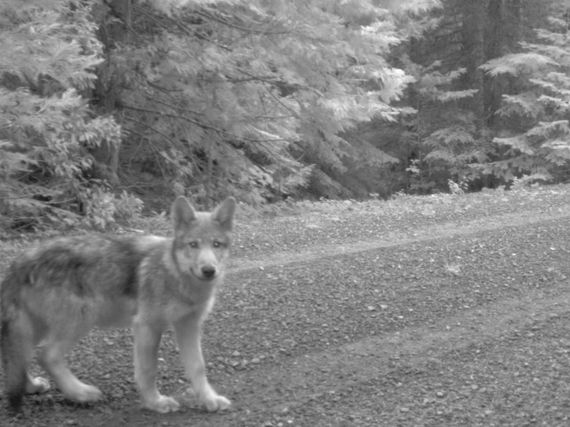 It seemed that Oregon and the West was now on the cutting-edge of wolf recovery-- a more far-sighted and sustainable future for wolves, after the state-sanctioned wolf extermination in the Rocky Mountain States. And where new legislation now before Congress would take gray wolves off the Endangered Species list in Michigan, Wisconsin, Minnesota, and Wyoming.

"It's such a significant moment, such a big step forward to have wolves back in the Cascades where they belong," said Rob Klavins, of Oregon Wild. "It's a richer, healthier, wilder landscape with them in it. They're a symbol of the unsanitized West. The real thing."

What is the Real West and the real future here for wild wolves? That's the debate now howling through Western States this month after Oregon regressed to Old West prejudices by delisting the wolf from the state's endangered species protection. Under Oregon's wolf management plan, ranchers can apply for permits to shoot wolves if they suffer livestock loss. Will the penalties for poaching wolves be less serious now? Will this state decision pave the way for the rampant wolf hunting we see in Rocky Mountain States like Idaho?

Already there are movements to sue the state's Wildlife Commission for the delisting, calling it unlawful and premature; they are asking the state legislature and Governor Kate Brown to reverse this decision. Oregon's Representative, Peter DeFazio, has called his state's wolf delisting "outrageous" and not based on "sound science."

Wolves first returned to Oregon only a decade ago and there are now only 83 wolves returned to their native territory, mostly in northeastern Oregon. Independent scientists have publically commented that 83 wolves is not a fully recovered or sustainable population. A population of a mere 83 wolves represents only five percent of what scientists believe the state could support, since wolves have been eradicated from 90 percent of their historic range.

A balanced and comprehensive article in Oregon's Statesman Journal looks at all sides of the pro-or-anti-wolf arguments. It cites a recent study on wolf habitat in Oregon. "Oregon could support an estimated 1,400 wolves statewide," the report says; and there is "ample wolf habitat even farther west of the Cascades."

Over 90 percent of the 22,000 public comments favored maintaining protection for the wolves. Yet the Wildlife Commission didn't listen to science or the public outcry. They reverted to Old West priorities that mainly benefit ranchers.But there are some hunters and ranchers who are practical and far-sighted enough to realize that the wild wolves--and the fellow citizens who want full wolf recovery--are here to stay. So the Old West must adapt to a new West.

Many ranchers who are tolerant of wolf recovery are often afraid to speak out publically. But these are the new voices that will move the conversation along from the endless polarized battles between anti-and-pro-wolf. And they are the future. One of these thoughtful ranchers wrote me this letter:

"There is nothing more upsetting to a rancher than having livestock
killed by predators, so I understand their anger and desire to kill off wolves. As a cattle farmer myself, I also imagine it's hard to hear people who don't make their living off the land calling for a return of the wolves to the wild. Yet in the East where my family raises cattle, we simply have to take a different approach to ranching than mass slaughter of wildlife. Instead, our strategy is to protect our livestock from predation. We don't leave our cows way out in the woods during calving season. Instead, we bring our cows closer to home to protect them. If a wild animal makes a kill, then we know we've been slack and have to reevaluate our management strategy. In the last eleven years, we've never killed a single wild animal.

We've learned that predators keep the whole ecosystem balanced by keeping rodent, rabbit, and groundhog populations down, which also benefits our farm. Western ranchers who graze on public land--something we don't have the luxury to do in the East--have come to have an entitlement attitude, giving all farmers a bad name. If we have to work hard to protect our livestock, while Western ranchers use land subsidized by taxpayers and then demand that public agencies use public money to kill off wolves rather than tightening up their own management strategies, then clearly they have moved from being so-called 'cowboys' to standing in the welfare lines."

Ranchers have grazed on our public lands for centuries, as if they are only children who don't want to share with any new siblings. Instead of more generations of single-minded wolf control for ranchers, we need self-control and ecosystem balance. And to finally practice what we teach all our children--to share. 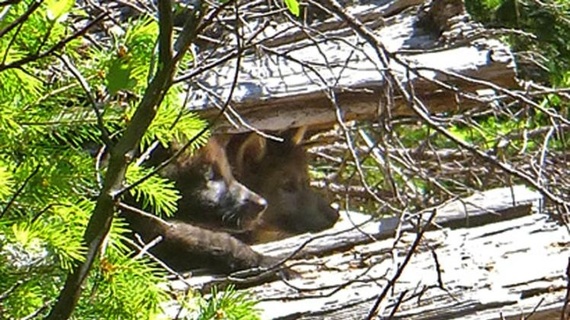 OR-7's pups peek out from a log on the Rogue River. Photo credit: U.S. Fish and Wildlife Services

Oregon's delisting of wolves is not worthy of this usually progressive state. Instead of regressing to prejudices of the Old West, the rest of us in the West can forge new win-win alliances between more far-sighted ranchers and hunters and conservationists. Until then, perhaps OR-7 and his family should migrate back to California or up to Washington where wolves are still better protected. Where the New West--for all people and wolves--is being won.~

Get Involved: Ask Oregon's governor and legislature to reverse the Fish and Wildlife commission's delisting of wolves. Sign the petition to support real wolf recovery.

Bio: Brenda Peterson is a National Geographic author of 18 books, who has covered wolf issues for two decades. She is at work on a new book about wolves with photographer, Annie Marie Musselman. For more: www.BrendaPetersonBooks.com