For several years now, I've been working with WildAid to promote wildlife conservation and to reduce the demand for products derived from endangered or threatened species. It's encouraging to see how many people have been supportive of the campaign to reduce pressure on the world's sharks by saying "no" to shark fin soup. Since becoming involved in this campaign and learning more about the threats to wildlife, I wanted to go and see what's happening to some of these animals myself and so I'm heading to Africa for the first time to learn about elephants and rhinos, two species in peril as a result of demand for ivory and rhino horn.

After finishing up the great experience of commentating on Olympic basketball for CCTV, my journey begins at London's world-renowned Natural History Museum, a beautiful building dating back to 1873, with one of the world's best collections of fossils and animal specimens -- approximately 70 million items in total. I wanted to learn more about our planet's wildlife, both past and present, and better understand the root and the implications of extinction.

My guide is Dr. Samuel Turvey of the Zoological Society of London, who spent time studying in China. We started in the Dinosaur Hall -- beautiful and impressive. It would have been amazing to see one of these animals alive. Next to these guys, I'm feeling pretty small. Their extinction is thought to have been caused by an asteroid hitting the earth, causing a massive dust cloud -- unavoidable and natural.

We saw the skeletons and exhibits of many animals that are now extinct. I learned that, in the grand scheme of things, extinction can be a natural process, a part of animals and plants adapting and changing -- all part of evolution. But every so often there is a mass extinction event like the asteroid strike, which scientists believe wiped out the dinosaurs.

Many scientists believe we are now in the middle of the sixth great mass extinction, but for the first time, it's being caused by an animal -- human beings. 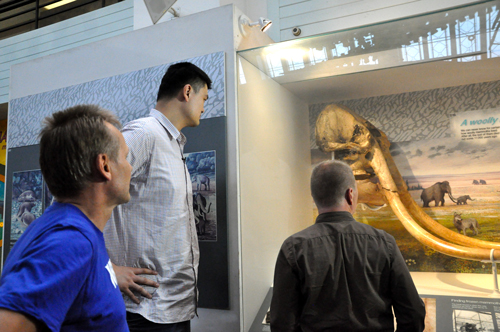 Now for many species facing extinction or near extinction, the threat is being caused by human activity -- deforestation or the conversion of habitat to agricultural land, introducing foreign species that wipe out local species, and from over hunting.

Scientists estimate the current rate of extinction is perhaps 1,000 times greater than what would be considered natural. And the scale and pace of the changes is so extreme that animals don't have time to adapt and evolve.

Seeing all these animals made me realize the amazing diversity of this incredible planet we inhabit and how shortsighted we are if we let more creatures disappear on our watch and by our hand.

The tour continued with woolly mammoths, giant ground sloths and the Giant Moa bird. From what we know, it seems many large animals like this lived all over the world. Today, Dr. Turvey tells me that the only places you can really see animals of this stature and witness great wildlife diversity are in Africa and a few isolated parts of Asia. I learned that elephants and rhinos once thrived in China, but today we only have a few elephants and rhinos are long gone.

Both elephants and rhinos are being hunted at record levels for their ivory and horns. I was really shocked to learn that even dead rhinos aren't safe. Across Europe, organized criminals have been stealing rhino horns from museums to supply the Asian market for rhino horns. Now, museums are replacing the horns on exhibit with fake ones. Sam told me, ironically, many of these museum horns may have been treated with preservatives so anyone trying to use these stolen horns may actually be poisoning themselves.

It's sad that even our museums aren't safe from the demand. If people are resorting to stealing rhino horns from museums to meet the demand, this doesn't bode well for rhinos in the wild.

We'll find out more in Africa. You can follow my journey at http://yaomingblog.com 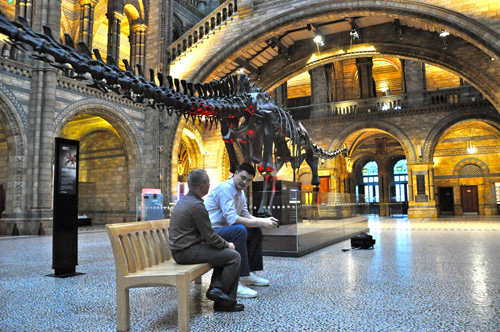 Dr. Samuel Turvey and Yao Ming in the Central Hall of the Natural History Museum in London
Courtesy of WildAid