If you have birdfeeders in your yard, you know how challenging it can be to keep squirrels away from them. Like songbirds, squirrels simply can't resist the bountiful buffet of seeds you've provided!

There are many "squirrel proof" feeders and devices sold, some of which work better than others. 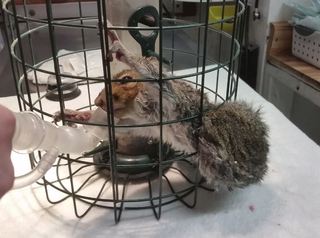 The cage-like design of this feeder is usually fairly effective at keeping squirrels out... but squirrels are tenacious, especially when they're hungry.

This young female squirrel probably thought she had it made when she got inside the bars of this "squirrel proof" feeder. All those delicious sunflower seeds within her grasp!

But then... oops! Somehow she suddenly found herself stuck with her back half and head inside the metal bars, but her furry belly trapped and twisted on the outside.

Fortunately, the San Rafael homeowner, Susan, was home that afternoon and saw the squirrel struggling frantically, and unsuccessfully to free herself. Even more fortunately, Susan knew about WildCare and called our hotline for advice. Our 24-hour hotline receives over 12,000 calls every year, and quite a few of them are about wild animals that have gotten themselves stuck in various objects. Usually animals can extricate themselves if given some time. Susan kept an eye on the squirrel for about 20 minutes but when she realized that there was no way the squirrel could get free, she called back for advice on how to proceed. 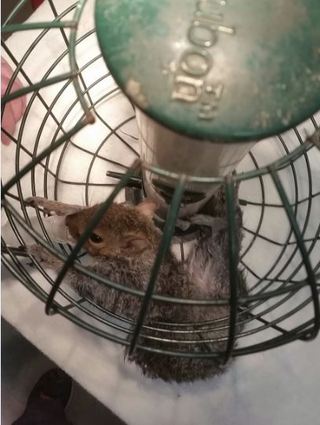 Adult squirrels have very large teeth and strong jaws. It was too dangerous for Susan to try to remove the squirrel on her own, so she placed a large blanket over the squirrel and the feeder, (covering the squirrel's eyes helps to reduce her stress and struggling), lifted the entire bundle off its birdfeeder hanger and placed it in a trash can, which she then rushed to WildCare's Wildlife Hospital.

WildCare Medical Staff has seen a lot of squirrels do a lot of crazy things but this one might take the cake! How on earth did this animal manage to get herself so stuck?

On intake it was immediately clear that this would not be a simple extraction, so staffers sedated the terrified animal and decided how to extricate her from her situation. Luckily our medical treatment room also boasts a supply of tools for such situations... we never know exactly what to plan for in wildlife medicine, but we know we need to plan for the unknown!

In the video above, the squirrel is sedated to make sure she's completely relaxed for her own stress level as well as for the safety of staff. The squirrel was so tightly interwoven between the bars that even under sedation she could not be maneuvered out. Medical Staff had to use wire cutters to cut the bars, and pliers to bend them away to be able to gently remove the squirrel from the cage. 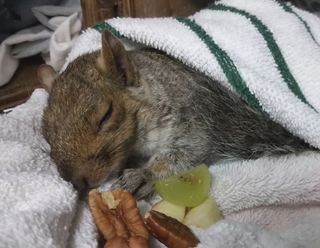 While there were no external wounds, the animal's stomach was largely distended. The primary concern in situations like this is that when body parts are constricted for too long (such as a paw in a rat trap) it will result in pressure necrosis, a condition in which tissue dies from the inside out but isn't visible for the first few days. Since the squirrel's hips, spine and abdomen had been pinched by the cage, Medical Staff was also very concerned that she could have broken bones in her attempts to escape, and/or that her stomach and other internal organs could have been injured or stopped functioning.

While WildCare's Wildlife Hospital does not have ultrasound capabilities, radiographs (x-rays) were taken in which we could see that her internal organs were pushed up into her chest cavity and a single rib was broken. There is no treatment for either of these injuries in a squirrel, so she was given pain medication and cage rest and was monitored over the following two weeks to ensure that everything went back to normal and no pressure necrosis developed.

In the video below, the squirrel is just waking up from sedation after being removed from the birdfeeder. She's still a little wobbly, but Medical Staff was very encouraged to see that she immediately did what squirrels do best-- she picked up a nut and started nibbling.

Over the next two weeks, this squirrel recovered quickly. She took full advantage of the healthy and varied diet provided by WildCare volunteers, and at the end of the two weeks she was careening around her enclosure like any healthy squirrel. It was time to return her to her home!

Watch in the second video below as she leaps from her carrier, scurries up a tree... happy, healthy and already heading for those birdfeeders again!