Suffocating smoke blew into the streets and schools of Cashmere, Wash., in September -- the billowing byproduct of wildfires blazing in forests surrounding the town and a harbinger of what experts say is a public health threat that increases with climate change.

"Everyone was in third period," ninth-grader Hugo Pina told Seattle's KING 5 News. "We were all studying. Students said their heads hurt. They couldn't breathe."

All Cashmere public school students were sent home, and didn't return for more than a week. Administrators went as far as to postpone the homecoming football game.

While wildfires are a staple in central Washington state, last fall's fires were unusual for their timing and intensity, experts told The Huffington Post. The late-season blazes sparked by lightning raged for more than a month, resulting in the highest smoke concentrations ever recorded in several central Washington communities.

"It just didn't go away," said Mary Small, a registered nurse with the Chelan-Douglas Health District, noting the presence of an inversion layer in the atmosphere that kept the air stagnant -- a phenomenon more typical late in the year. "It stayed and stayed, with air quality readings so high above hazardous for so long. It was phenomenal." 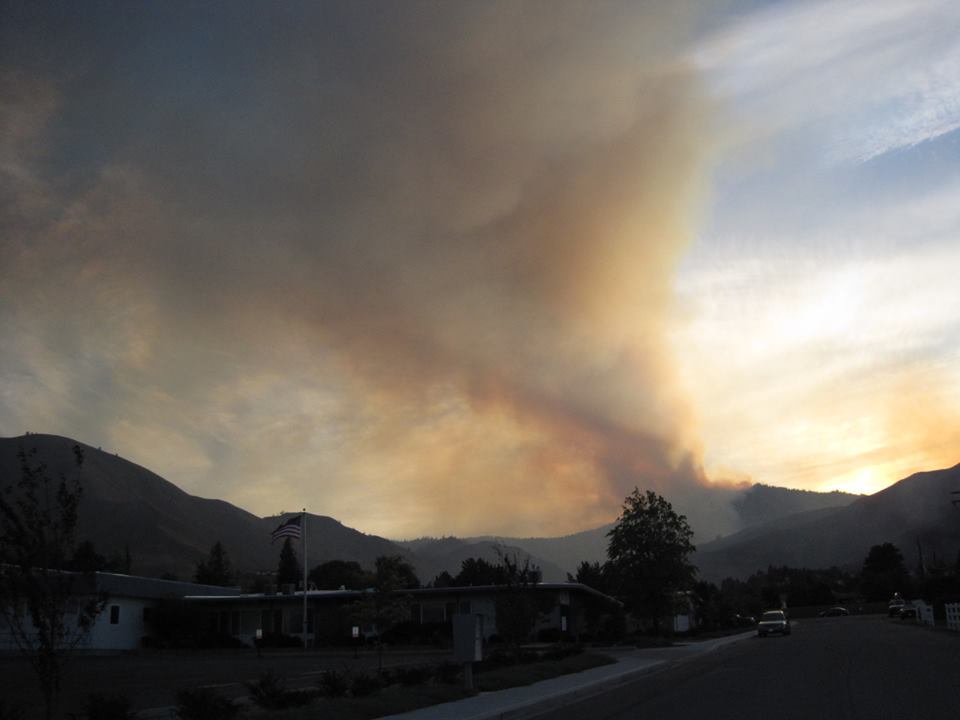 Smoke fills the skies above Cascade Christian Academy in Wenatchee, Wash., one of the cities hardest hit by the wildfires. (Hannah Koch)

Average daily measurements of fine particulate matter -- the stuff tiny enough to slip into people's lungs and bloodstream and wreck havoc on the body -- hit 1,100 micrograms per cubic meter of air. The federal standard is 35 micrograms per cubic meter, with levels above 135 deemed hazardous by the state Department of Ecology. Some communities spent weeks with average fine particulate matter readings above that hazardous level.

"We absolutely saw health effects," said Small. She noted that the number of people visiting hospitals with respiratory complaints such as bronchitis, wheezing and chest pain more than doubled from the previous year.

Washingtonians are now bracing for more trouble this year, and in years to come. The total annual acres burned by fire in the region will more than triple by the year 2080 as a result of climate change, the state predicts.

A similar scenario is playing out across much of the West. This year's fire season is already heating up and experts predict it will stay very active late into the year.

"There's a strong relationship between wildfires and climate," Jennifer Marlon, a researcher at the Yale School of Forestry and Environmental Studies, said during a press call on Tuesday. "Fires are very sensitive to temperature changes."

The connection between heat and fire sounds simple enough. Yet a changing climate may actually intensify fire seasons a variety of ways. Warmer, drier weather and earlier snow melts can lengthen fire's window of opportunity, for example, while a predicted increase in lightning offers more chances to ignite the forest-turned-kindling.

Prior fire suppression measures -- and not using strategic, controlled burns -- is also stoking the risk, according to Janice Peterson, a forest service air resource specialist with the Pacific Wildland Fire Sciences Lab in Seattle. She noted that while federal air quality rules for states are pretty strict when it comes to human-ignited fires, no such regulation exists for wildfires.

"So, there's no incentive for states to step up and encourage more use of fires," said Peterson. "This is a very big roadblock."

All of these factors are combining to encourage more frequent and bigger fires, and greater air pollution risks.

Dr. Harold Farber, a pediatric pulmonologist at Texas Children's Hospital, warned of the "toxic products" released with all the combustion.

A store of toxic pesticides went up in flames during a California wildfire last month. Herbicides and insecticides sprayed on forests may also become re-suspended in the air, although research suggests that concentrations would be well below levels that pose known health risks.

Some experts also have raised concern over heavy metals, including lead and mercury, as evidence points to the potential for fires to unleash the sequestered metals and redistribute them over great distances.

If volatilized mercury lands in a lake, for example, it may accumulate in fish and pose a concern for human health.

Then there's isocyanic acid, a potentially toxic compound found in both cigarette smoke and wildfire smoke that researchers are just now beginning to understand. Another more well-known pollutant produced by wildfires: lung-irritating ozone.

"The bigger picture is that we don't know how all these things work together," said Bob Yokelson, a wildfire expert at the University of Montana. "In pure form, a pollutant may not cause damage at these levels, but mixed together they might."

Still, the experts who spoke with HuffPost agreed that the fine particulate matter from wildfires is most concerning.

"Any increase in [particulate matter] increases the health impact," said Michael Bauer, a professor of population and public health at The University of British Columbia. And this particulate matter, he added, can travel hundreds, if not thousands of miles.

Bauer's research has found that smoke from landscape fires, including wildfires, results in 339,000 annual deaths worldwide.

Farber recalled his asthma patients suffering extra breathing trouble when wildfires engulfed swaths of Texas in September 2011. He said he also is worried about other potential short-term and long-term health issues associated with the natural disasters, including injuries to the heart and increased risks of pneumonia and cancer.

Kids, pregnant women, people over the age of 65 and those with underlying respiratory or heart conditions would be most at risk.

Animals suffer as well, and can provide clues for human health effects. Small, of Chelan-Douglas Health District, had two parakeets before the wildfires struck last fall. The birds' cage, she recalled, was situated close to a doggy door in her house.

"The older one died right at the beginning" of the fire, she said. "Birds can provide one of the first telltale signs of really bad air."

Despite her own asthma from living with smoking parents growing up, Small managed to guard her health during the smoky month by using HEPA air filters, avoiding the outdoors and wearing a face mask when she did venture out.

The Washington State Department of Health distributed 53,000 respirator masks during the event, and rolled out webpages full of answers and advice for worried residents.

Before Cashmere's Vale Elementary School reopened, officials had built a double-door entry out of plastic sheeting.

"You shut the door. And it’s all HEPA filter-cleansed air in this small area," principal Sean McKenna told Northwest Public Radio. "And then you open a zipper. And that allows you into the building."

Many lessons were learned last year that will inevitably be put to use again, noted Small.

"This used to be something that we looked at as an isolated event," said Brauer of severe wildfires. "Now, some communities are getting hit every year. We don't know the impact of those long-term repeated exposures."