I am a survivor of this week's ongoing Valley Wildfire in Lake County, California, a beautiful place that my family has called home since 1935. My childhood house and another we owned were among the very first of over 1,000 structures to burn, most of them the homes of families. Needless to say, this holocaust has been one of the most devastating experiences of my life, and it has been even worse for countless other people who have lost pets and their livelihoods as well. 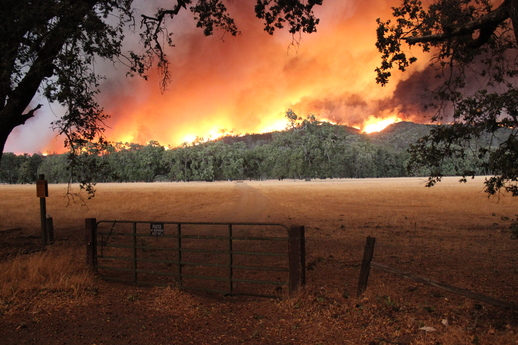 As a Roman Catholic theologian I strive to articulate the Christian faith across the spectrum of human experience -- good, bad, and indifferent. I have not yet found an even remotely coherent way to read the "will of God" into this fire which has possibly killed four people, left thousands without homes or possessions, and caused unspeakable grief to tens of thousands of families, relatives and friends.

I first rushed to the fire on Saturday to see whether I could protect my home using a high pressure water pump, hundreds of feet of fire hose, and 17,000 gallons of stored water. This was a rational decision considering that only six days before -- on Labor Day -- we in Cobb Valley had experienced a fire about a half mile north that was contained at less than an acre.

Last Saturday, the first Calfire post I read on Twitter estimated the fire to be about two acres in extent with a moderate rate of spread. What no one anticipated was that the conflagration would quickly expand driven by a ferocious wind gusting at 40 miles per hour.

It soon burned so hotly that a Helitack strike crew dropped in front of our own gate became trapped, quickly had to deploy their emergency shelters, and were seriously burned and airlifted to a burn center. The fire rushed up our hill, took our two homes, and then climbed up over mountains and down into valleys, burning hundreds more structures over succeeding days.

I never made it to the fire. By the time I arrived in the vicinity the highway patrol had made a hard closure of Bottle Rock Road, allowing no one through. So I waited anxiously in the rural community of Anderson Springs, and seeing a need I offered to water down the home of a couple I did not know, so as to buy them a few precious moments to rescue a handful of their most cherished possessions.

Over the next two hours, we watched in horror as a wall of flame half a mile wide and a hundred feet high raced down the mountain toward us. I could feel the radiant heat on my hands and face from a mile away. Down the valley a spot fire erupted along our escape route, but it was doused by a retardant drop from a DC10.

Finally, at 6:00 p.m., the deputy sheriff drove through the community, his loudspeaker ordering any of us who remained to "evacuate now or risk losing your lives." (Sadly, it appears that two lives were indeed lost along the winding roads of Anderson Springs.)

This wild fire offered me some important lessons in human nature. On the first night of the fire, I was ridiculed by two "friends" for trying to save our home. But since that awful day, I have encountered thousands of Facebook angels.

One person I've known for years made a quick transformation -- I joked that he used "instant asshole spray" -- questioning me as to why I had risked my life to help water down the home of an Anderson Springs couple I did not know simply so they could try to rescue a few possessions.

Another (a former graduate student of mine) called me "stupid" for going to see if I could defend my family home from what was initially reported to be a "small fire" threatening my property. How, at the time. was I to know that this fire was any more serious than the three-quarters acre fire of six days prior?

If you call me stupid or if you question my motivation -- or those of any of my Cobb and Middletown friends and neighbors -- I have no wish to interact further with such a toxic person. It's the same reaction I would expect if I called someone "stupid" for trying to rescue a dog from a hurricane or grab a precious photo album before a tornado. (OK -- maybe deliberately paddling out to surf hurricane waves is a dumb idea!)

If you haven't been in a fire zone yourself, you have no informed way to judge whether something at the time was possible or impossible, or whether it was a reasonable or an unreasonable course of action. If you were not in Cobb yourself, you have no idea how quickly an apparently safe neighborhood could become a hellish firestorm. You are in no position to judge whether something a Cobb Valley resident did under these circumstances was responsible or irresponsible, was conscientious or not.

If you were not there, you should do exactly what I would do if I were tempted to judge the actions and split-second decisions and mistakes made by tornado or hurricane or earthquake survivors. It's rather simple: If in your ignorance your impulse is to rush to judge a disaster victim, remember to keep your mouth shut!

In stark and splendid contrast to this negativity, I have received and read literally hundreds of messages from friends and total strangers, in a spontaneous outpouring of love and support I have never in my life experienced. These are the "angels" -- people I've known for years, people I've met only through this devastating experience, and people I may well never meet.

As a theologian, I do not in any facile or simple-minded way discern the "mind" or "will" of God visible in this terrible fire and its capricious behavior. I may never be able to understand the "purpose" behind God "allowing" this tragedy. I may never in my life organize and articulate such a relentlessly grinding disaster into any coherent and rational framework that makes sense.

But of one thing I remain absolutely convinced: In the loving, gentle, compassionate, nonjudgmental and open-handed support of thousands of people -- on the fire lines, in evacuation shelters, in relief distribution centers, at hospitals, and in Facebook support groups -- I see quietly revealed the hands and heart and spirit of the Being some of us call "God."