The high on Jan. 23 was 1 degree Fahrenheit. It was the second day of winter tracking for The Nature Conservancy's Adirondack Chapter. No matter the temperature, identifying animals by their prints is as much art as science. Context matters and a host of clues -- from surrounding trees and shrubs to scat left behind -- must be considered. Trail cameras, which collect data 24 hours a day, can be useful aids for observing animals.

Cold is a given in this part of the world, and is easy to deal with if one has the right clothing and equipment. Other factors, however, have made the days somewhat marginal this winter for wildlife tracking in the Adirondacks of New York -- erratic temperatures and limited, patchy snowfall. Even in the best of conditions fresh tracks can quickly deteriorate, losing definition under the heat of the sun or getting swept by wind. The camera that captured these critters is supplementing the Conservancy's data collection in an area identified as an important "land bridge" for wildlife to move between New York's Adirondacks and Vermont's Green Mountains. The focus of the work is not deep within the forest, but along roads.

Many of the same roads that connect people -- to friends, family, businesses, schools -- by allowing vehicles to drive from place to place can have the opposite effect on wildlife. They can serve as a barrier and isolate different populations of wildlife from each other, leaving animals susceptible to genetic declines over time. There are steps highway departments can take to minimize risks to motorists and wildlife in some situations. A culvert that makes it safe for drivers to cross a stream, for instance, can also make it safe for wildlife to cross under the road rather than over it. Knowing where the crossing hot-spots are, in combination with natural forest cover, development encroachment, and the habits of bobcats and other animals is a way to bring wildlife data into transportation planning.

At one particular site a couple of years ago, we would often see mink tracks going through a culvert to the other side. On a day when the culvert was buried in snow, we watched a mink approach and look for the opening. Because it was blocked, the animal turned away and was forced to cross up and over the road. It was valuable to see how certain roadside features can play such a strong role in influencing an animal's movement and potential safety.

Ultimately, the aim is to maintain or improve "habitat connectivity" -- a term conservationists use to refer to land and water links that allow fish and wildlife to move safely from habitat to habitat -- without being run over by a car or caught in a dry culvert. Maintaining and improving habitat connectivity is a key conservation strategy for The Nature Conservancy as we look at ecological issues across large landscapes, such as the Adirondacks and the Northern Forest.

Learn more about this work and how it fits into a larger initiative across the northern forest: 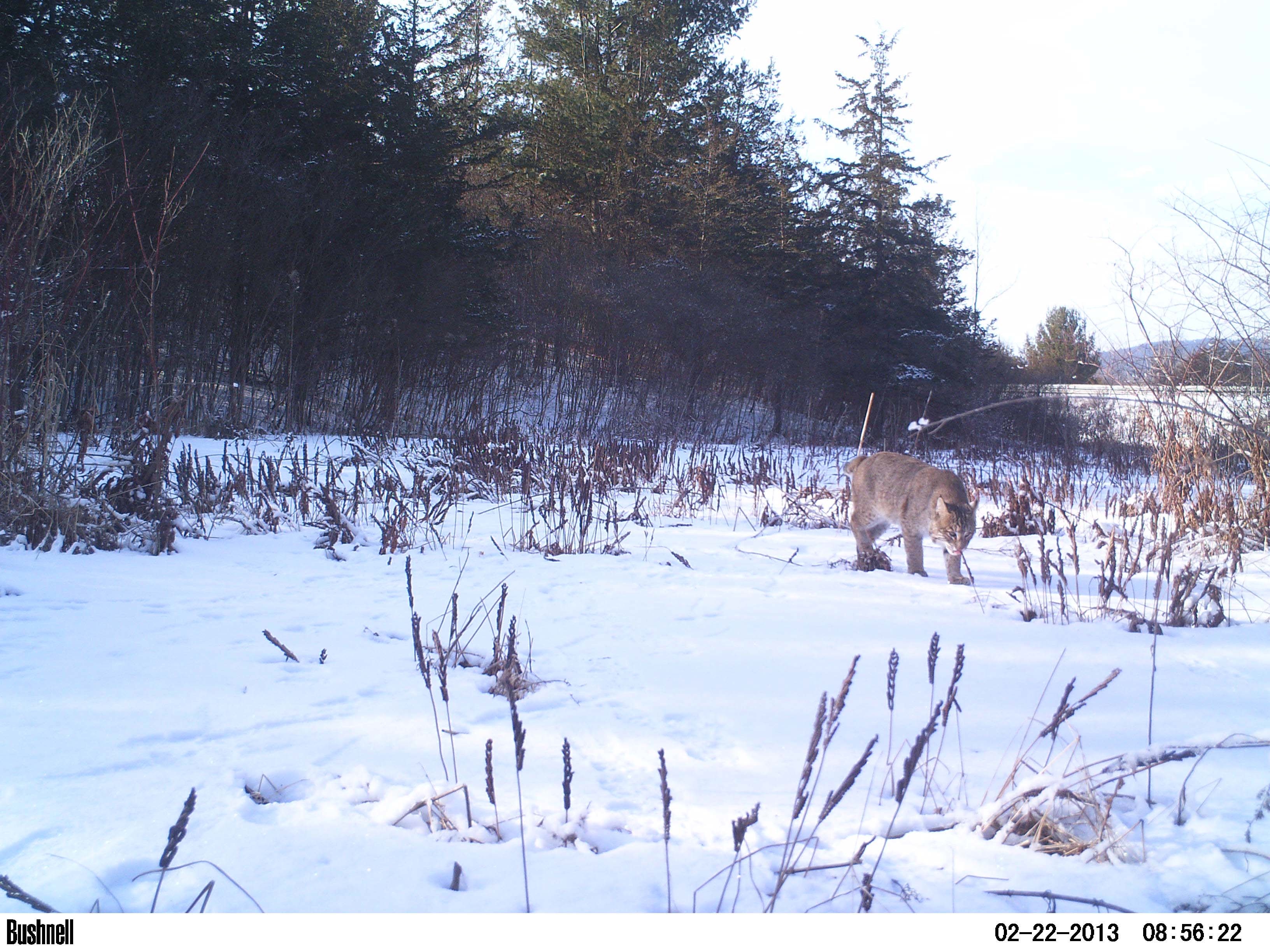 Bobcat caught on a motion-detecting camera within an important wildlife crossing area. Field technicians decided to put the camera up after repeatedly seeing tracks in the same location and captured this image within the first week. 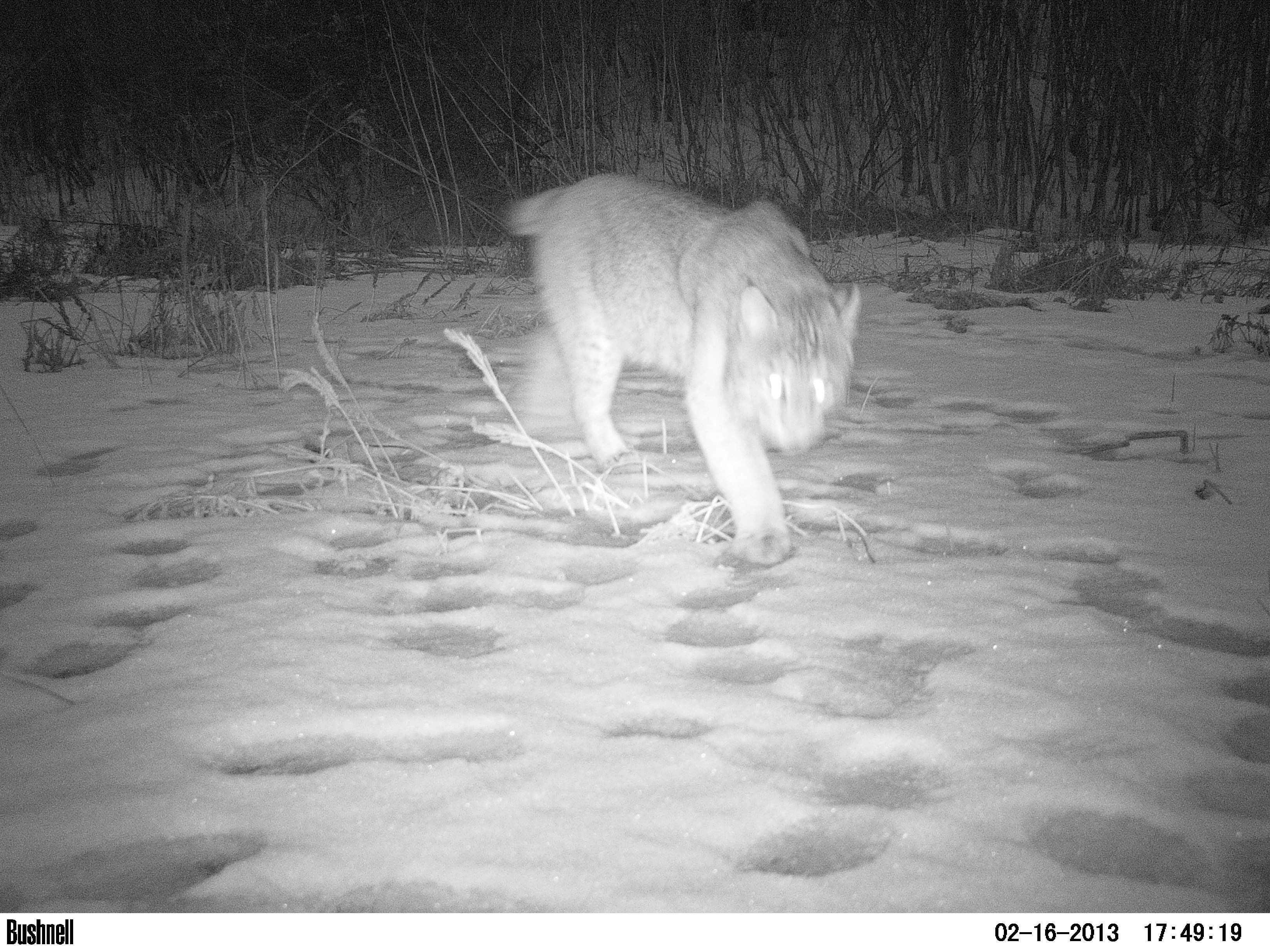 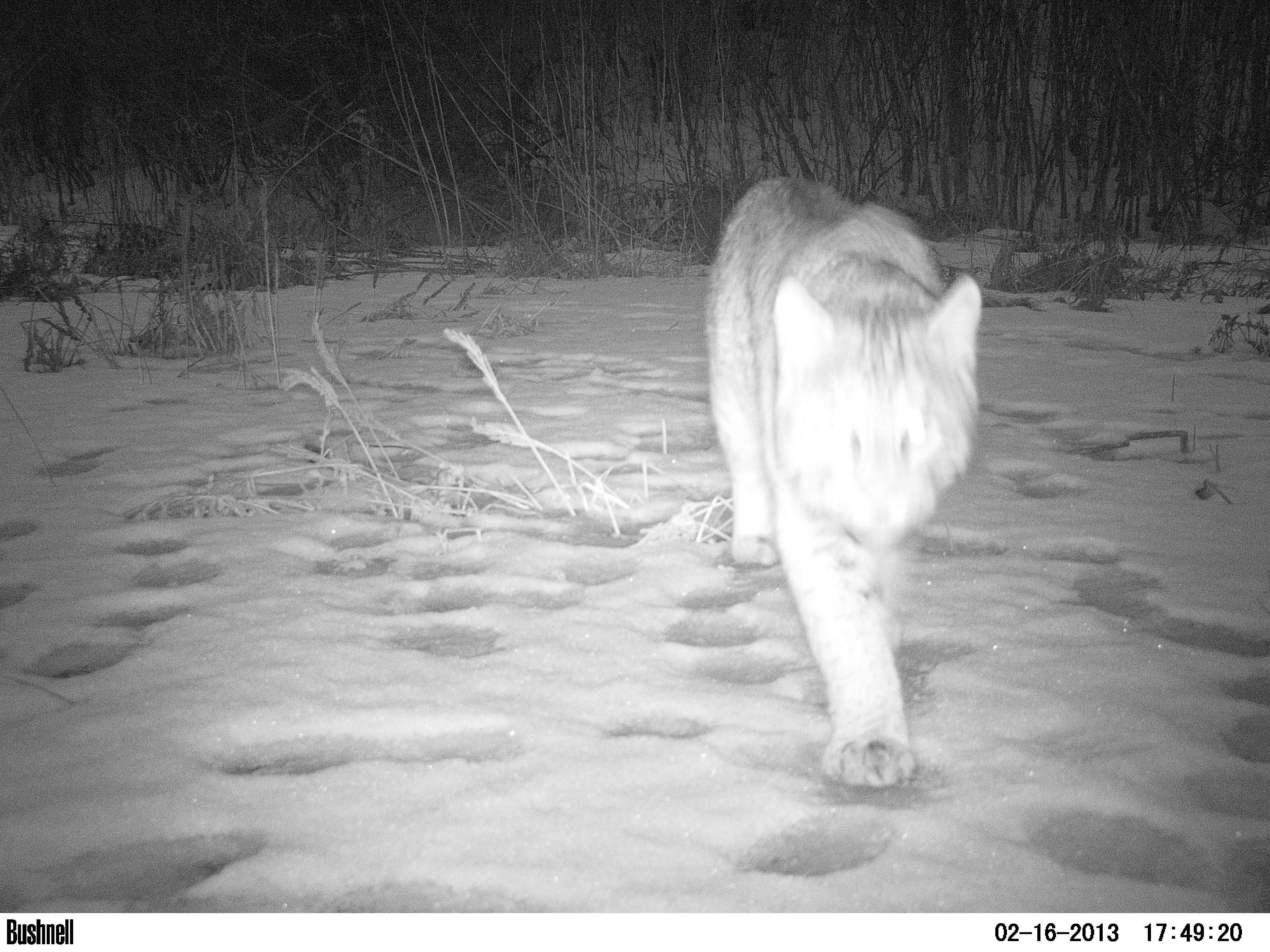 Bobcats, named for their short, bobbed tail, spend about 75-80 percent of their time moving, resting only two to three hours at any one rest site. The species is making a remarkable recovery after suffering local extinctions in the last century from habitat loss and over hunting. 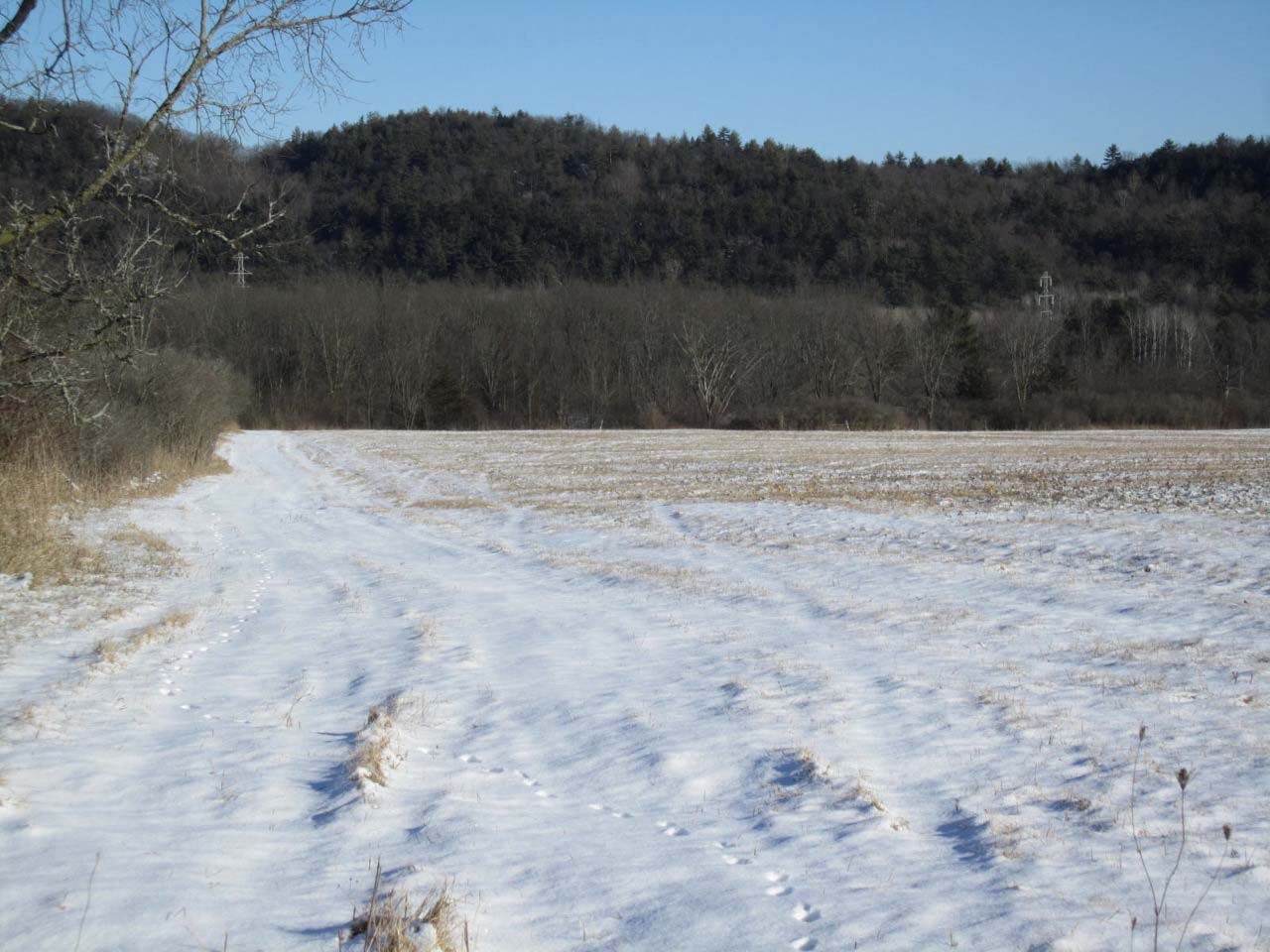 Tracks of a coyote show how the animal is using the cover of an adjacent hedgerow to cross an open field. Maintaining hedgerows can be important considerations for land-use planning. 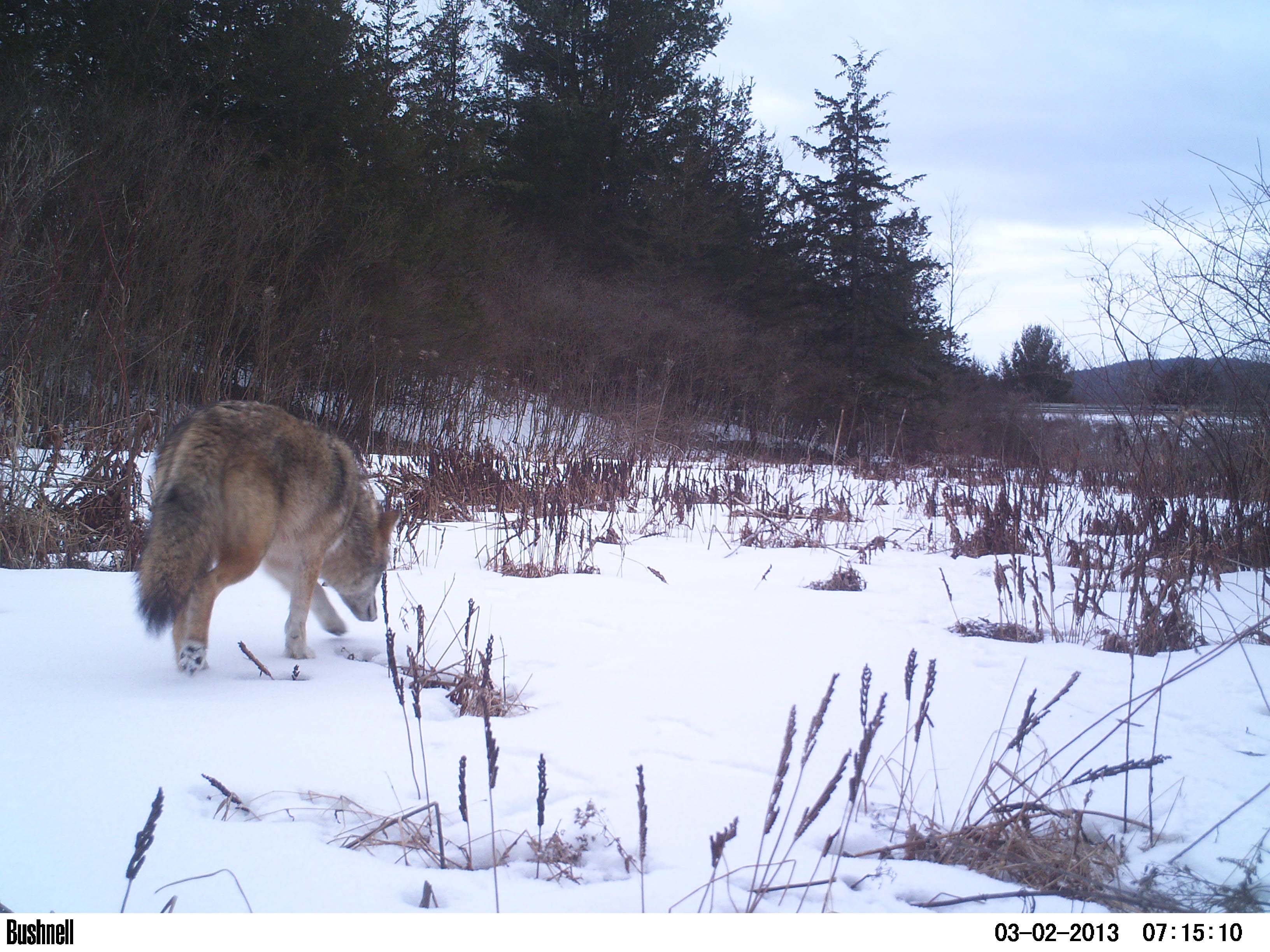 This coyote's paw pad gives a good indication of the print the animal leaves behind in the snow. 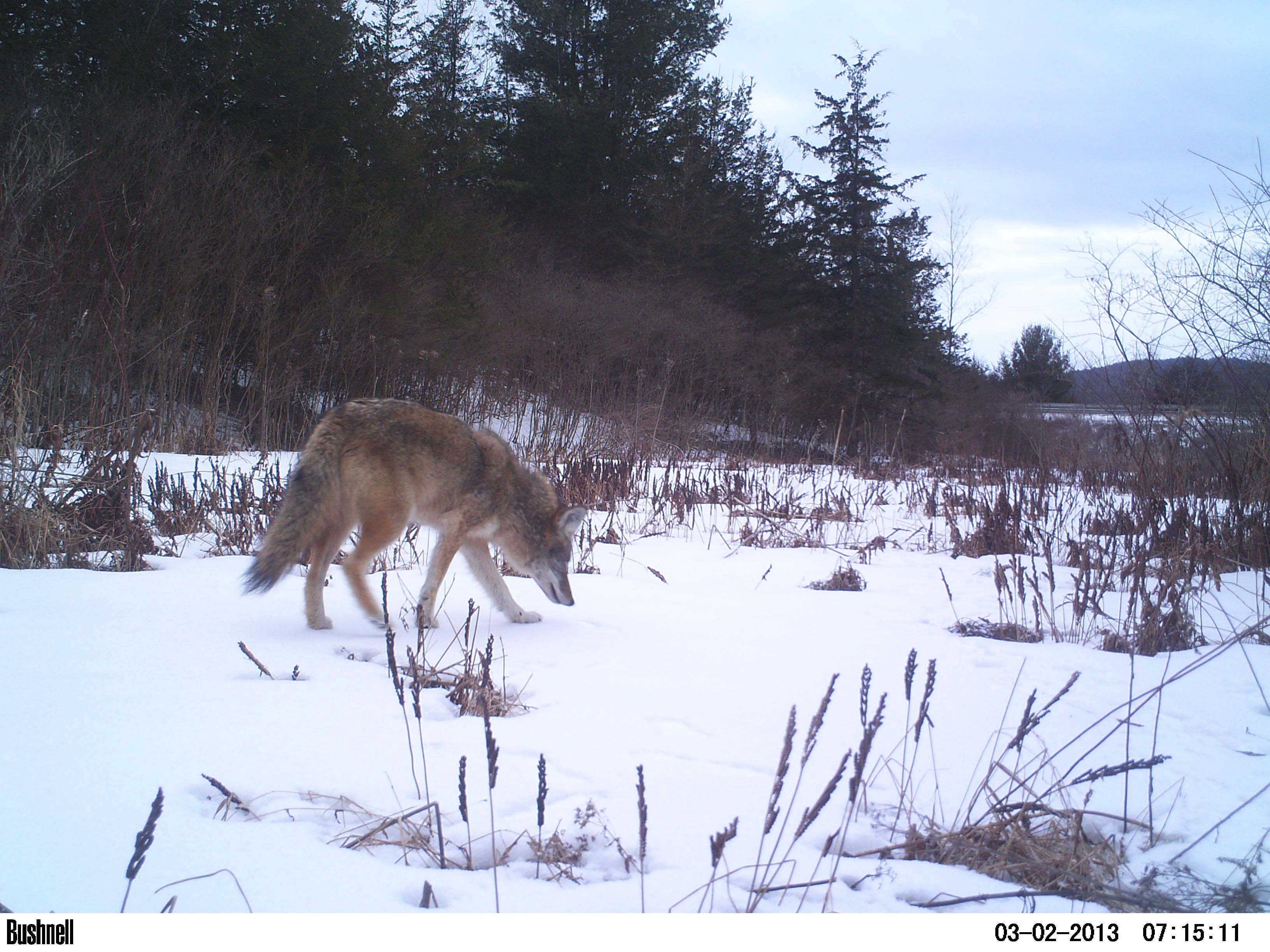 Coyotes will often use the same travel routes for weeks or months throughout the year, and may travel up to ten miles in the course of one day. 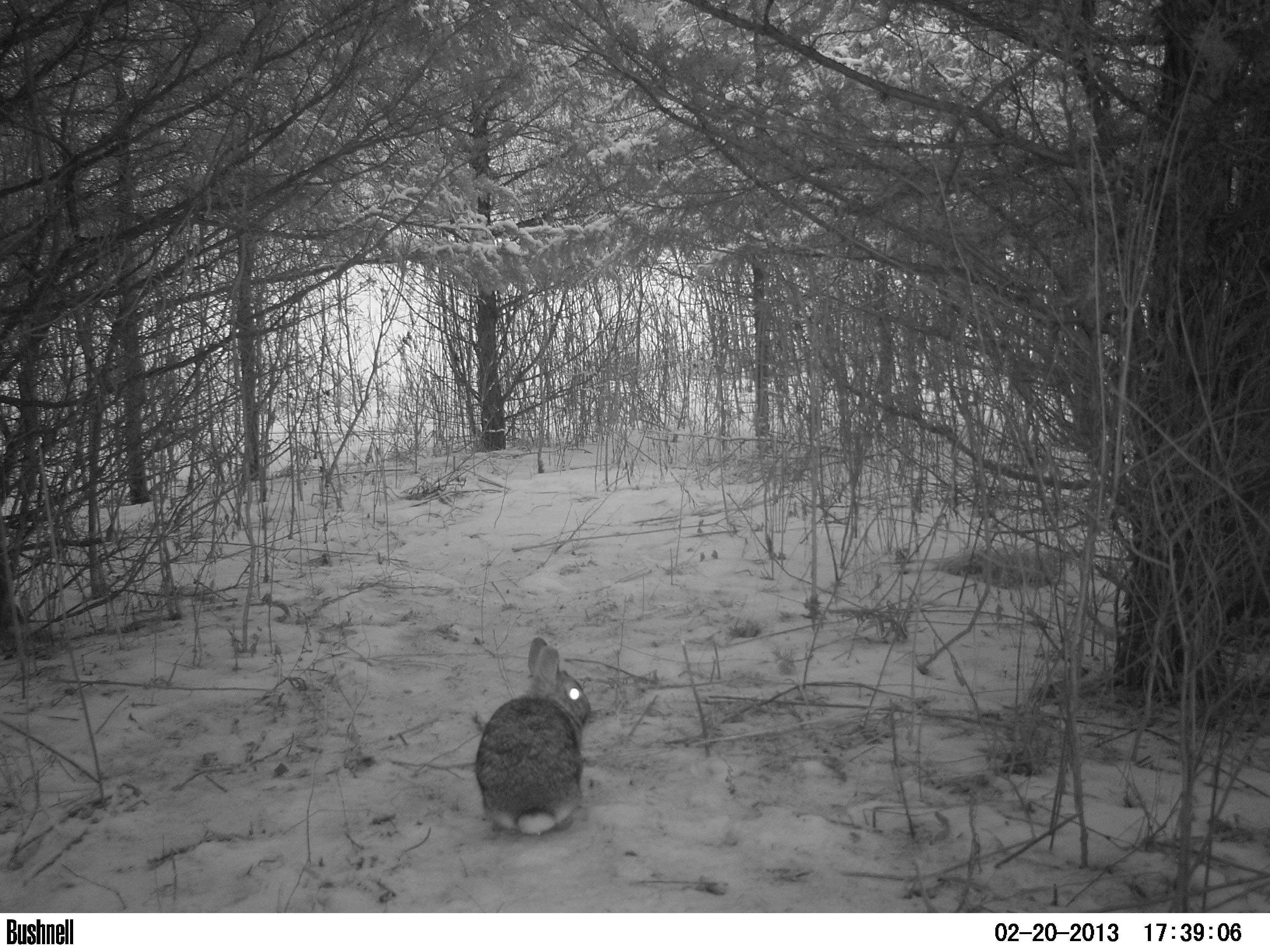 While our research focuses on large, wide-ranging predators, it's clear that many of the same locations attract a wide variety of animals, including this rabbit.