2013 revealed a promising new political trend: A renewed interest in listening, connection and acknowledgment of gray areas to spur innovation and possibility. It's not surprising that activists, leaders and organizations would respond to the dysfunction of the federal government by exploring ideas and practices to resolve conflicts and develop common ground.

No one understands the challenges of conflict more than Planned Parenthood, so it makes sense that they stepped out early. Last January, Planned Parenthood made a major announcement acknowledging that Americans' views on abortion weren't so cut and dry. Their willingness to adopt the gray area so proudly and publicly signaled potential for a major shift in the abortion conversation.

Less than a year later, they are less alone in their approach. More and more public figures are advocating for better ways of dealing with our differences.

In a fall TEDTalk, Sally Kohn, the liberal pundit formerly of Fox News, spoke about a concept she calls emotional correctness: "You can't get anyone to agree with you if you don't listen to them first... we spend so much time talking past each other and not enough time talking through our disagreements."

Philanthropy publicly embraced the idea of building bridges across divides this year too. The Board of the William and Flora Hewlett Foundation announced a new initiative, which will "zero in on the problem of political polarization. We believe... that alleviating polarization is a precondition for successfully addressing the other problems that bedevil us."

This desire to try something beyond fighting is happening on the local level too.

I live in the Bay Area where the makeup of our communities is shifting so rapidly that it's hard to keep up. Just two years ago, we were a powerful base for the Occupy movement. Now we are a living demonstration of the disastrous impact of increasing economic inequality. Recently, one of the infamous Google busses was surrounded by activists who were protesting gentrification. Much debate ensued.

The complexity of gentrification in San Francisco, noted local self-described techie-activist David Taylor, creates a situation where the question of "which side are you on" doesn't really apply. The complex web of economy, technology, transportation, environment, racism and poverty mean there are many sides to many stories. Instead of sides, he offers advice on how to come together, telling Google employees to "understand your privilege and think about how you can use it to help those less fortunate than you, which may mean not demonizing these folks, even if they are demonizing you;" while asking activists not to "spit on all the tech workers and assume they created this whole situation by getting a job as code monkeys, but consider them your potential allies in getting us out of this mess."

Given this trend, I can't imagine a better time to release photos of President Obama with former President Bush onboard Air Force One, as they honored the life and leadership of Nelson Mandela. The images of former rivals traveling and sharing meals together, along with their families, was a nod to Mandela's collaborative legacy as well as a response to our nation's need to witness connections amongst our elected leaders.

I wonder, though, whether we have the guts to make the kind of commitment to forgiveness and cooperation with former enemies that Mandela supported?

Exhale, the organization I lead, has been practicing a nonviolent framework for social change called pro-voice for more than a decade. We're a community of people who've experienced abortion, along with our allies, but we take no political position on abortion. Never have. Given that our community is on all sides of the issue (yes, pro-choice and pro-life people have abortions) we don't want to further divide ourselves by contributing to more polarization. We focus on transforming the conflict entirely. Our leaders show that it's possible to nurture empathy and human connection in the midst of increasing hostility. 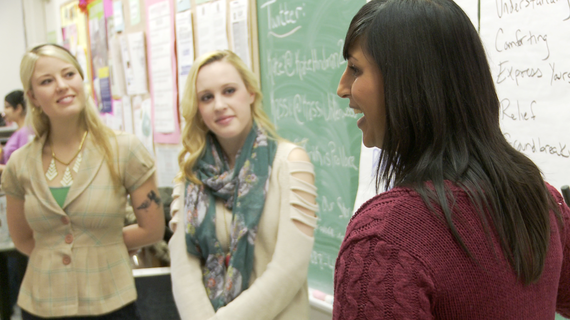 Polarization is so dominant that it's easy to overlook critical stories like ours of change and opportunity. The storytellers we work with at Exhale have walked into classrooms and churches to tell their personal abortion stories. By listening to their audiences, being curious about their values and beliefs and by acknowledging abortion's gray areas, the storytellers show respect, opening the door to respectful engagement with all kinds of people, from all kinds of backgrounds and political beliefs. Even in Texas.

This shouldn't be an anomaly. It should be the expectation we consistently have for one another. Our problems are too serious and complex to let dysfunction rule.

In 2014, let's do what it takes to make this political trend stick. Let's support the nascent efforts of social and political entrepreneurs like Planned Parenthood, Sally Kohn, the Hewlett Foundation, and the citizens of San Francisco. Whether you are a digital activist, journalist, philanthropist, or a regular person who just wants better for your country, we all have a role in reducing politicization and building more respect.

•Listen first to understand, instead of talking past each other to make a point.
•Be curious and nonjudgmental about people who have a different experience than your own (whether it's abortion or gentrification or any other topic).
•Notice and investigate what's possible when the rhetoric gets toned down.
•Let go of the desire to demonize opponents even if under attack.

If we can commit to this pro-voice approach, the question of "which side are you on?" will become less relevant, opening new opportunities for the kind of creative problem solving that America so desperately needs. Let's lead by example and show the federal government what kind of behavior we expect from them.