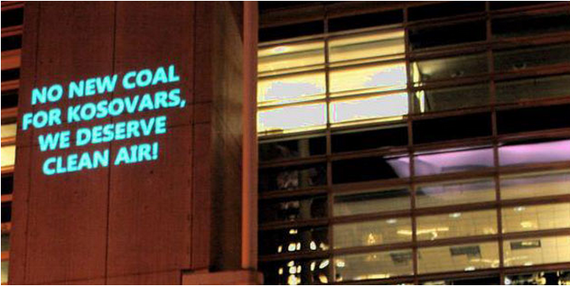 For the fourth year in a row, the World Bank's investments are coal-free. But the real test of the strength of this commitment will come when the bank decides whether or not to fund the Kosovo C coal-fired power plant in Kosovo.

Currently, Kosovo relies on two old and extremely dirty coal-fired plants for most of its electricity. One of these plants recently exploded, leaving the country to rely on even more imported energy. In light of this disaster, the Kosovar government -- and the World Bank -- are hinging all of their hopes on the proposed Kosovo C coal-fired power plant to quell this seemingly endless energy import and finally meet the Kosovars' growing energy needs.

But what the World Bank is failing to realize is that the solution to Kosovo's energy crisis cannot be found in outdated, dangerous energy supplies like coal. By turning to a modern 21st century energy plan -- including energy efficiency, wind, and solar -- Kosovo will be able to easily meet its growing energy demands, protect the health of its people and environment, and subsequently drive growth in the country.

Currently, nearly one-third of the nation's energy is wasted on an antiquated and inefficient transformer fleet and energy grid. The proposed Kosovo C coal-fired power plant will not only continue to perpetuate the use of this outdated system, but it will lock the country into using lignite coal -- the dirtiest type of coal -- for at least the next several decades.

By increasing energy efficiency and transitioning to clean energy sources over time, this waste will be drastically reduced and, in turn, will save countless lives and much-needed money. On top of that, by reducing and eventually eliminating the use of lignite coal, the country will be in a better position to ensure a safer, healthier future for its people.

Luckily, many local groups have already taken up this fight.

As we speak, the Kosovo Civil Society Consortium for Sustainable Development (KOSID) and their allies are protesting energy rate hikes approaching 10 percent, which is on top of several rate hikes that have come in the years before.

But how can Kosovars afford a new coal-fired power plant? The answer is they can't.

The Kosovo C coal-fired power plant is estimated to cost approximately $1 billion of the country's $6.9 billion annual gross domestic product. So, where is this money coming from? You guessed it: from the pockets of Kosovars.

Already, some estimates are predicting more than a 40 percent increase in energy bills for Kosovars in order to offset the cost. And that's before construction has even started. This is more than the people of Kosovo should have to pay for energy, particularly when clean energy solutions will not only lower energy bills but health-related costs as well. Investments in energy efficiency and clean energy could solve Kosovo's energy crisis for a fraction of a price -- which is something the World Bank, as the world's foremost multilateral development bank, should be in the market for.

As the decision to fund the Kosovo C coal-fired power plant looms ahead, the world will be watching to see if the World Bank is truly committed to ending coal financing or if it will stain its impeccable record and ignore the commonsense clean energy solutions already available.

Kosovo is the question. The World Bank now has to answer.