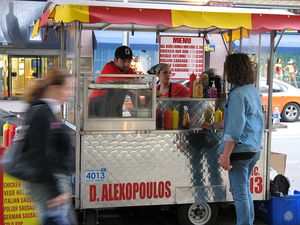 As robots and other automated technologies have become more mainstream, there has been a growing number of suggestions that robots are going to destroy our jobs and leave humanity in a parlous state.

For instance, the BBC recently offered a tool whereby you could search for a job and find out the probability of it being automated. The tool was based on some research from academics at Oxford University into the future of employment.

Suffice to say, the tool provoked a lot of reaction, most of it of the emotive kind. Indeed, it's a common feature for discussions around our job prospects in the face of automation to focus purely on the work that's lost rather than the work that's gained.

A nice analogy to bare in mind therefore might be that of the hotdog stand first shared by economist Paul Krugman back in 1997 in Slate.

It tells the story of a company running a hotdog van. Each van requires three jobs to be performed:

So work at the company has to fit into one of these three roles. But then a machine comes along and automates one of the roles (say the preparation of the sausage). The machine can do that task quicker and cheaper than the human can, so rationally, the company decides to automate that job.

If we only stop there, we might understandably assume that all the sausage preparers are thus out of work and that automation has been bad news all around. Alas, things aren't quite so simple.

In both of those scenarios, wages are suppressed, either in the role that's automated or the other roles at the company.

There is, of course, a happier potential outcome that often gets overlooked. Now, as the preparation of the sausages is more efficient, the cost of producing each hotdog is reduced, which means that the company could sell them for less money.

Providing that the market for hotdogs is price sensitive, this could result in many more people thus wanting, and being able, to buy a hotdog. This scenario would increase the work required of the other two functions as more hotdogs would need to be made, so there is likely to be an increase in jobs in both of those fields.

It's feasible therefore, that not only is there no net loss in jobs, but there may even be an increase. So the next question would appear to be, which of these is more likely?

Well, a study I wrote about recently suggests that the job creation scenario is infinitely more common.

The study saw over 300 occupations examined over a 33 year time-scale from 1980 to try and examine the impact of automation. To put it bluntly, it emerged that employment generally rose fastest in professions with the most automation.

"The idea that automation kills jobs isn't true historically, and if you look at the last 30 years, it's not true then either," the author says. "Right now, the best thing that can happen to you is to get some automation to do your job better."

So maybe things aren't quite as glum as some would make out.