Who knew this would be such a fruitful TV year for sad clowns?

Think it could be related to El Nino?

Will Arnett's new Flaked, which drops Friday on Netflix, is comedy playing off against a story that's deeply melancholy. 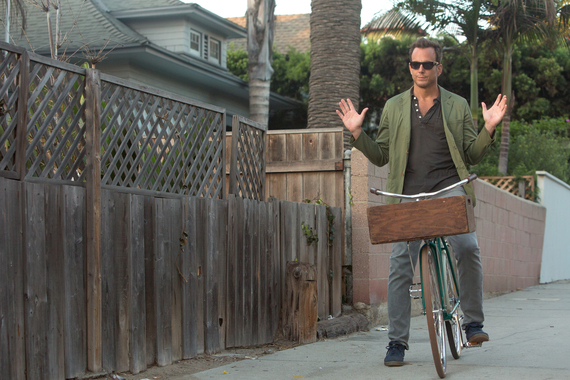 It's the kind of show where viewers, even the ones looking for Will Arnett laughs, may soon find themselves more engaged in the disquieting story of restless lives than in the droll comedy those lives often inspire.

Arnett plays Chip, a middle-aged resident of Venice, Calif., which we are quickly reminded has become a refuge for people who are outwardly quirky and inwardly fragile.

Chip runs a furniture store, which specializes in stools. He lives in a small nearby apartment, next door to his best friend Dennis (David Sullivan). He rides his bicycle everywhere, and he has just started to date a girl named Kara (Lina Esco).

It's a small life, in the current parlance, and that would be okay if it weren't for the backstory on why it's small.

Ten years ago, Chip hit and killed a man while driving drunk. That's why the state of California only allows him to ride a bicycle. He accepts that, as he welcomes all penance. He has rebuilt his life around the world and the culture of AA meetings, where he still apologizes for the mistake he can never take back.

Chip fears romantic relationships. He clings fiercely to his shop, which he has made into his safe place. 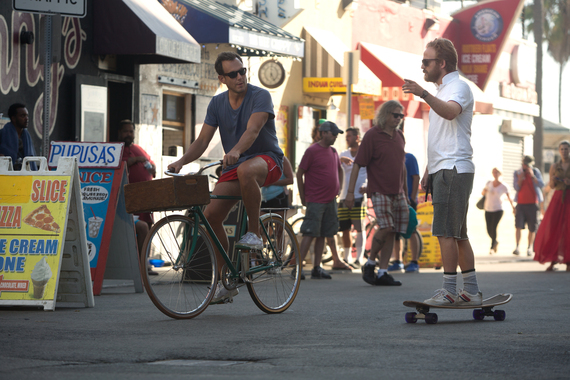 He doesn't present himself to the world as a frightened bird. He's reasonably social and he routinely jokes around with Dennis, often in a kind of straight-faced Seinfeldian vernacular. They debate, for instance, how many outings you're allowed with one girl before you have to call it a date.

He's not fooling us, nor is he trying to. He's a damaged unit who doesn't like himself very much, feels awkward with others and when no one's looking will still take a drink.

Nor, it should be quickly added, are his friends any more grounded. Dennis is a neurotic who can't sustain a relationship outside of his dogs and with every move illustrates why. Their friend Topher (Christopher Mintz-Plasse) is a standup comedian and community activist who seems to have been imported from 1967.

Cruising around town on their bikes and skateboards, they could be junior high students heading for the video arcade. That produces a regular stream of jokes and one-liners, but can't camouflage the fact their lives at this point should be more.

The jokes work reasonably well because the show isn't written to the jokes. They feel like they fit the characters. Stefan's shop, for instance, is called Free Coffee, which only means it's free of additives. It costs $4.50 a cup. Topher talks about the perfect wife being one from whom you get an amicable divorce after 15 years. 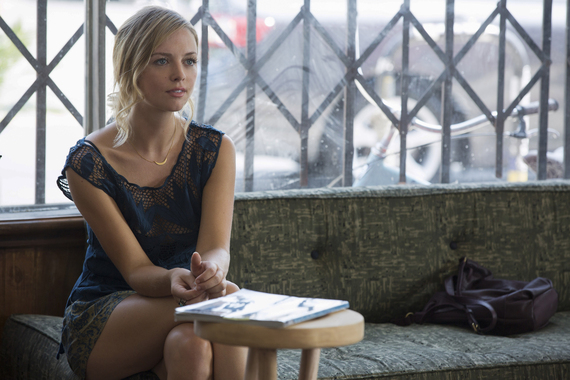 All these quirks and backstories come together with the entry of London (Ruth Kearney), above, a waitress who just arrived in Venice and immediately rockets to the top of Dennis's want list.

Trouble is, she's a little more intrigued by Chip than by Dennis, which launches an awkward rom-com dance in which Chip publicly encourages Dennis to make his moves while privately wrestling with his suspicion that he'd like to make those moves himself.

Kearney plays the middle nicely. But it's no shock that she turns out to be a bit scattered and wistful herself.

We don't mind these characters trying to make us laugh. We'd be happier if they'd find ways to heal some of what's gone wrong in their own lives.

Alongside You're the Worst and Baskets over on FX, Flaked gives the sad clown an unusually robust TV profile these days. That's not entirely a sad thing.