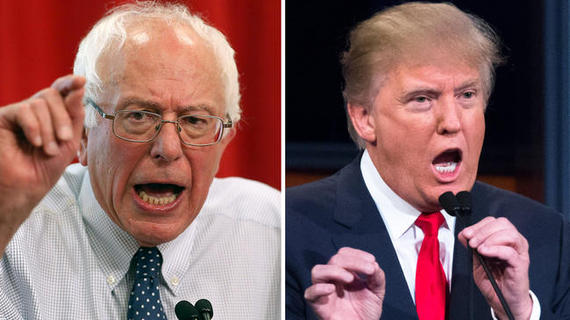 Senator Bernie Sanders (D-Vt.) has no sympathy for Donald J. Trump, the presumptive Republican nominee for President of the United States in 2016. Sanders makes no secret of despising Trump's message and style. Campaigning for the 2016 Democratic presidential nomination on a platform of progressive liberalism inspiring throngs of young people and disillusioned working-class Democrats, Sanders consistently blasts Trump for his braggadocio, his insults against immigrants, women, and minorities, and his rowdy, often-violent campaign rallies.

Personally, the two could not be more different: Trump the arch-capitalist billionaire with his opulent lifestyle, TV reality show, and fashion model wife, versus Sanders the democratic-socialist with his long career of public service, Brooklyn accent, and modest net worth. Sanders insists that, should he lose the Democratic presidential nomination to his rival, former Senator and Secretary of State Hillary Clinton, he will back her to the hilt against Trump and urge supporters to do the same. And no one doubts his sincerity on this.

But the equation may not be so simple. Sanders has won over 9.2 million votes in primary elections so far this year. But will these voters follow him in backing Clinton as the nominee? Or, in the pinch, will a critical mass defect to Donald Trump, perhaps giving Trump the winning margin to capture the White House in 2016?

The very question is steeped in irony. But scratch the surface, even slightly, and the picture starts to blur. Strip away Trump's coarseness, his apparent racism, xenophobia and sexism, the insults and shallowness -- the things Sanders and most progressives find infuriating -- and parallels appear:

• Sanders and Trump both have based their appeal on tell-it-like-it-is integrity, portraying themselves as outsiders, "change" candidates ready to shake up Washington;

• They both attack Hillary Clinton, their common adversary, as the embodiment of corrupt, old-school establishment politics, accusing her of winning her party's nomination through a rigged system of super-delegates and favoritism;

• Both complain about how big-money elites dominate politics, using massive campaign contributions to buy influence and promote greedy interests. Trump brags how, before becoming a candidate, he used the system himself as a businessman to buy politicians, but now is self-funding his campaign to avoid owing favors. Sanders, for his part, rails against the Citizens United Supreme Court case and accuses "the billionaire class" of wrecking the country;

• Sanders and Trump both oppose trade deals like NAFTA and TPP which they blame for destroying American jobs;

• Both take credit for opposing the Iraq War, and claim they want to limit American military engagements overseas, though for Trump only after quickly bombing the **** out of ISIS.

Even their weaknesses are similar. Style aside, Sanders and Trump both are routinely criticized for proposing vague, pie-in-the-sky solutions whose cost numbers never quite add up: Trump in the form of unrealistically large tax cuts, Sanders in the form of free college education, universal health care, and the rest.

Many Sanders voters, particularly unemployed young people and blue-collar workers still suffering the loss of manufacturing jobs and lingering effects of the 2008 fiscal crisis and housing collapse, still bitter at Washington for letting them down, flocked to Sanders originally precisely because of his willingness break the mold. For them, having backed one protest candidate in Sanders, is it no big leap to think they won't back another in Trump -- especially against their common adversary Hillary Clinton.

Trump is counting on this possibility. "I think a lot of the young people that are with Bernie Sanders will come over to my side because they want jobs," he told Fox News anchor Sean Hannity within hours of securing the Republican nomination by decisively winning the Indiana primary this past Tuesday, May 3. "I would rather run against Crooked Hillary Clinton than Bernie Sanders," he tweeted that same night, "and that will happen because the books are cooked against Bernie!"

Trump may insult Sanders personally as a "socialist," but he now routinely quotes Sanders in his anti-Hillary attacks, sympathizes within him for being hustled out of a rigged nomination, and shows every intention of courting his supporters. And Sanders's current plans play right into this scenario. By continuing to fight and win primaries -- as he has every right to do -- he exposes Clinton for her sheer weakness, her inability either to make a deal to win him over or beat him definitively with votes.

Bernie Standers still has the chance, by playing his cards skillfully, of transforming his extraordinary success in the 2016 primaries into a lasting positive force in Democratic politics, building his progressive vision into the party platform and launching a new generation of sympathetic leaders. But time is rapidly running out for this, and Sanders must adjust soon if he is to avoid the other possible legacy, that of an over-extended gadfly who let his ego get in the way and managed unintentionally to put Donald Trump in the White House.