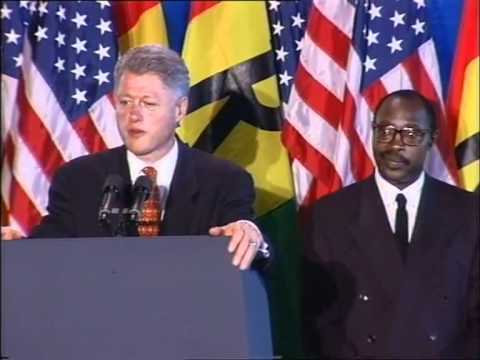 It was as much a forward looking vision as looking straight into the failures of the past when then-President Bill Clinton apologized to the people of Rwanda for not doing enough to stop the genocide. The US has had a more direct role in helping end the open conflict in Bosnia and Herzegovina (BiH) in 1995. The US and NATO also had assumed a more direct obligation, promise to the people of Srebrenica, the other "UN safe areas" and "NATO protected zones," as well as all of BiH to protect them from attack, ethnic cleansing and genocide. These promises were betrayed by a secret agreement between Paris, London and Washington to withhold allied air power even when such had been committed to by UN and NATO resolution. When Netherlands Peacekeepers in Srebrenica called for air support (on at least 6 and probably 9 separate occasions) as Serbian para-military and regulars attacked with clear intent, NATO planes remained grounded. (See: "Smoking Gun on Betrayal & Genocide".)

No such promises were made and thus not broken in Rwanda. The failure of the "international community" and the US as President Bill Clinton then defined was:

"We did not act quickly enough after the killing began. We should not have allowed the refugee camps to become safe haven for the killers. We did not immediately call these crimes by their rightful name: genocide. We cannot change the past. But we can and must do everything in our power to help you build a future without fear, and full of hope."

Dark Past but Bright Future for Rwanda?

President Bill Clinton was also firm in denying the apologists and those who would define the Rwanda genocide as outpouring of some age-old hatreds, as has become the fashion to rationalize such crimes and excuse inaction to confront the killers:

"These killings were not spontaneous or accidental. It is important that the world hear what your president just said; they were most certainly not the result of ancient tribal struggles. Indeed, these people had lived together for centuries before the events the president described began to unfold. These events grew from a policy aimed at the systematic destruction of a people. The ground for violence was carefully prepared, the airwaves poisoned with hate, casting the Tutsis as scapegoats for the problems of Rwanda, denying their humanity. All of this was done, clearly, to make it easy for otherwise reluctant people to participate in wholesale slaughter."

Looking beyond the darkness of the recent past, President Clinton saw and encouraged the replanting of the social and political institutions consistent with the roots of pluralism and multi-ethnicity:

"You have shown great vision in your efforts to create a single nation in which all citizens can live freely and securely. As you pointed out, Rwanda was a single nation before the European powers met in Berlin to carve up Africa. America stands with you, and we will continue helping the people of Rwanda to rebuild their lives and society. You spoke passionately this morning in our private meeting about the need for grassroots effort in this direction. We will deepen our support for those grassroots efforts, for the development projects, which are bridging divisions and clearing a path to a better future. We will join with you to strengthen democratic institutions, to broaden participation, to give all Rwandans a greater voice in their own governance. The challenges you face are great, but your commitment to lasting reconciliation and inclusion is firm."

Bosnia and Herzegovina Still Strangled by the Recent Past

When now former President Bill Clinton speaks in Srebrenica most citizens of BiH would like, indeed need, to hear such a forward looking message as to inclusiveness -- a country not carved up through genocide to satisfy political chauvinism and patronage that is given legitimacy through the pseudo-historic rationale of "ancient hatreds." Washington's perhaps greatest sin in BiH is that it promoted a Dayton Accords that divides BiH geographically and politically on basis of ethnicity and boundaries created by genocide, from Prijedor to Visegrad to Srebrenica, all towns engineered to be ethnically pure by mass killings of men, women and children. As bad as it is that the US and its European allies have done little, certainly nothing politically courageous to change the course of legitimizing and embedding ethnic fiefdoms since the Dayton-Paris Accords were negotiated in Dayton and signed in Paris. (France used to insist on calling it the "Paris-Dayton Accords" but now recognizes that there is little about the status quo that should be honored by the name Paris or Versailles.)

The Wizard of Oz Characters Determining Fate of Whole Populations

It appears that President Bill Clinton was persuaded by the French government to block any future NATO air support. Two French Generals managed policy on behalf of Francoise Mitterrand, who true to his Vichy roots determined policy on basis of his stereotyping of "Muslims." When President Jacques Chirac was inaugurated only a month or so earlier, General Bernard Janvier (officially UNPROFOR commander) and General Bernard de la Presle (former UNPROFOR commander) were still effectively running France's BiH policy per the inertia cultured by Mitterrand.

General de la Presle and Janvier went running to negotiate with General Ratko Mladic, who had engineered ethnic cleansing throughout vast swathes of BiH and Croatia. Mladic was the "Wicked Witch", beyond reason some assumed, but who La Presle and Janvier sought to appease by committing to cut off NATO air support including for "UN safe areas" and "NATO protected zones" as Sarajevo, Srebrenica and Zepa. (See: "New York Times" - "France Held Secret Talks with Serbs".)  Ultimately this secret deal with Mladic was adopted in another secret agreement via phone call between by the top three western leaders: French, (Chirac), UK (PM John Major) and US (Clinton). (See:  "Why Srebrenica Had to Fall".)

Many European Generals, (among them UK's Rupert Smith and France's Philippe Morillon) had evidenced both courage and vision in seeking greater resolve to confront Mladic's campaign of terror and genocide. Unfortunately though, the political European generals were at best reluctant to face down General Mladic, including a British Commander in theater General Michael Rose. I'm not certain which "Wizard of Oz" character represents these three Generals, but there was no brain, no heart and no courage.

Ratko Mladic calculated that Sarajevo was still too well defended by BiH citizen-soldiers; but Srebrenica (and Zepa), having been largely disarmed as UN safe areas,  would be naked to his assault having been let to know that NATO would not come to its aid or respond to the alarm of the Dutch Peacekeepers on the ground. When Mladic's swarming para-military monkeys came, NATO stayed at home.

The Wizard of Belgrade 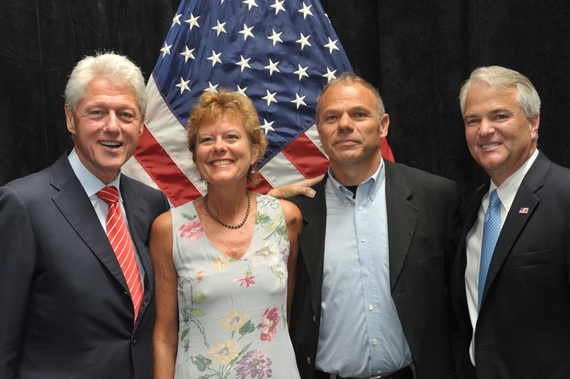 How President Clinton was pulled into this secret deal, is not entirely clear.  As someone who I have considered a friend and who provided a flattering description of my commitment as an American and Bosnian, I would like to think he was more duped without considering the full consequences. Unfortunately though, US and European diplomats exploited the fall of Srebrenica (and Zepa) by committing to Serbia's President Slobodan Milosevic that the fruits of conquest/genocide would be his. Milosevic had become a kind of figure behind the mirror, denying his involvement but viewed by western and UN diplomats as the man -- all diplomatic roads led to his palace in Belgrade.

Whether there was acquiescence or complicity before or after the fact of the fall of Srebrenica, Washington pivoted its policy toward satisfying Milosevic's territorial demands, de facto division of BiH, and acceding to his "leadership" in Serbia and Montenegro, and indeed the region (until he again took a step too far in Kosovo.) The Dayton Accords, sponsored primarily by Washington and its European allies, have delivered exactly the opposite of the inclusiveness and reintegration that President Bill Clinton so lauded in Rwanda. The mythology of peace in BiH continues to be dominated by tales of age-old hatreds as well as ethnic chauvinist politics.

Despite BiH's more advantageous position to be in the heart of Europe and the Euro-Atlantic family, it continues to suffer the fruits of genocide and division rather than the promise within grasp. This is the fault of BiH and regional political leaders, particularly those claiming Mladic's and Milosevic's crown and legacy. However, this was established by the "Paris-Dayton Accords", and most significantly by design or inertia continues to be bolstered by the current politics of Washington, the EU and its key capitals.

Nowhere in official sanitized accounts has Washington, London or Paris acknowledged its role in leaving Srebrenica naked. Generals still act brave in public while concealing their cowering while negotiating with genocidal killers in closed rooms free of accountability. Endless accounts by US and European diplomats and politicians are more mythology, or more accurately 20th Century fairytales of witches and wizards where they stand above it. The US State Department's official account chronicled in "The Secret History of Dayton" leaves this whole chapter wanting by omission. Bill Clinton's book "My Life" makes no mention. President Bill Clinton had also promised me personally that with the signing of Dayton, BiH would be accelerated toward NATO partnership, but that commitment appears also forgotten, and not just because of the spoiler role of Vladimir Putin's allies in BiH and region. From Poland and Lithuania, to Hungary and Bulgaria, NATO integration during the Clinton Administration had encouraged EU admission.

If there is one person who can take the responsibility for the failures, overt or covert, of his Administration in BiH, it is the broad politically shouldered Bill Clinton. More importantly, his speech on the 20th Anniversary of the Srebrenica Genocide can set all of BiH on a fresh and badly needed new course, away from the lines drawn by genocide in BiH and Dayton. Europe must follow, especially facing threats from Ukraine to ISIS and needing BiH more as partner and asset now. The best apology is to look frankly into the eyes of Srebrenica survivors and apologize but also offer all of BiH the welcome to Euro-Atlantic family, for real.