All eyes are once again on Ferguson after a Missouri grand jury did not come to a decision regarding Darren Wilson this past Friday. The jury, made up of nine white members and three black, is scheduled to reconvene today to make a decision. 28-year-old Darren Wilson, who shot and killed Michael Brown on August 9, 2014, will face one of three possible verdicts: a ruling of first or second degree murder, or a "No True Bill" ruling, which would indicate that the jury found insufficient evidence to charge Wilson with murder.

As protests rage on in light of the trial, many researchers and activists have begun to focus on efficient ways to monitor police-citizen interactions and lower instances of brutality. We thought this an appropriate time to shed light on the research covering the benefits and drawbacks of body camera technology. We spoke to criminologists and experts about their opinions surrounding this technology, and if body cams are the answer to preventing the next Ferguson.

Who's jumping on board? Washington D.C., Miami, Los Angeles, New York City and Chicago are among the major cities investing in police department body cameras. Washington D.C. officers have been outfitted with 165 cameras -- costing anywhere from $400 to $700 dollars each -- to run a pilot run of the new technology. Miami-Dade County recently invested $1 million for 500 cameras, and 60 cameras were issued to the NYPD this past fall.

What are people saying? Advocates have begun to embrace the idea of on-duty video camera devices as a way to provide clarity to police-citizen interactions, but opponents worry that lack of privacy and cost will make the widespread implementation of this new technology unfeasible. Many have expressed concern over the lack of policy attached to this new technology.

Have we done this in the past? In Los Angeles, the Christopher Commission made efforts to institute police dashboard cameras in reaction to the brutal Rodney King beating by LAPD officers in 1991. That reform recommendation lost steam until 2008 when the LAPD adopted widespread use of this technology.

Other camera implementation efforts came hand-in-hand with the War on Drugs, which began in the 1990s. Recorded footage from these cameras was generally used as evidence to justify police vehicle searches. Currently, implementation of police recording devices depends on individual police department procedure policies.

We spoke with Justin T. Ready, a researcher and assistant professor of criminology. He believes that body cameras would be effective means of monitoring police behavior, with the caveat that not all video footage should be used as evidence. He argues that footage can still be interpreted in different ways by different people, but that this reason alone cannot be a deterrent in trying out the technology on all police. 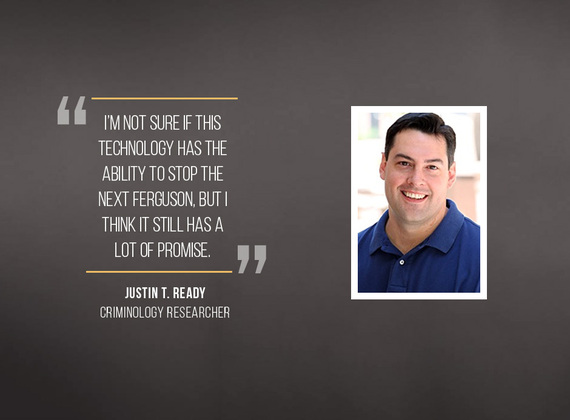 What are the reasonable expectations we need to have? Isn't camera footage objective evidence?

"When it comes to cameras, the reality is that we see these images as objective, but the problem is that those images we see are small pieces of a larger puzzle."

"It has to do with symbolic interaction and how we come to interpret behavior and things that we see, along with the meanings we assign to them. For example, take the Tiananmen Square political protest. In our country, we look at that protest and it represents something very powerful, and this spirit of democracy with this lone protester standing in the road surrounded by this line of tanks. The Chinese government broadcasted these images, and the meaning they derived was: Look at the self restraint the Chinese military exercises with these protestors.

"So you have these two world powers that broadcast the same images in order to illustrate completely different things. It happens everyday on a microlevel. When it comes to cameras, the reality is that we see these images as objective, but the problem is that those images we see are small pieces of a larger puzzle, and many of the pieces of that puzzle are not caught on camera. We think that this kind of technology can bring people together to say, 'Okay, there's going to be clarity,' but in reality, it does have potential to actually polarize groups that have very passionate views."

Bill Sousa, the director of the Center for Crime and Justice Policy and an associate professor in the Department of Criminal Justice at the University of Nevada, believes in the effectiveness of the technology, but worries about the intrusion of privacy both in regard to off-duty officers and citizens who might not want to be inadvertently filmed. 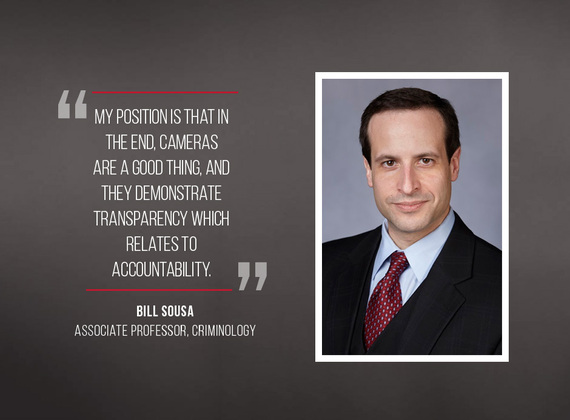 I think we would agree that it's not feasible when officers are doing something off duty -- like using the restroom -- but what makes mandatory cameras unfeasible while on duty?

"Part of the issue is that for the most part, policies vary quite a lot on this, and there is not much case law when it comes to the usage of the cameras."

"Most policies state that when officers begin to interact with citizens, they turn cameras on, and then once the interaction is complete, they turn the camera off. Now, the only time people can know that the officers have not been turning on the cameras would be in a scenario where there is a complaint against the officer, or if there is a very serious incident and they go back through the camera logs and find out that there is no recording.

"If an officer forgets to turn on the camera, or the camera malfunctions and a complaint comes in, then departments can deal with it in a certain way. But if you see multiple occurrences of an officer not turning a camera when complaints are coming in for the officer, then that's a signal that is more problematic scenario.

"The other problem comes when you consider the privacy of citizens. And this is an issue that departments struggle with, but even a lot of advocacy groups struggle with it as well. Because of course you want, for officer accountability, for the camera to always be rolling, but you have to realize that when the camera is rolling that a lot of other citizen activity is being recorded. This is the struggle with developing the policy of what happens when you're in a private residence or you are dealing with a juvenile or a victim of sexual assault or domestic violence and they don't want their information recorded. And because officers are called on for so many of life's problems, they often act as social workers. They're not trained in the same way as social workers are trained, but very often it's a one-stop-shop for people."

What do you think about body cameras on police? Do you think this technology is the only reform needed to ameliorate the issue of widespread police brutality, or would you like to see this technology implemented with other reforms? Comment or email us at debate@debateout.com