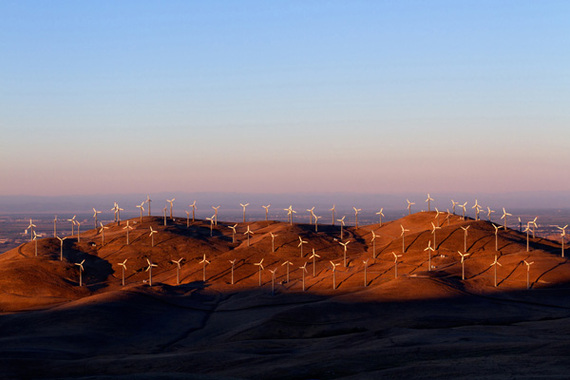 How do we know what will really make a difference in the fight against climate change?

As I reflected recently on Gov. Jerry Brown's bold new proposal -- that California run on 50 percent renewable energy within 15 years -- three responses occurred to me:

One, critics may say, as some have, so what? Even if California succeeds in meeting this most ambitious renewable energy goal in the nation, but the rest of the world does not follow suit, the Golden State's efforts will make no dent in global warming for our children and our children's children. So bully for California for trying, but we could still be cooked.

Two, with California having been in the lead on the fight against climate change for decades, one could say there is something "been there, done that" about this development. (See "Rays of Hope in California.")

But then came response number three, which requires me to back up a little and tell a story. Several years ago, I had the good fortune of meeting the man I think of as our modern-day Thoreau: the poet Wendell Berry. I was visiting Kentucky at the time to report on Berry's participation in a sit-in at that state's governor's office to protest mountaintop removal coal mining.

Berry was one of a small group comprised of farmers, former coal miners, university professors, and activists that was unlike any I'd seen before: It seemed less a protest and more a gathering of friends with a purpose.

Still, I wondered, what difference could such a group make by confronting a governor who was known to support the blasting of mountaintops? Did they really imagine he would withdraw his support from the powerful coal industry because they had shown up with banjos and signs, demanding that he protect their land and water?

So shortly before the protest began, I approached Berry, who had a toothbrush in his jacket pocket in case he was arrested, and asked: "Do you really think this protest will make a difference?" His answer surprised me -- and stuck with me to this day.

Building on years of climate leadership in California, Gov. Brown now proposes to not only increase California's use of renewables to 50 percent, but also reduce the amount of oil used by cars and trucks by up to 50 percent, and double the energy efficiency of existing buildings by 2030.

We do not know if this vision -- even if actualized, as many think is possible -- can make a practical difference on climate change. But, as Berry might say, that's the wrong question. The right question is: Is it the right thing to do? And, as Gov. Brown seems to know, it is the right thing to do.

As the Governor said when making the announcement while taking the oath of office for a fourth term on Jan. 5, 2015:

"The challenge is to build for the future, not steal from it, to live within our means and to keep California ever golden and creative."

In the first part of that statement, I hear a voice of conscience -- of a life lived according to the day-to-day effort to do the right thing, which matters perhaps most of all in the face of challenges as great and uncertain as climate change.

And that's my third and final response.

This post appeared in an earlier version on Moms Clean Air Force.