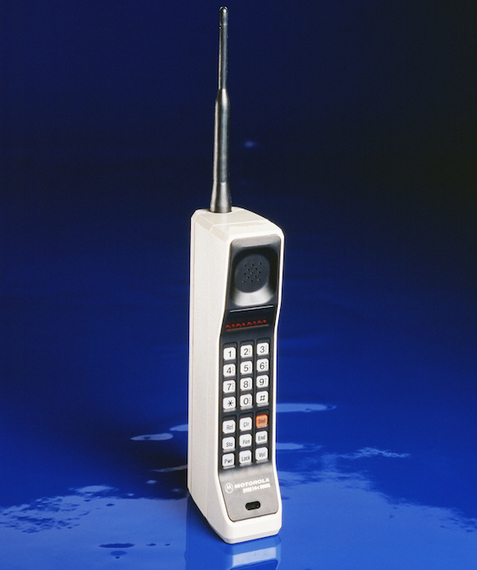 This week we commemorate the 30th anniversary of the first handheld cell phone, the Motorola DynaTAC 8000X (pictured abpve), going on sale (which you can read more about here).

But will we one day rue the day cell phones became the world's most ubiquitous gadget the way we discovered, after 30 years, that cigarettes can kill you?

Cell phone radiation isn't good for you. But is it bad for you? If it is bad, will the bad turn into fatal? And even if cell phones proved harmful to our health -- then what?

How many smokers do you know know they are indulging in a death-defying (and disgusting) activity? And how many smokers acknowledge this knowledge but simply shrug their shoulders and continue to light up?

Of course there's a huge difference between the cancerous consequences of smoking and texting a friend that you're running late. We don't need to smoke. But in today's hyper-connected society, a case can be made that we need our cell phone.

How bad are they?

For nearly as long as cell phones have been around there have been periodic scientific reports about the potential harmful effects from the radiation they emit. Cell phone radiation could cause cancer, or, more specifically, brain cancer. It can disturb your sleep. It can lower a man's sperm count. It's even been blamed for a drop in honeybee populations.

But none of these scientific researches has turned up anything much beyond anecdotal results, the old ridiculously-massive-dose-causation canard, or the Platonic logic of "cell phones emit radiation, radiation is bad for you, ergo, cell phones are bad for you."

As CNN's Dr. Sanjay Gupta pointed out in one of the more informed and reasonable reports on the link between cell phone use and brain cancer, this is because cell phones have only been around 30 years. No one (except the Dutch, in an indirect way) has been able to conduct a controlled study over the decades it would take to prove a definitive cause-and-effect.

The problem is low levels of radio frequency (RF) radiation. All electronic devices emit some kind of radiation to varying degrees, but we usually maintain a degree of distance from most radio devices, diffusing any potentially harmful effects.

But we have an up close and personal relationship with cell phones, exacerbating the radiation problem. It's essentially the difference between taking a brief walk in the sun fully clothed and laying on a beach nearly naked for hours on end. The former is good for you. The latter leaves you with skin the consistency of fine Corinthian leather and melanoma.

You may have noticed all cell phones list something called SAR (Specific Absorption Rate). Ostensibly, SAR indicates how much of this RF radiation emitted from a cell phone is absorbed into your body.

But SAR is nearly worthless as a consumer safety guide. Even the FCC, which requires manufacturers to ensure phones don't exceed a specific level, admits SAR specs are at best misleading.

According to the agency's Specific Absorption Rate (SAR) For Cell phones: What It Means For You guide:

a single SAR value does not provide sufficient information about the amount of RF exposure under typical usage conditions to reliably compare individual cell phone models.

What can I do?

A lot of folks hoping to capitalize on your cell phone fears shill SAR radiation shields and air tube earphones, but no reliable, objective testing has proven any add-on solutions are effective.

As Dr. Gupta points out, using a wired headset is probably the easiest anti-radiation precaution. This piece from CNET offers some good -- if rudimentary and arguably equally useless (how, exactly, do you carry a cell phone yet keep it an inch away from your body at the same time, and how do you know where the antenna is?) -- advice on how to minimize your exposure to cell phone radiation, along with a list of the SARs of many smartphone makes and models (unfortunately, not searchable by make and model).

If/when a link between cell use and brain cancer is ever established and confirmed (and neither the National Cancer Institute nor the Mayo Clinic acknowledge any connection), I'm not sure what the government can do. The Feds aren't even willing to make proven-to-kill, non-essential cigarettes illegal.

So my phone will kill me. Eventually. And...?

In many ways the whole scientific research cell phone-causes-brain cancer kerfuffle resembles the rumblings about the connections between cigarette smoking and lung disease. The first connections were made in the 1930s, but it took more than 30 years for the scientific community to make the ultimate determination and for governments to take action.

Turns out, where there was scientific suspicion smoke, there was lung disease. I unhappily suspect we will reach the same eventual conclusion where cell phone use is concerned.

Why did it take so long for us to accept the smoking/cancer connection?

In his November 2001 article "Short History of Lung Cancer" in the Toxicological Journal, researcher Hanspeter Witschi of the University of California Davis noted:

...it took a long time until the truth was fully accepted. Smokers, including many physicians, who enjoyed cigarettes could or would not want to imagine or refused to believe that the habit (addiction would be more appropriate) was detrimental to their health.

Replace the word "smokers" and "cigarettes" with "cell phone users" and "cell phones" and this human behavioral observation could be earily precient.

I myself often espouse a cynical view of maintaining one's health in our modern technological society. It just seems everything is bad for you and that life is ultimately a fatal disease.

So, yes, cell phones might kill you. But based on our past behavior toward things we want that we know are harmful to us, even if the cellphone/cancer conditional turned into a definite we'd fatalistically shrug our shoulders and take the next call.