A key question as Congress finalizes funding for this fiscal year is whether it will give the Census Bureau what it needs to prepare for the next census in 2020. A House-passed funding bill from June fell far short, as we explained then. In its final spending measure, Congress should acknowledge that the Census Bureau -- as it has in past decades -- must prepare early to get the nation's head-count right.

While the 2020 Census might seem far off . . . 2015 is a pivotal year for decisions that will determine the efficacy of promising, but complex, new initiatives [to improve quality and cut costs]. . . . These new initiatives show great promise, but they need to be tested thoroughly and in census-like environments to confirm their efficacy.

Much is at stake, including the quality of the data to allocate congressional seats, draw voting districts, allocate hundreds of billions of dollars a year in federal funding, and help businesses know where to open stores and towns know where to open schools. The census is also the foundation for other household surveys, which give policymakers and the public vital data on issues from poverty to commuting patterns. 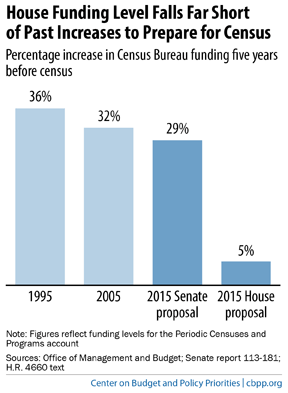 Under pressure from Congress to cut costs, Census has committed to conduct the 2020 census for the same cost as the 2010 census, despite inflation, population growth, and the growing tendency of busy Americans to ignore surveys. The Census Bureau says it thinks it can still conduct a successful census, but only if it can test new software, methods, and machinery before then. Shortchanging this essential preparatory work would be penny wise and pound foolish.