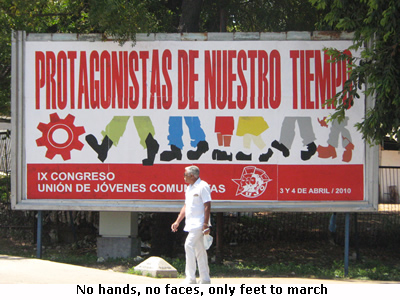 The biggest meeting of the Union of Young Communists (UJC) ended in Havana, but its older relative, the Party, still hasn't announced the date it will hold its Sixth Congress. Raul Castro affirmed, in early 2009, that he would call, very soon, a national conference of the Communist Party of Cuba but at this point no one can find it on the calendar. So the UJC has gone ahead and met in the Palace of Conventions and discussed topics that might have led to fruitful debates if they had occurred within a framework of true respect.

Under the motto "All for the Revolution," hundreds of young faces observed the presidential table full of officials who have already lived more than six decades. The older generation was not there to tell them the latest news, "The country is yours, it is up to you, now, to decide its directions," but rather to exhort them to sacrifice, admonish them for their lack of fighting spirit, and to extract from them promises of continuity and eternal fidelity. It is the type of behavior that a political party uses to attract its quarry, but in the case of Cuba the UJC is the only youth organization permitted under the law. It is noteworthy that at the age in which we try on various personas and defend the most incredible causes, our youth is only admitted to membership under the red card. Many of them, in freer circumstances, would swell the ranks of a conservation group, sign on with some union activists, or join together to demand to end compulsory military service.

Those who today form the UJC were born at the beginning of the Special Period, when toys were not seen in the ration shops and they could only drink milk, legally, until they were seven. They grew up thanks to the black market and wore shoes because their parents diverted State resources or asked an exiled relative for help in buying them. This is a generation that came of age in the midst of the tourist apartheid that blocked Cubans from entering hotels or accessing certain services; children nursed on empty slogans in the schools and the language of monotony at home. Despite their promises of loyalty, I suspect they nurture thoughts of revenge, of that moment when they will break all the promises they made to their elders.