So I was delighted when I heard law school professor, Mary Brigid McManamon a week or so ago on CNN correctly clarify how unsettled the issue really is. She pointed out how the language of the "Naturalization Act" was changed way back in 1795. The Naturalization Act of 1790 read as follows:

The Naturalization Act was repealed in 1795 to read as follows:

It seems, however (and very interestingly), that if the federal courts weigh in, it will be at the urging of Donald Trump. I recently posted a tweet after seeing Professor McManamon on CNN. The tweet was re-tweeted by Donald Trump this morning and has since been re-tweeted hundreds of times. 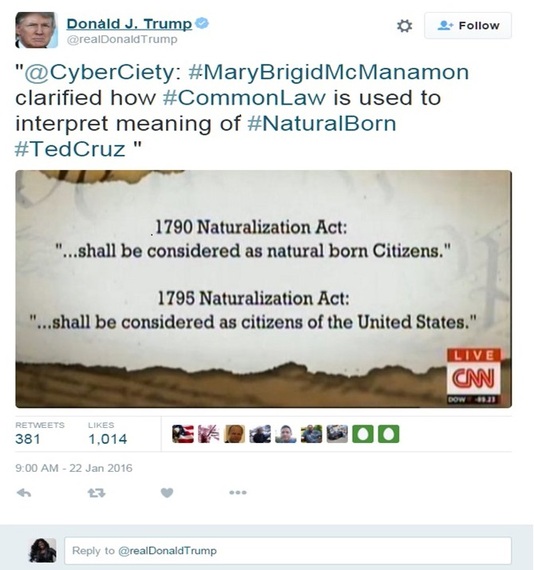 Donald Trump has advised Ted Cruz to seek a declaratory judgment from a United States federal court. Nevertheless, Donald Trump may well have standing to bring his own federal lawsuit. Furthermore, if the weight of his tweets and re-tweets have any influence, I could very well see such a case being accepted for review by the United States Supreme Court.

Who knew that Donald Trump could - once and for all - prompt a resolution of this issue and the presidential candidate isn't even African American...