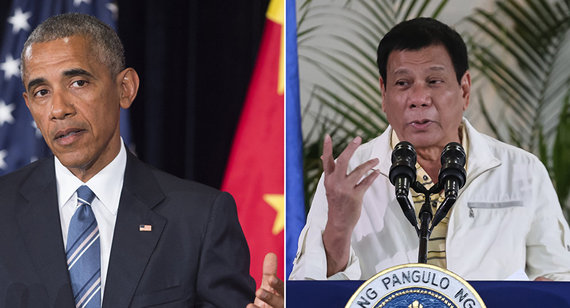 "I am ready to not really break ties [with America] but we will open alliances with China and . . . Medvedev [Russia]," the Philippines' firebrand leader Rodrigo Duterte recently exclaimed. "I will open up the Philippines for them to do business, alliances of trade and commerce."

In a matter of months, the Philippines has jumped from likening China to Nazi Germany to flirting with the idea of an alliance with it. Astonishingly, Manila and Beijing are currently negotiating a twenty-five-year bilateral military agreement, allowing Manila to purchase Chinese weapons. By all measures, this is geopolitical drama on steroids.

To be fair, his astronomical popularity at home, his grip on the Philippine legislature and the sheer force of his political will collectively give Duterte some leeway to introduce significant changes in the country's domestic and foreign policy landscape.

But what is at stake here? Is the new Philippine leader going the way of Hugo Chavez, Venezuela's former populist leader who built an alliance with China against America, or instead are we witnessing a series of calibrated tirades as a prelude to some reconfiguration in the Philippines-China-America triangle?

What is sure for now is that Duterte alone is reshaping regional geopolitical dynamics. Yet it is still unlikely that he will end the Philippines' alliance with its oldest strategic partner. Ultimately, an independent foreign policy doesn't mean jumping from one camp to the other, but instead pursuing an equi-proximate strategy, where you can benefit from constructive relationships with all relevant powers.

Moreover, the Philippines, with one of Southeast Asia's weakest militaries, has to recognize that without American military support, no matter how limited and unequivocal, it will have limited leverage in any bilateral dealing with giant China. After all, only the United States has the requisite capabilities to keep Chinese maritime ambitions in check.

Almost three months since the conclusion of the Philippines' landmark arbitration case against China, the Duterte administration has repeatedly sought to downplay the final award, which nullified the bulk of China's "historic rights" claims, censured its massive and ecologically damaging island-building project in the Spratlys and affirmed the Philippines' two-hundred-nautical-mile Exclusive Economic Zone claims.

Though the award concerns an arbitration case between the Philippines and China, it carries huge implications for the region and the international order. First of all, Manila's lawfare strategy proved that the United Nations Convention on the Law of the Sea is relevant to the resolution of the West Philippine Sea disputes.

Moreover, it also proved that China's claim and increasingly assertive behavior in the area are not in consonance with prevailing international law. In short, the arbitration case represented a critical juncture in East Asia's evolving pecking order, potentially turning the tide against China.

Yet the Duterte administration has constantly emphasized that the arbitration case is a purely bilateral issue and, therefore, there is no need to raise it in multilateral fora such as the Association of Southeast Asian Nations. If anything, the new Philippine government has excruciatingly sought shun mentioning it in its diplomatic statements.

"No, I will only bring the [arbitration] issue face-to-face [with China] . . . because if you quarrel with them now, claim sovereignty, make noise here and there, they might not just even want to talk," Duterte has said, invoking the mantra of pragmatism and conflict avoidance.

"Let us create an environment where we can sit down and talk directly, and that is the time I would say, we proceed from here." The impact on the regional strategic dynamics is palpable. Almost singlehandedly, Duterte has made it almost impossible for the United States to mobilize multilateral pressure against China, at least in the meantime.

As one Brussels-based official at the European External Action Service recently told me, "It was pretty difficult for the European Union to make a strong statement on the final award, when the very country that filed it suddenly changed its tone."

Throughout the past two months, several foreign policy experts and former officials across Southeast Asia have told me that Duterte's call for engagement with China left little appetite among regional states for confronting the Asian juggernaut on the West Philippine Sea issue.

Over the past few years, the Obama administration, under the Pivot to Asia policy, has adopted what the late political scientist Gerald Segal called a "constrainment" strategy based on a clever combination of diplomatic pressure on and expanded military footprint close to an adventurous China.

But with the Manila government suddenly calling for bilateral engagement rather than multilateral pressure, and seeking an "alliance" and "close friendship" with its former enemy, Washington has suddenly found itself in uncharted waters. Duterte has raised the stakes by even questioning existing security agreements with America, casting a long shadow on bilateral military cooperation.

Over the past few weeks, Duterte has warned about the expulsion of American Special Forces from the Philippines' southern island of Mindanao, suspension of annual military exercises and joint patrols in the West Philippine Sea, and even the abrogation of existing security agreements.

There are a number of factors that may explain Duterte's long series of tirades against America in recent weeks. To begin with, they could very well be part of Duterte's retaliation against Washington's increasingly vocal criticism of his campaign against illegal drugs.

No less than President Barack Obama has openly confronted Duterte on the issue. "We're not going to back off on our position that if we're working with a country, whether it's on anti-terrorism, whether it's on going after drug traffickers, as despicable as these networks may be, as much as damage as they do, it is important from our perspective to make sure that we do it the right way," Obama warned his Philippine counterpart.

Not bereft of colorful language, Duterte has repeatedly lashed out at the American leader in one occasion after the other. The United Nations and the European Union have not been spared either.

Another reason is his understanding of what an "independent" Philippine foreign policy should look like. Duterte has consistently made it clear that he wants his country to be less dependent on America. A self-described "socialist," with a left-leaning "anti-imperialist" mindset, Duterte has always made it clear that he, unlike his predecessors, isn't necessarily a fan of America and the West.

He has described any Western criticism of his domestic policies, particularly his "war on drugs," as interference in Philippine sovereignty. "I am no American puppet. I am the president of a sovereign country and I am not answerable to anyone except the Filipino people," Duterte once passionately declared.

By dangling the Beijing and Moscow cards, Duterte, in a Cold War-style fashion, is trying to signal his independence from Washington. Then there is his upcoming visit to Beijing, where the two neighbors are expected to negotiate the parameters of a potential modus vivendi in the West Philippine Sea. It is likely that Duterte's recent anti-American tirades are his way of gaining the goodwill of his Chinese counterparts.

He is showing that he is willing to tinker with existing security relations with America, which have always been a source of anxiety for China. Joint patrols with America in the South China Sea have been suspended, and same could happen to joint exercises in the area.

For instance, as part of a grand bargain with China, it is possible that Duterte could move ahead with indefinitely suspending joint patrols with America in the West Philippine Sea, relocate the annual joint Balikatan ("shoulder-to-shoulder") exercises away from the China-claimed waters and not fully operationalize the recently-signed Enhanced Defense Cooperation Agreement.

Given America's massive popularity among Filipino voters and its close ties with the Philippine armed forces, however, it is unlikely that Duterte will move ahead with altogether severing bilateral security agreements. Last year, 92 percent of Filipinos expressed favorable ratings of America, the highest in the world, while America is responsible for 75 percent of the Philippines' military hardware. Over the decades, America has provided full-spectrum support, from financing and intelligence to logistics and training, for the Philippine security establishment.

Not to mention, incorporating Russian-Chinese military technology into the largely American-trained and -equipped Philippine military also raises technical difficulties and may require a long period of reconfiguration. Unless China grants the Philippines any meaningful concessions in the West Philippine Sea, it is also unlikely that Duterte's current strategic flirtation with China is sustainable.

What is more likely is that Duterte will follow in the footsteps of the Turkish strongman, Recep Tayyip Erdoğan, who hasn't shied away from diplomatic dust-ups with America, strategic flirtation with Russia and China, and restricting American military access to critical Turkish bases, whenever his human rights and democratic credentials come under Western criticism.

Yet military-to-military relations between America and Turkey have remained robust through and through.

Duterte 1st 100 days in office has been a refreshing combination of geopolitical dynamism and precarious bluster. In the coming months, however, the Philippine government will have to flesh out an actual strategy for achieving a long-overdue independent foreign policy, which keeps rivals at bay, allies at ease, and hundred million souls safe.

This piece was partly based on an earlier essay for The National Interest.