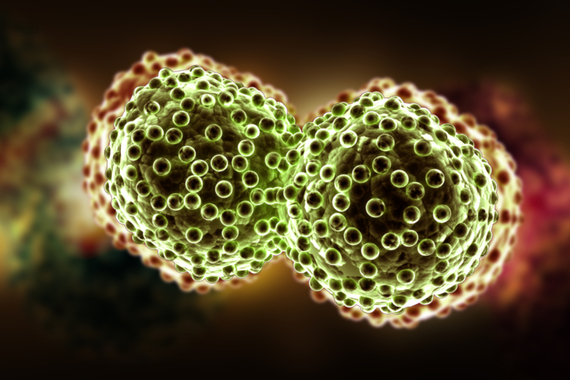 Early detection is one of the most effective ways to beat cancer. That's why some recent studies, in which scientists detected it in people long before symptoms began, have cancer researchers so excited. The coolest part? These scientists weren't even looking for signs of cancer. DNA-based detection tools have gotten sensitive enough that it now appears possible to identify precancerous cells.

For years, people thought cancer was like a toggle switch: a good cell goes bad, and flip! Cancer. If that cell divides rapidly enough, and successfully evades the immune system, it grows into a tumor. Newer research has shown that the path from a healthy cell to a cancerous one is actually long and winding. Cells must go through a series of mutations over time, slowly transforming from normal to slightly aberrant to full-on cancer.

Understanding this process creates a major opportunity to spot problem cells and intervene before they make it to the lethal final stage. But making something of that opportunity depends on having technology sensitive enough to find these rogue cells--and coming up with a way to eradicate them without harming their healthy neighbors.

That's why these new studies have cancer researchers so fired up. A team led by Steven McCarroll from the Broad Institute of MIT and Harvard took blood samples from more than 12,000 Swedish people and sequenced their genes, looking for molecular indicators linked to schizophrenia. As they analyzed the data, though, they kept bumping into mutations known to be associated with blood cancers. This was puzzling, as none of the people had blood cancer.

McCarroll's team stuck with it, following health outcomes of these people for as long as seven years. Of the people who went on to develop some form of blood cancer during that time, more than 40 percent were those with the cancer-associated mutations the earlier sequencing had identified. Zooming in on two patients later diagnosed with acute myeloid leukemia, the team determined that those cancers had developed directly from the precancerous cells spotted in the DNA sequencing project.

Analysis of a different patient group shows the potential for early detection of other types of cancer. As more women choose non-invasive prenatal tests, or DNA-based genetic tests instead of traditional amniocentesis, at least one diagnostic provider has reported that these tests can also pick up early traces of cancer in the mother. (Because the test is based on the mother's blood, it analyzes DNA from both the baby and the mother.) Sequenom, maker of the MaterniT21 Plus genetic test for fetal chromosomal abnormalities, presented data at a conference earlier this year showing that 26 mothers with these mutations in their DNA were later diagnosed with cancer--most frequently breast, colon, or uterine. Without the red flag from the prenatal tests, it could have been years before these women developed symptoms and were diagnosed.

A large number of companies around the world are developing so-called liquid biopsies, or tests to find pieces of DNA sloughed off from a tumor and circulating in a person's bloodstream. If they succeed, it could become possible to screen for cancer anytime you have blood drawn for something as simple as a cholesterol test.

This ability to spot precancerous cells could become pivotal in oncology. It could also be problematic. As we've learned from long experience with imaging technology like X-rays and MRIs, early detection can lead to expensive, painful, and sometimes unnecessary medical intervention. Whole-body scans, for instance, often detect very small clusters of cancer cells, but long-term studies have shown that the majority of these don't grow up to be big, scary tumors. Similarly, recent adjustments to mammogram guidelines were based on the realization that the previously recommended yearly tests resulted in too many unnecessary biopsies.

So we need to find a way to spot cancer early, while also being certain that mutations we find are really on the path to becoming a potentially lethal tumor. Then we'll need the intervention. How will we quarantine these cells? How will we prevent them from acquiring the final mutations that would graduate them to cancer? How will we determine where in the body such cells may be hiding out, when the DNA in the bloodstream could have come from anywhere?

It'll take a lot of work, and millions of research dollars, to answer these questions. But these new studies suggest the possibility for significant progress in cancer treatment.