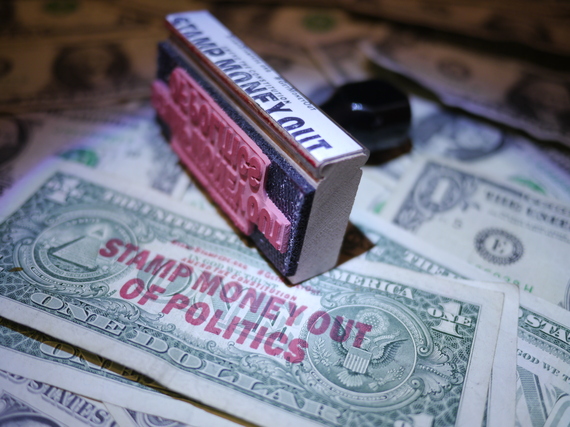 Our representative democracy has been on a crash course for corruption ever since the Supreme Court of the United States issued its decision in Citizens United v FEC back in 2010. That decision contributed to an explosion in political spending at the national level that's never been seen before, reaching an estimated $7 BILLION in 2012 elections. It has come to a point where the only people represented in Washington are those who can pay a high-priced lobbyist and bankroll election campaigns. With the recent Supreme Court ruling in McCutcheon v FEC, that will eliminate the aggregate limit on campaign contributions, the situation is about to get even worse.

But 'We the People' are fighting back. Over 15,000 people across the country are legally stamping their money with messages like, "Not to be Used for Bribing Politicians," "Stamp Money Out of Politics," and "Corporations Are Not People." We're helping to build a rapidly growing grassroots movement across the country to #GetMoneyOut of politics. Every stamped bill reaches nearly 1,000 people and sends a single unified message to OUR representatives: "We're mad as hell and we aren't going to take it anymore."

This is a visual petition on steroids. It's monetary jiu jitsu -- using money to get money out of politics. More and more people are joining every day and together we're creating a mass visual demonstration of support for reforms that will restore our republic.

Since the United States Congress moves with the speed and agility of a tortoise, people are looking to the states to lead the way on corruption reform. To borrow a line made famous by former Supreme Court Justice Louis Brandeis, states serve as "laboratories of democracy."

Sixteen states -- including Hawaii -- have already called for a constitutional amendment to overturn a supreme court ruling that said money is free speech and fix the problems that were compounded by Citizens United.

Now, residents of Hawaii are fighting to pass legislation that would break the stranglehold that corporations and the ultra-wealthy have on the statehouse in Honolulu by creating citizen-funded state elections. This will finally put democracy back in the hands of the people where it belongs. Voter Owned Hawaii has asked the Stampede to help with their campaign and we're happy to be able to play a role in passing this legislation which is overwhelmingly supported by the people of Hawaii.

Reform in Hawaii is desperately needed so that legislators are no longer beholden to the corporations and the wealthy elite. And it's critically important as a model for the national movement to get money out of politics. Success in Hawaii will show other states that it's possible to limit the corrosive influence of special interest money even within the constraints of the current Supreme Court rulings.

Preserving democracy is nothing new for voters in Hawaii. They have been leaders in good government long before Citizens United changed the rules of the game. During the 1978 Constitutional Convention in Hawaii, delegates fought hard to create a citizen-funded program for elections. Since then legislators let it deteriorate, many times deliberately.

But now we have an opportunity to breathe life back into the fair elections program.

It's time to have a system of government that's responsive to the many, not the money. We must strengthen our resolve to enact real reform. HB 1481 offers a way forward for the residents of Hawaii and a model for the country to follow. It's time to Stamp Money Out of Politics.