Why? Because the White House, US Treasury, and Federal Housing Finance Authority have been stonewalling discovery requests by investors who want to know exactly why the GSEs were put into conservatorship in the first place.

This is important for several reasons--not least is the reputed $36 billion in preferred Fannie stock alone that was 'taken' by the government when it claimed Fannie and Freddie were in danger of collapse, and so had to be recapitalized with government support to the tune of $187 billion.

But that has been paid back in spades, and the GSEs are not being allowed to recapitalize. This is when commercial banks that were granted some $350 billion in TARP funds by the same Republican Treasury Secretary under GW Bush (Henry Paulson, former Chairman of Goldman Sachs) were allowed to be recapitalized. So Wall Street benefited, but not Main Street homeowners that for the most part still depend on Fannie and Freddie to guarantee most home loans.

Instead, due to a last minute (2012) 'tweak' to the original conservatorship order, all profits go into the Treasury General Fund, which has raised suspicions that Treasury is behind the move to capture all profits for its own uses, rather than returning value to preferred stockholders, at least. How is that fair when the GSEs weren't responsible for the bubble, or subprime loans, or the Great Recession, at all?

We know this because some $14 billion in settlements have already been recovered from those commercial banks and Wall Street entities that submitted fraudulently underwritten mortgages misrepresenting their loan quality to Fannie and Freddie.

The request, made by Fairholme Funds, is a big win for them in the battle to review federally sealed documents in its case against the United States government. Fairholme is one of several former investors in the government-sponsored enterprises who say their ownership stake was illegally taken from them by the federal government during conservatorship. They are fighting in court to get that stake returned.

The more than ten thousand discovery documents will be available to the United States District Court of Appeals in Washington D.C. and the United States District Court. There is plenty of evidence that Fannie and Freddie were still solvent at the time. Even Treasury Secretary Henry Paulson reassured Congress of their solvency, while Bear Stearns was being purchased by JP Morgan in 2007.

And mortgage delinquency rates are almost back to historical levels. For instance, June's existing-home sales report showed just 8 percent of sales were comprised of foreclosed homes, lowest since 2007 and the housing bust. 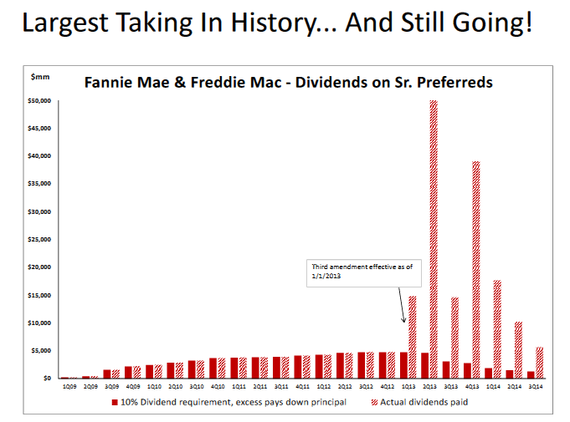 The profits have been enormous for US Treasury. "Taxpayers have been paid back and the companies are now left with little capital due to the net worth sweep," says Seeking Alpha. "Based on Judge Lamberth's ruling (of last year dismissing Fairholmes suit), the government could be sued for a taking if the companies are liquidated. Reform must include adequate compensation to shareholders, as well as a method to bring capital back onto the balance sheet. After 2010, solvency was never a problem."

And now we have Judge Sweeney ruling in favor of discovery that will enable investors to untangle the 'rest of the story'.